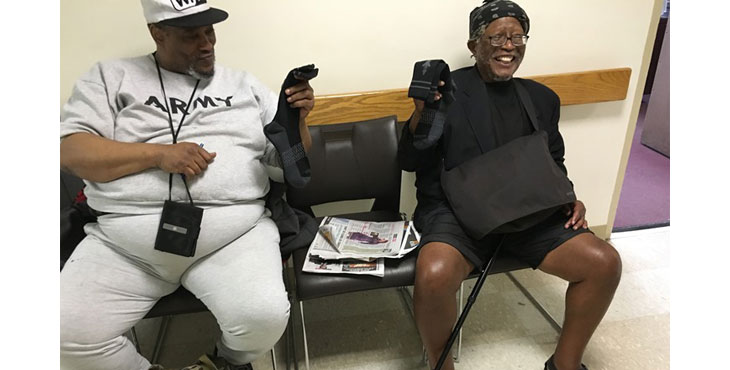 Something as simple as a new pair of socks can be meaningful to someone in need.

Irwin says the story of the socks goes back to the beginning of 2016. “Shortly after the New Year, I was contacted by the National VA Homeless Program Office about a new partnership they were developing with the Bombas Sock company.  Bombas had reached out to senior VA leadership, wanting to donate their state-of-the-art technical socks to homeless Veterans.”

Philanthropy is the Bombas Sock company’s M-O. The Bombas website states that “Bombas Socks are the number one most requested clothing item at homeless shelters.”  That information, according to the company,  led to a plan for Bombas to donate a pair of socks for every pair sold. “The more socks we sell, the more we can donate. And how do you sell a lot of socks? Design something better than anything on the market.”

Bombas socks are crafted to be ultra-comfortable and durable with moisture-wicking properties and blister protection.   VA medical centers in New York City, specifically the James J. Peters VAMC and the New York Harbor Health Care System, readily agreed to be test sites for the distribution of the socks to homeless Veterans.  The goal was to come up with a model for a larger, national distribution.

At the time, there were just shy of 700 homeless Veterans remaining in New York City, and Bombas did not hesitate to send that many pairs of socks. NY Harbor received 600 pairs and Bronx received 100 for distribution to Veterans in VA funded residential care programs and transitional housing programs, to those in New York City shelters, and to distribute onsite at the medical centers and outpatient clinics.

By all measures, the socks were a big hit with Veterans. “Veterans were genuinely appreciative that they were thought of to receive something new and of good quality,” said Kalb.