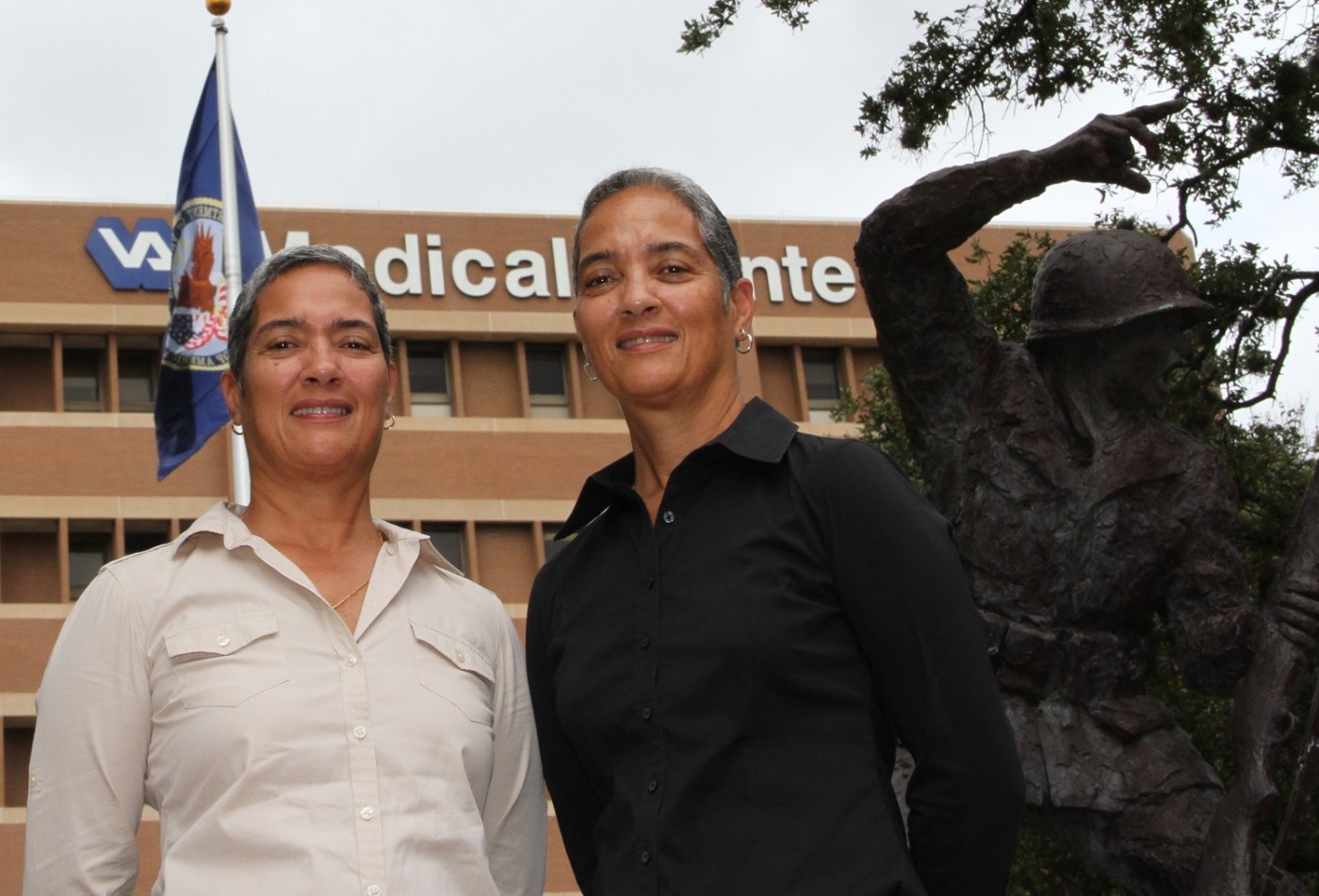 When you look at VA employees and identical twins Judith Ruiz and Yolanda Ruiz-Isales, there are the obvious physical similarities you’d expect from twins. Even on paper, the similarities will make you do a double-take. Army careers of 27 years, all in nursing, degrees in nursing, advanced degrees in nursing management and officer training courses that span three decades.

Even at the South Texas Veterans Health Care System (STVHCS), they took similar paths. Judith is the Admissions Intake Coordinator for Polytrauma while Yolanda, or Jolie, as she is affectionately called by her twin, is the Nurse Manager for the Outpatient Surgical Specialty Clinics. But the similarity that you can’t see in a haircut, or hear in an accent, is the most important one for the patients at South Texas…their unwavering passion and dedication to Veteran patient care.

That dedication to serving country and becoming nurses was cultivated at an early age by an aunt, who was herself an Army nurse during the Korean War, as well as a father who served during the same period.

Unlike many young adults who have difficulty figuring out what they wanted to do “when they grow up,” the Ruiz sisters had it figured out. “I got my commission as a second lieutenant and then I was directed to go on active duty,” Judith said. “Jolie did not want to stay behind, so she got a direct accession commission and we both were assigned together on our first assignment on the buddy system.”

Their kinship never wavered during many assignments. The sisters found themselves together several more times at officer training, Walter Reed, Korea and in graduate school.

The one thing that eventually separated them was when their mother fell ill. “We’ve always served together,” said Yolanda. “The reason we retired was that our mother was ill.”

“We had a great need to be engaged in her life and take care of her,” Yolanda added. “My father passed away and she came to live with us and so we came to take care of our mother.”

A Rare Opportunity for Army Nurses

Proud of their military careers, the sisters reflected on how fortunate they are. “One of the proudest things about my military career is that we both had the opportunity to go to War College,” Yolanda said. “I went to the Industrial College of the Armed Forces, and Judith did her fellowship at the Army Environmental Policy Institute, which is a War College curriculum. “To have the opportunity to do that as Army nurses was rare at the time,” she explained.

After they retired in 2012 both Judith and Yolanda Ruiz parlayed their knowledge of military systems and culture into successful VA careers. They are also taking that knowledge and experience to their respective units and using it to train and mentor their fellow nurses and VA employees.

Transitioning to the VA

While Yolanda began her new career at STVHCS, Judith became their mother’s full time caretaker. They both knew they had to continue to serve. Yolanda touted the visits with her father when he was a VA patient as well as the beginnings of her nursing career, doing her rounds in a VA hospital. “I always was inspired by serving, and serving Veterans, so when I retired, I knew that I only had one option. I applied and I got selected to come here as a nurse manager.”

After their mother passed, Judith went to join her sister yet once again, at the STVHCS. She was very excited to get an opportunity to use her skillset along with her passion helping Veterans and servicemembers with brain injuries. “When I was active duty, I worked closely with traumatic brain injury and a task force that was stood up by the surgeon general when the war broke out.” Judith was a natural fit for the polytrauma unit because she had previously worked with physical therapists and occupational therapists in multidisciplinary teams.

Both Judith and Yolanda have made positive changes for patient care in their respective areas. “My success story is right-sizing our department so we have real available leadership to the front line staff” Yolanda explained. “That is my significant accomplishment.”

Judith takes pride in the impact that she has not only on patients but their families. “The family members realize that I am an advocate for them,” Judith stated. “The way they come in, and then the way that they leave this hospital, the way they leave is definitely not the way they arrived, and seeing that transition really satisfies me,” she added.

Having a Veteran Recover Gives Me Joy

Judith smiles when recalling the story of arranging Class A (formal) uniforms for a pair of Marines, so they could attend their holiday ball. “Putting those pieces together so that a Veteran has a fair chance to come to our polytrauma unitand recover is what gives me joy.”

The Ruiz sisters said it is different when one Veteran assists another. “As a nurse manager, I have an open door policy,” Yolanda explained. “The patients know that when they have an issue where their needs are not being met, they can just knock on my door.” She went on to explain that the same military culture translates into her patient care. “I don’t even tell them that I was in the military,” Yolanda explained. “They know by my behavior and my posturing that I was. It’s a culture.”

Judith’s supervisor, Rick Reusch, Associate Chief of Polytrauma/Spinal Cord Nursing Service, said that Veteran status has paid dividends. “Judith’s job requires a significant amount of interaction with our DoD (Department of Defense) counterparts,” Reusch said. “She knows the systems, how to navigate them and what questions to ask.” Reusch added that what makes Judith and her sister special is they have taken a journey of continuing service.

Judith and Yolanda say serving Veterans is simple. “The Veterans need to feel like there is someone connecting them to this very large and complex healthcare system,” Yolanda said. “But you have to instill that mindset and you have to live that culture every day…that’s leadership!”

About the Author: Steve Goetsch is the Public Affairs Specialist at the South Texas Veterans Health Care System.