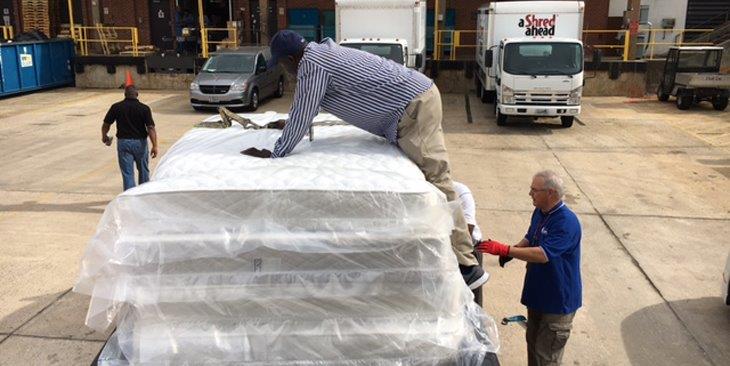 When once-homeless Army Veteran Tyrone Bradley moved into his Columbia, South Carolina, apartment in the fall of 2015, he slept on an air mattress. That sure beat spending the night on a cot in a crowded transitional living facility, and so he made do. A regular mattress for his bedroom was an expense he couldn’t yet afford.

And so when his case manager called from the Wm. Jennings Bryan Dorn VA Medical Center (VAMC) to say he had a queen-size mattress and box spring ready for delivery—obtained through the second-annual VA Beds for Homeless Veterans initiative—Bradley was elated.

“Without this bed,” he said, “I’d still be sleeping on an air mattress today.”

Providing More Than Just a Place to Sleep

Connecting Veterans like Bradley to permanent housing—and to the services they need to stay housed—are our top priorities at VA.

Yet our commitment does not end there. We also collaborate with many other organizations—businesses, nonprofits, the faith community—to help Veterans acquire furnishings so they can feel at home in their new living spaces.

A perfect example of one such partnership is Beds for Homeless Veterans, our collaboration with Veterans Canteen Service (VCS) that this year is providing 2,150 new Serta mattress/box spring sets and 2,000 home essentials kits to formerly homeless Veterans nationwide. It’s one way that VA leverages community resources to provide Veterans with the fresh start they’ve earned.

Also benefiting is William McCullough, a Navy Veteran who endured a long struggle to exit homelessness. “I had nothing—nowhere to live, no money—for years,” McCullough said.

His homelessness ended in 2014 when he, like Bradley, secured a new home with a U.S. Department of Housing and Urban Development-VA Supportive Housing (HUD-VASH) voucher through the Dorn VA. His restless nights also became a thing of the past, thanks to Beds for Homeless Veterans.

“I had secured a home, a bank account and a vehicle,” McCullough said. “And when VA called to let me know that I also had a new queen-sized mattress coming, it was just wonderful.”

The Beds for Homeless Veterans project was born in 2014, when officials with VCS asked how they could partner with VHA to better serve Veterans like Bradley and McCullough. We let them know that a common obstacle for Veterans transitioning from homelessness into permanent housing is purchasing a quality mattress set, which can cost hundreds of dollars. Even when Veterans secure permanent homes with VA support, if the units are largely empty, the isolation of homelessness can remain and undermine housing permanency.

VCS sprang into action. In early 2015, the service purchased 4,000 new queen-size mattress and box spring sets from Serta for distribution to Veterans through VAMCs nationwide. Now in its second year, the program has evolved to include move-in kits, which contain basic supplies that Veterans can use to outfit and clean kitchens, bedrooms and bathrooms.

Elisha Jefferson is one of 50 formerly homeless Veterans in the Columbia, SC area who received a new bed through the program.

To kick off the second year of the program, VHA in November 2015 contacted homeless coordinators at all VAMCs to gauge the local need for beds and home goods and assess their ability to store and deliver the items to Veterans.

For VA homeless program staff at the Dorn VAMC, the request couldn’t have been timelier. The month prior, Columbia suffered flooding that claimed several lives and drove hundreds from their homes. The widespread devastation was a disheartening setback for newly housed Veterans building a life in Columbia.

The Columbia team placed their request and worked with local partner Christ Central of the Midlands to store 50 mattress/box spring sets and 25 move-in kits. The United Way of the Midlands donated 40 bed rails to accompany the mattresses and box springs. The Columbia VAMC’s Health Care for Homeless Veterans team secured donations for 10 more bed rails.

“The Veterans who received these beds were excited and very appreciative,” said Patricia Bradford, the Columbia homeless coordinator, whose caseload included flood-impacted Veterans. “This program was key to their maintaining permanent housing.”

The 2016 Beds for Homeless Veterans program deliveries to VAMCs started in February and ran through May of this year. The VA-partner coordination to prioritize capacity makes sure that the donated materials can be safely stored and quickly distributed to Veterans.

In total, VCS delivered beds and move-in kits to 75 VAMCs. Homeless coordinators at those sites work with Veterans to provide both a bed and a move-in kit or selected items. They also report on how they distribute items, which is information that program officials use to gauge future needs.

Because there is a limited supply of beds and move-in kits, not every VAMC receives the maximum number of units requested. But as was the case in Columbia, other allies often step in to fill the remaining gaps, proving once again the power of partnerships to help end homelessness among Veterans.

Lisa M. Pape, LISW, is the executive director of homeless programs at the Veterans Health Administration. Her primary efforts include implementation and oversight of homeless programs across VA’s health care system. She also leads development of national policy and strategic direction for services for Veterans who are homeless or at risk of homelessness.