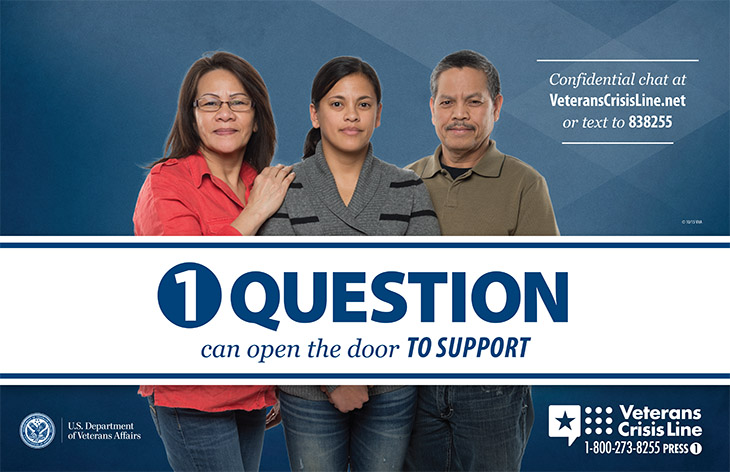 As my unit prepared to redeploy from Iraq in 2004, we were given a somewhat clumsy speech about preventing incidents of family violence against our wives –a briefing that excluded issues related to me and other women Soldiers, since Don’t Ask, Don’t Tell was still in effect.

Once we all got home, little information and relatively few resources were available to help any of us reintegrate. Before long, I felt overwhelmed and hopeless, but was too ashamed of looking weak to admit that I was considering suicide. Luckily, with support from friends, family, and VA, over time I successfully navigated the journey to my new normal.

Unfortunately, many servicemembers, Veterans, their families, survivors and other civilians struggle to cope effectively with life’s challenges, as I did. But some of them do not find a clear path to recovery.

The national tragedy of suicide is a public health issue and the Department of Veterans Affairs has an obligation – and an opportunity – to lead the way in combating it as the largest integrated healthcare system in the country.

Here at VA, we have devoted unprecedented resources to this issue, including an ongoing expansion of the Veterans Crisis Line, which is available to those in need by phone, chat, or text. In addition, every VA Medical Center has a specially-trained Suicide Prevention Coordinator or team. We have also taken steps to ensure women Veterans are recognized and served based on their unique needs as women, not as just “another customer.” We are prominently featured in Make the Connection, VA’s peer-to-peer platform, and VA has free services to help Veterans recover from Military Sexual Trauma (which a higher percent of women have experienced).

We recognize, however, that more can be learned and done: women Veterans have been found to be at higher risk for suicide than women non-Veterans. That’s why VA supported the Female Veteran Suicide Prevention Act, while noting that we require additional appropriations to implement it as written. The bill, which was signed into law by President Obama June 30, requires the department to identify which VA mental health care and suicide prevention programs are most effective for women Veterans and those having the highest satisfaction rates among women Veterans. What works and how women veterans feel about it is the path to greater understanding and impact.

We welcome these mandates.

Establishing which mental health programs are most effective for women Veterans will go a long way in ensuring they are receiving the best care possible, tailored to their unique needs, and will help inform the national dialogue on what works to prevent suicide. VA recognizes that gender-related issues can be important components of care, and the Female Veteran Suicide Prevention Act gives us more tools to analyze the data so we will be able to focus our resources on the most effective treatments that bring the greatest satisfaction to women Veterans and save lives.

Kayla Williams is the director of the Center for Women Veterans at VA Central Office, in Washington, D.C. The center monitors VA’s administration of benefits and services for women Veterans and promotes recognition of contributions made by women who served in the armed forces.