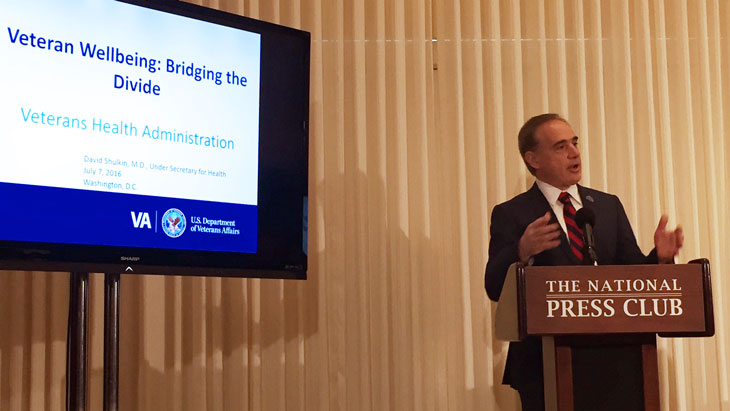 VA has undertaken the most comprehensive analysis of Veteran suicide rates in the U.S., examining over 55 million Veteran records from 1979 to 2014 from every state in the nation. The effort extends VA’s knowledge from the previous report issued in 2010, which examined three million Veteran records from 20 states were available.  Based on the data from 2010, VA estimated the number of Veteran deaths by suicide averaged 22 per day.  The current analysis indicates that in 2014, an average of 20 Veterans a day died from suicide.

“One Veteran suicide is one too many, and this collaborative effort provides both updated and comprehensive data that allows us to make better informed decisions on how to prevent this national tragedy,” said VA Under Secretary for Health, Dr. David J. Shulkin. “We as a nation must focus on bringing the number of Veteran suicides to zero.”

The final report will be publicly released later this month.  Key findings of the analysis will include:

VA is aggressively undertaking a number of new measures to prevent suicide, including:

Using predictive modeling to determine which Veterans may be at highest risk of suicide, providers can intervene early. Veterans in the top 0.1 percent of risk, who have a 43-fold increased risk of death from suicide within a month, can be identified before clinical signs of suicide are evident in order to save lives before a crisis occurs.

Many of these efforts were catalyzed by VA’s February 2016 Preventing Veteran Suicide—A Call to Action summit, which focused on improving mental health care access for Veterans across the nation and increasing resources for the VA Suicide Prevention Program.

Suicide is an issue that affects all Americans.  Recent Centers for Disease Control and Prevention (CDC) data reported in April 2016  that from 1999 through 2014 (the most recent year with data available from CDC), suicide rates increased 24 percent in the general population for both males and females.

VA has implemented comprehensive, broad ranging suicide prevention initiatives, including a toll-free Veterans Crisis Line, placement of suicide prevention coordinators at all VA Medical Centers and large outpatient facilities, and improvements in case management and tracking.  Immediate help is available at www.VeteransCrisisLine.net or by calling the Crisis Line at 1-800-273-8255 (press 1) or texting 838255.