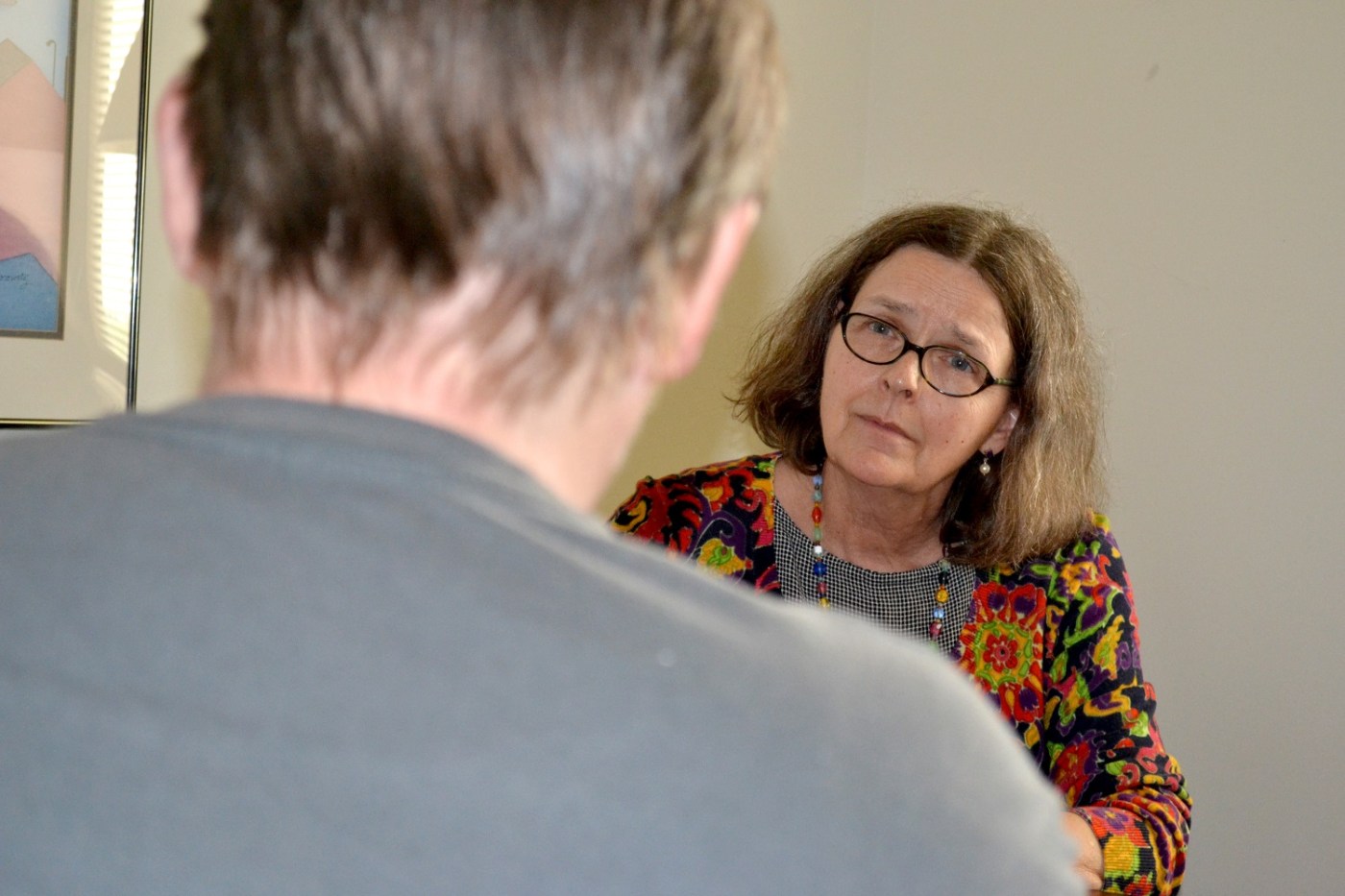 At the Boston VA they’re trying something a little different to help women Veterans suffering from both post traumatic stress and addiction. It’s called togetherness. Lots of it.

“We provide a place for them to come and be with other women who have been through similar experiences,” said Dr. Sharon Baker, a clinical psychologist who oversees the Women’s Integrated Treatment and Recovery Program at the Boston VA’s Brockton Campus. “They’re together all day.

“We have a full kitchen here, so they can all make their meals in there if they want to. They cook together, they eat together.  These women are basically living together for 10 weeks.

“It’s the power of the group,” she added, “and it’s the core of our program. The whole point of group therapy is to feel connected to others, to feel respected, to not feel like you’re being judged.”

Dr. Baker is pictured above with a member of the women’s sisterhood.

“Many of these patients have never had the opportunity to be in a program with just women,” the psychologist noted. “It’s a tremendous advantage, because the things they need to talk about are things they don’t feel comfortable talking about in a mixed group. As far as I know, our program is unique within the VA because of its equal emphasis on substance abuse and trauma in women.”

So how is this new approach to healing and recovery panning out?  What really happens when you put seven or eight women together for 10 weeks?

“This is the first all-female program I’ve been to, so I didn’t know what to expect,” said Rachelle, a 31-year-old former Marine. “I thought there might be some cattiness.  But there’s been nothing but love.  It was sort of a surprise…

“Honestly, some of the best therapy I’ve had here is just talking with the other girls.  I’m an introvert, so I’ve always had trouble letting other people in.  But I’m comfortable with it now; I feel like I’ve been able to open up because we’re all sisters here.   It’s kind of crazy; we’ve only known one another for six weeks but it feels like these women have been my friends for years.

“I’m in a good place right now,” she added. “I finally feel like there’s hope.  I haven’t felt like that in a long time.”

Dr. Baker noted that good chemistry in the group makes a huge difference.  “This group is particularly connected,” she said. “It doesn’t always happen like that, but when it does it’s magic.”

One of Baker’s patients who is definitely feeling the magic is 51-year-old Ingra, a Navy Veteran.

“I’ve felt connection before in my life, but not like this,” she said.  “This is a whole different level.  I used to isolate a lot; I didn’t want to go anywhere.  I had no desire to do anything.  But now I’m with people who understand where I am.  All these women are my friends now. We carry each other.  When someone doesn’t have strength to carry on, we carry her until she’s strong again.”

Ingra said if someone happens to be missing from the group for too long, a rescue mission is organized in fairly short order.

“If one of us isn’t feeling well, if they’re off somewhere by themselves, it’s like a piece of you is missing,” she said. “So we go find that person and try to find out what’s wrong.  We can’t let her just be by herself.”

Another Navy Veteran, 58-year-old JoAnn, described the sisterhood as a powerful force in her road to recovery.

“I was always kind of a loner, so this program has really opened my eyes,” she continued. “Everyone is here to help you stay clean and sober.  I had to wait 58 years to get here, but I’ve never felt better in my life.”

Dr. Baker said fear of relationships and a tendency to isolate are hallmarks of long-term, chronic PTSD.

“A number of these women weren’t even able to leave their house before they came here,” she said. “Some of them couldn’t even leave their bedroom.  But here it’s different.  It’s hard to isolate when you’re living with six or seven other women who care about you.”

“We don’t turn these women into extraordinary women. They already are extraordinary. We just try to help them see that.”  – Dr. Sharon Baker

The psychologist noted that 80 percent of the women who enter her program are victims of military sexual trauma, also known as MST.

“The rest have combat trauma, and some have both,” she said. “But we accept women with any type of trauma, even if it occurred in childhood.  Trauma is trauma.”

She added: “The problem for a lot of the women we see here is they couldn’t tell anyone about their MST. They were afraid to tell anyone, or they did try to tell someone and no one would listen.  But we listen.”

But can years of post-traumatic stress and addiction be vanquished in just 10 weeks?

“Our job is to help them settle down so they can build a foundation of skills that will help them manage their lives once they leave here,” Baker observed. “But it’s a challenge.  Having these two problems, PTSD combined with substance abuse, is really hard.  That’s why we strongly encourage them to continue their involvement with the VA once they leave our treatment program.  We don’t want them returning to their old ways, because if they do their prognosis isn’t good.”

Mastering your emotions and saying goodbye to negative thinking are important ingredients in the recovery recipe, Baker said.  But they are not the only ingredients.

“In addition to working on their coping skills and their relationships with others, we’re also trying to help these women develop self-compassion,” she said. “That’s one of the first things I ask them when they arrive here:  ‘How many of you feel compassion toward yourselves?’  Almost none of them do.  They can feel compassion for a stranger who is suffering.  But they’re unable to feel compassion for themselves, even though they’re suffering terribly.”

Another of Baker’s patients, Karen, agreed that self-compassion is something she’s not too familiar with.

“I’ve had a hard time with that,” admitted the 53-year-old Army Veteran.  “I’ve been numb for so many years that I’m still trying to figure out what my emotions are.  Sometimes I feel like a little kid.   But everyone is very supportive. Everyone is helping me. I feel comfortable here, and safe.”

Visit the VA’s Center for Women Veterans website to learn more about health care and other resources available to women Veterans.

Coping with the aftereffects of MST?  Visit www.womenshealth.va.gov/WOMENSHEALTH/trauma.asp to learn how the VA can help.