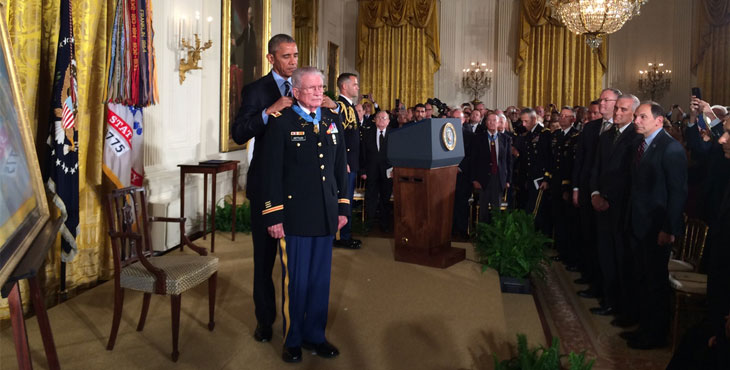 “This seems like a hell of a fuss over something that happened 50 years ago,” Army Veteran Charles Kettles told the president before today’s White House event.

That “fuss” he’s referring to is being awarded of the Medal of Honor.

Kettles originally received a Distinguished Service Medal for his courageous actions on May 15, 1967, but today he was awarded the Medal of Honor, joining a small but distinguished group of recipients.

On 15 May, 1967, Major Kettles, upon learning that an airborne infantry unit had suffered casualties during an intense firefight with the enemy, immediately volunteered to lead a flight of six UH-1 Delta helicopters to carry reinforcements to the embattled force and to evacuate wounded personnel.  Enemy small arms, automatic weapons, and mortar fire raked the landing zone, inflicting heavy damage to the helicopters.  However, Major Kettles refused to depart until all helicopters were loaded to capacity.

He then returned to the battlefield with full knowledge of the intense enemy fire awaiting his arrival, to bring more reinforcements, landing in the midst of enemy mortar and automatic weapons fire that seriously wounded his gunner and severely damaged his aircraft.  Upon departing, Major Kettles was advised by another helicopter crew that he had fuel streaming out of his aircraft.  Despite the risk posed by the leaking fuel, he nursed the damaged aircraft back to base.

Later that day, the Infantry Battalion Commander requested immediate emergency extraction of the remaining 40 troops, including four members of Major Kettles’ unit who were stranded when their helicopter was destroyed by enemy fire.  With only one flyable UH-1 helicopter remaining, Major Kettles volunteered to return to the deadly landing zone for a third time, leading a flight of six evacuation helicopters, five of which were from the 161st Aviation Company.

During the extraction, Major Kettles was informed by the last helicopter that all personnel were onboard, and departed the landing zone accordingly.  Army gunships, supporting the evacuation, also departed the areas.  Once airborne, Major Kettles was advised that eight troops has been unable to reach the evacuation helicopters due to the intense enemy fire.  With complete disregard for his own safety, Major Kettles passed the lead to another helicopter and returned to the landing zone to rescue the remaining troops.  Without gunship, artillery, or tactical air support, the enemy concentrated all firepower on his lone aircraft, which was immediately damaged by a mortar round that shattered both front windshields and the chin bubble, and was further raked by small arms and machine gun fire.

Despite the intense enemy fire, Major Kettles maintained control of the aircraft and situation, allowing for the remaining eight soldiers to board the aircraft.  In spite of the severe damage to his helicopter, Major Kettles once more skillfully guided his heavily damaged aircraft to safety.  Without his courageous actions and the superior flying skills, the last group of soldier and his crew would never have made it off the battle field.

Major Kettles’ selfless act of repeated valor and determination are in keeping with the highest traditions of military service and reflect great credit upon himself and the United States Army.

Kettle’s heroic actions are reflective of his character and dedication to his fellow soldier. His heroism is also joined by selfless humility. “I didn’t do it by myself,” Kettles said in an interview with Army officials. “I’m just leading the pack, making the decisions. Those behind me were obliged to follow. And they did. They did their job above and beyond. So, the medal is not mine, it’s theirs.”