An injury led to homelessness, but various VA programs created a path to stability 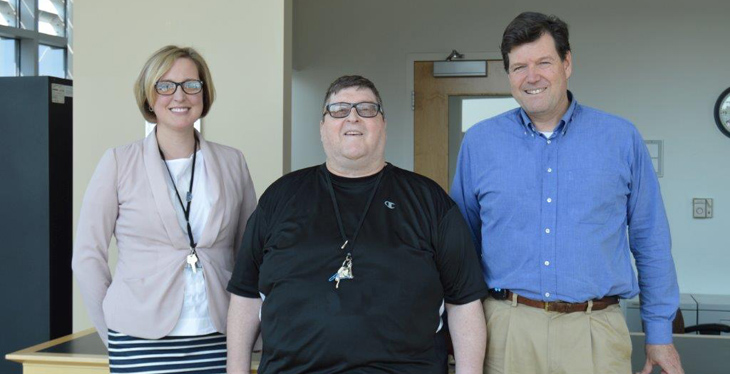 Stephen Iadeluca was discharged from the U.S. Air Force in 1979. He received formal training as an electrician while he was in the service and continued to work in the field for more than three decades. He made his living wiring lights and appliances, upgrading electrical panels and doing other jobs for residents and businesses around his hometown of West Warwick, Rhode Island, about 15 miles south of Providence.

In 2009, Iadeluca’s was injured on the job. He left the site in an ambulance and was hospitalized. He was unable to work during his recovery.  He faced mounting medical bills, uneven workers’ compensation payments and attorneys’ fees.

“I was homeless, unemployed, broke and injured,” he said. “I remained without a permanent home for the better part of two years.”

Iadeluca turned to the Providence VA Medical Center (PVAMC) for help. He was first referred to Providence’s Gateway to Independence, a transitional housing facility for Veterans funded with VA Grant and Per Diem dollars. That put a roof over his head until he could secure permanent housing.

“Almost right away, a VA outreach worker came by the facility and started signing me up for different VA programs,” Iadeluca said. “There were so many services to help me turn my life around. They did everything for me.”

The outreach worker assigned me to serve as Iadeluca’s primary care doctor, which I felt was a good fit. More than 10 years ago, I founded VA’s first integrated care program for homeless Veterans on our Providence campus. The Homeless Patient Aligned Care Team (H-PACT) model is now practiced at 62 VA medical facilities around the country. It would not be the last time Iadeluca and I would cross paths as he got back on his feet.

To regain job experience, he received a VA position pushing wheelchairs, for which he earned a stipend. At the same time, he enrolled in VA Vocational Rehabilitation and Employment services, a program that counsels Veterans looking to advance their skills or get trained for a new job.

“Weighing my options, I decided to pursue a career in education,” Iadeluca said.

Iadeluca’s decision led to our becoming connected again: He landed a grant-funded position supporting my research into homelessness.

“I recruited survey subjects for a study on levels of services needed to keep Veterans from reverting to homelessness,” he said. “I had some experience in that.”

By May 15, 2013, Iadeluca was moving into a nearby apartment that accepted his HUD-VASH voucher, which his VA caseworkers helped him furnish. Operation Stand Down, a Rhode Island-based Veterans’ housing and service provider, paid Iadeluca’s security deposit.

He continued to look for a steady position, eventually landing a permanent, part-time position in the Providence VA’s Department of Education and Nursing Administration.

“It all just happened so fast,” he said. “I thought I would continue in the wheelchair job until I could save up for an apartment and find a permanent position, but everything just worked out even better.”

Now Iadeluca works each weekday morning from 8 a.m. to noon. He logs longer hours during new-employee orientation sessions, which he helps moderate from the VA auditorium stage. He also lends time to PVAMC’s Voluntary Service office, usually in the hospital library.

In his off hours, he performs the routines of a now-steadied life—paying bills, shopping for groceries, doing laundry.

Iadeluca’s goal is to obtain a full-time position so he can afford his rent unassisted, freeing up his HUD-VASH slot for another Veteran in need.

“My life is very rewarding—it is a great life,” he said. “And I know of so many other Veterans VA has helped. VA often gets a bad rap, but it gave me hope and a second chance and I’m grateful.”

Dr. Thomas O’Toole is a primary care physician at PVAMC who for more than a decade has pioneered innovative services for homeless Veterans. He splits his time between Providence and Washington, D.C., where he currently also serves as director of VA’s National Center on Homelessness among Veterans.