McDonald to DAV convention: “Excellence is what we’re after” 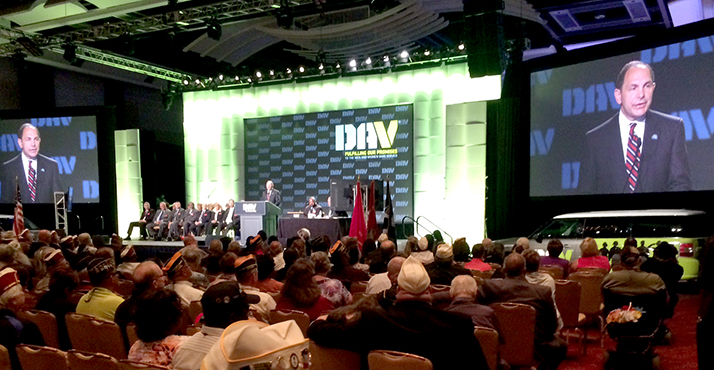 “There’s no more noble mission—making a lasting, positive difference in the lives of my fellow Veterans,” Bob McDonald told attendees of the 2016 DAV National Convention was his motivation in taking on the position of VA secretary. McDonald spoke to the Atlanta convention Sunday on his work at VA since becoming secretary and the important role Veterans service organizations such as DAV have played.

“I need to hear what you have to say. I want to use your ideas in transforming VA. I need to know how VA looks from your perspective,” McDonald said.

Two years ago in Las Vegas, McDonald delivered his first address as secretary to the DAV National Convention. At the time, he told them that “Coming face-to-face with the reality some Veterans have endured isn’t a disaster. It’s a great opportunity, and it’s a rare opportunity we cannot miss, nor underestimate.”

“You should know that last year Veterans had nearly 5 million more appointments than the previous year,” McDonald said. “Almost 57 million were in VA facilities, over 21 million were VA care in community.”

Beyond the numbers, McDonald also highlighted the work of VA employees across the country. He told the story of Atlanta social workers Patrice Green and Marissa Jones who helped a Veteran not only exit homelessness, but reunited him with family he hadn’t seen and had lost track of for 22 years.

“Excellence is what we’re after,” McDonald told the crowd. “So the right dialogue is about forward-looking leadership and sustainable accountability.”

The DAV National Convention continues through August 3. President Obama is scheduled to address the convention on Monday, August 1.