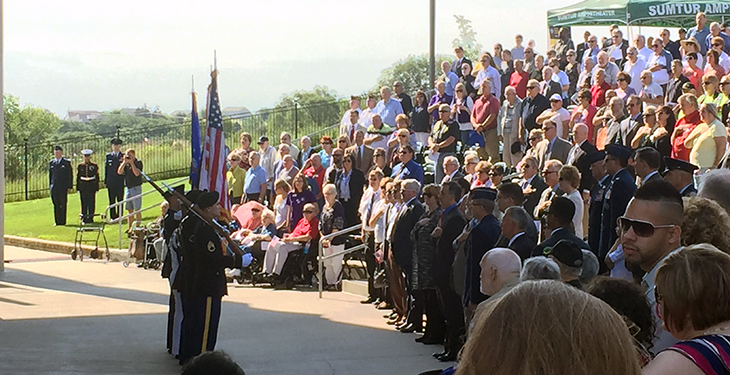 “In Omaha, we dedicate a new place in their honor: a place that reflects our gratitude, our love, and our devotion…” said VA Secretary Bob McDonald. “…a place where successive generations of Veterans—separated by time—are reunited in veneration.”

Sec. Bob McDonald and Rep. Jeff Miller at the dedication of the Omaha National Cemetery.

The new 236-acre cemetery will serve the burial needs of more than 112,000 Veterans in the cemetery’s service area.

The VA purchased the land for the cemetery in December 2012 for $6 million. The property is located along South 144th St. (Highway 50), at 14250 Schram Road in Sarpy County. The cemetery will serve Veterans, spouses, and eligible family members in eastern Nebraska and western Iowa not currently served with an open national, state or tribal Veterans cemetery within 75 miles of their residence. The closest national cemetery is Leavenworth National Cemetery located in Leavenworth, Kansas, approximately 180 miles away.

VA awarded the architect and engineering contract to Vireo Planning & Design of Omaha, and the construction contract to Archer Western Construction. Plans for the initial phase of the cemetery will develop approximately 35 acres of land that will include pre-placed crypts, columbarium niches, in-ground niches, a scattering garden, administration building and other supporting infrastructure elements.  The cemetery’s first phase will provide for approximately 10 years of burials.

Burial in a VA national cemetery is open to all members of the armed forces and Veterans who have met minimum active duty service requirements and were discharged under conditions other than dishonorable. Members of the reserve components of the armed forces who die while on active duty, while on training duty, or were eligible for retired pay, or were called to active duty and served the full term of service, may also be eligible for burial.

Their spouse, widow or widower, minor children and, under certain conditions, unmarried adult children with disabilities, may also be eligible for burial. Eligible spouses and children may be buried even if they predecease the Veteran.

The Omaha National Cemetery was dedication on August 5.

VA provides the gravesite, grave liner, opening and closing of the grave, government headstone or marker, U.S. burial flag, Presidential Memorial Certificate and perpetual care of the gravesite at no cost to the family.

VA operates 135 national cemeteries and 33 soldiers’ lots and monument sites in 40 states and Puerto Rico. More than four million Americans, including Veterans of every war and conflict, are buried in VA’s national cemeteries.  VA also provides funding to establish, expand, improve, and maintain 100 Veterans cemeteries in 47 states and territories including tribal trust lands, Guam, and Saipan.  For Veterans not buried in a VA national cemetery, VA provides headstones, markers or medallions to commemorate their service.  In 2015, VA honored more than 353,000 Veterans and their loved ones with memorial benefits in national, state, tribal and private cemeteries.

Information on VA burial benefits is available from local VA national cemetery offices, from the Internet at www.cem.va.gov, or by calling VA regional offices toll-free at 800-827-1000. To make burial arrangements at any open VA national cemetery at the time of need, call the National Cemetery Scheduling Office at 800-535-1117.

About the author:  This article was submitted by the National Cemetery Administration.