Home / Honoring Vets / Missouri Veteran advocates for others, proving one person can make a difference

Missouri Veteran advocates for others, proving one person can make a difference 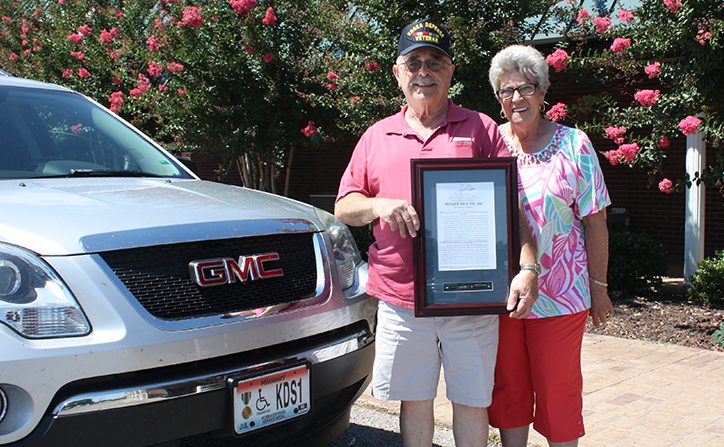 The following is based on the original article located on the John J. Pershing VA Medical Center’s website.

Not long ago, Gerald Rogers went to his local Missouri license office, and asked for a “Korean Defense Service Medal” license plate for his vehicle.  He was surprised to learn the plates were not available, but shocked that they weren’t even being made.  Rogers asked what it would take to get one produced.  He was told “an act of Congress,” at least one at the Missouri state level.

Galvanized into action, Rogers began contacting both his state and federal representatives, the Missouri governor… anyone who might be able to help with his cause.

“Of all the people I emailed, only John McCaherty even knew what I was talking about,” said Rogers who served in Korea in 1962, not long after the official end of the War.

Interestingly, McCaherty is from District 90, which was not where Rogers lives, but that didn’t stop the state representative from helping him and advocating for a license plate to acknowledge Veterans who earned the Korean Defense Service Medal.

McCaherty was able to get a bill through the state house of representatives three times, but it failed in the state’s senate due to unrelated amendments.  Finally, on the fourth try and with help of state Sen. Will Kraus’ support the bill passed, and Governor Jay Nixon signed it into law.

Rogers, originally from Morehouse, Missouri, enlisted in the Army in 1961, five days after turning 17.  After completing basic training at Ft. Chaffee, Arkansas, Rogers intended to become an airborne ranger, but suffered a landing accident in Ft. Benning that changed his plans. Headed for Germany, Rogers was redirected at the last moment when his orders changed to Korea.

“Things hadn’t changed much since the formal end of hostilities,” Rogers says.  “I asked a soldier there what was different, and he told me the main road was blacktopped, but that was about all.  People were still shooting at us.”

Rogers was stationed about five miles from the DMZ, the demilitarized zone just south of the 38th parallel.  He was selected to serve on a team that operated a 106mm recoilless rifle mounted to a Jeep.  Not long after being assigned to this duty, Rogers and his crew pulled their Jeep between two American tanks about 100′ apart, overlooking a valley below.  When one of the tanks fired, the whole crew was severely impacted by the noise.  Rogers lost much of his hearing.

“One of our crew member’s ears actually bled,” he recalled. “Nobody wore hearing protection in those days.”

“I have high regard for VA,” he says.  “I can’t say enough about the people and the VA system; they have really helped me.”

Rogers advocates for his fellow Veterans, encouraging them to enroll and receive the medical and mental health services they need.  “Back in my day, nobody talked about PTSD,” he says.  “You couldn’t, or you’d be labeled, and then you were through.  But now times have changed; something like PTSD is better understood and we want to support Veterans with PTSD.  I often tell people they need to get help, and VA can provide it.”

About the authors: Angela Smith, the public affairs officer and congressional liaison at the John J. Pershing VA Medical Center in Missouri, contributed this article to VAntage Point.