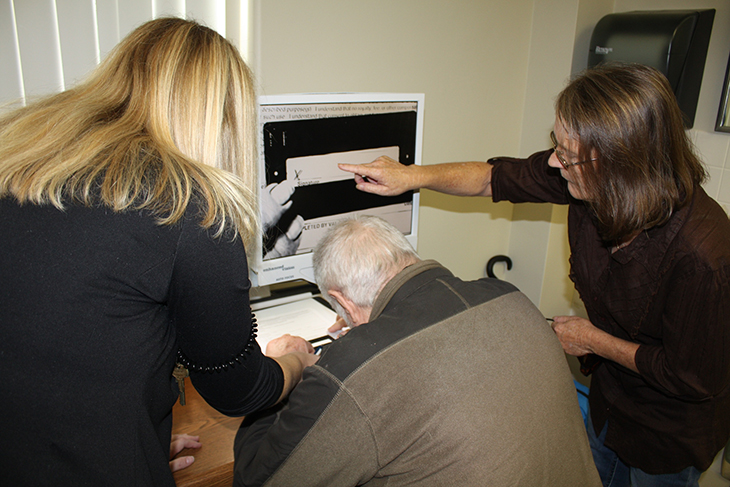 The following story is from the John J. Pershing VA Medical Center. The full story is available here.

Sgt. 1st. Class Kenneth James Cline is a bona fide hero, the kind people wave American flags for and parents point out to their children during parades.

Cline served as a combat engineer and a demolition specialist during his years of service in the Army from 1957-1978.  He was awarded the Bronze Star Medal and Army Commendation Medal with a “V” for his valorous acts during ground combat operations in Vietnam.  While assigned as the non-commissioned officer in charge of mine-sweeping operations, he conducted a night sweep operation to clear the roadway for allied troops “under constant threat of enemy attack” in an area which had not been occupied for many months.  His courage and leadership helped provide for the safety of his fellow soldiers.

But these days, Cline can’t see the flags or the children in parades. In 2004, he was declared legally blind, and also suffered a couple of strokes that impacted his health so much that he engaged in a two-year battle just learning to walk and talk again.  It was a struggle merely relearning to feed himself, though his wife, Janet, was there by his side the whole time.

The decrease in his quality of life began to impact his outlook and depression soon set in.  Even the tiniest details of daily living could be overwhelming.

“Erin helped with sticky dots to put on things, so I could tell the difference between say: ice and water on the fridge,” Mr. Cline says.  “She gave me something to put on my plate to keep food from sliding off and a gadget to tell me when my coffee cup was filling up, so I’d know when to stop.”

It’s the little things, Cline says, citing an example of shirts with no tags.  “You can’t tell front from back when you’re getting dressed.”  Hullinger helped with some puff paint on the inside back, so Cline could feel the difference.  She also provided a talking watch, so he would not have to depend on others to tell him the time.

“They spent hours with me, testing my vision. They found out my right eye is stronger than my left, which was the opposite of what I had thought.”

The clinicians provided Cline with six pairs of glasses, designed for different tasks.  “It was great,” he says, “I never imagined yellow glasses would help so much.”

Cline hugs VA Social Worker Erin Hullinger for her efforts in helping him regain his quality of life.

And then came, “The Viewer.” A close-circuit television device magnifies objects and papers for Cline to be able to see or read them.  The video magnifier uses a stand-mounted or handheld video camera to project a magnified image onto a video monitor, a television screen or a computer monitor.

The device has made a big difference for Mr. Cline. “It makes everything so much clearer,” he says. “The best part is I can see pictures of my grandkids and great-grandkids for the first time.”

About the author: Angela Smith is a public affairs officer and congressional liaison for the John J. Pershing VA Medical Center in Poplar Bluff, Missouri.  She has over 25 years of experience in the public information field, including serving as an incident information officer on several large wildfire events while working with the National Park Service.   She resides in Williamsville, Missouri, with her Air Force Veteran husband, where she serves as mayor and is currently working on her Master’s in Public Administration.