ParaArchery Team USA has roots in the Veteran community 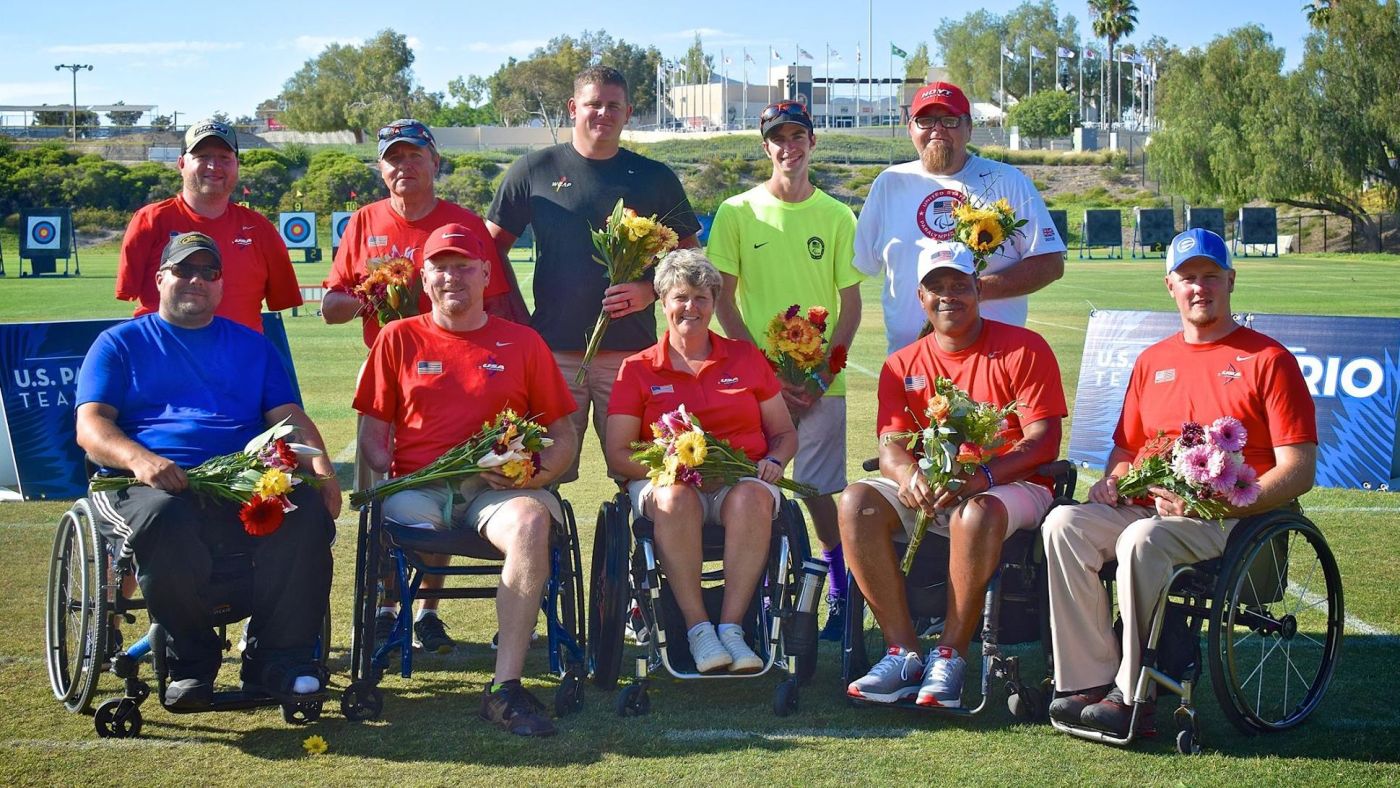 There are three Veterans and one active duty Servicemember on the USA Archery Team for 2016 Paralympics underway in Rio. Archery competitions begin Saturday, Sept. 10.

For this year’s team, its members and coaches have roots in the Veteran community that run deep.

Randi Smith, the head coach for the team, got her start as a recreation therapist with Easter Seals.

“I discovered that archery is a great sport for people with disabilities because it’s so inclusive. People of all ages and all abilities can do it,” said Smith.

Smith’s husband is a quadriplegic. When he also became interested in archery, the two of them opened an archery shop. They discovered there was a world of opportunities out there for people with disabilities who are interested in the sport. They began traveling to events and meeting people. Then Smith received an offer to become the team leader for the Paralympic archery team headed to the 2004 Paralympics in Athens.

“I’m fortunate to work with a fascinating group of people who had been very functional and doing great things and all of the sudden they’re injured and they think their life is over. Archery just seemed to change that. They could do archery, be competitive and they could still represent their country,” said Smith.

Smith said VA’s adaptive sports programs get Veterans away from clinical settings and out into real-life settings where they’re able to connect with people who have disabilities, who show them what can be done.

“People figure out that life isn’t over, maybe what they do has to change but who they are is still the same,” said Smith.

The support Veterans receive at adaptive sport events is contagious.

Smith said several Veterans who’ve participated in the Summer Sports Clinic — which is taking place starting Sept. 18 in San Diego — have gone on to participate in archery with their families, and that work goes beyond what the team is accomplishing by getting to the Paralympics. It brings families back together with an activity they can share.

As the team heads into competition in Rio this weekend, Smith said “I want everybody to go, shoot their best, and feel like they did their best.”

According to USA Archery, Shelby was emotional on making his first Paralympic team: “I don’t actually have a lot of words for how it feels right now because I’ve been working on it so hard and for so long. I’ve really come a long way and my wife has sacrificed a lot for me to do this, I can’t describe the feeling. It’s unreal really.”

“The trials process started out kind of rough,” commented Shelby on his climb this event from fifth place to second. “The second trials really put me way down there, so I came here with the mindset that I’m going to shoot, have fun and let it fall – and it all came together.”

Michael Lukow of Salt Lake City is an Army solider. He began shooting archery in 2008, shortly after losing his left foot to an explosive while serving in Iraq. He now has a prosthetic foot and shoots in a standing position. Lukow earned a spot in the Army’s World Class Athlete Program.

Lukow won an individual bronze at the 2016 Arizona Cup, gold at the 2016 Parapan Am Championships, and silver at the 2014 Pan American Championships. He finished second in the recurve division of the Paralympic Trials.

Jeff Fabry is a Paralympic gold medalist and member of the team. His journey to the Paralympics began when he was 25 years old. He is now 43. For the last 12 years, he’s worked closely with Veterans, many of whom are now his teammates.

When Fabry was eight years old, he heard a story on a talk radio show about a man in England who shot a bow using his teeth. The story stayed in the back of his mind. Fabry lost his right arm above the elbow and right leg above the knee in a motorcycle accident when he was 15. Almost a decade later, he remembered the story he’d heard and decided to craft something. He cut up an old pair of blue jeans to make a mouth tab he could use, and shot his first arrow.

Fabry’s passion for hunting and desire to get back into the woods motivated him to try archery. He didn’t know if would lead him to competition. He began participating in tournaments where he was shooting with able body shooters and winning. Then he met Aaron Cross, a three time Paralympian, who urged him to try out for the team.

In 2003 Fabry went to his first international tournament in Madrid. He walked out as the world champion. Since then he’s won a few more championships, including a gold medal in London and two bronze medals in the Beijing and Athens Paralympic games.

“What I’ve learned the most is how to instruct other people with disabilities. Giving back for our Vets is what pushes me the most,” said Fabry.

“I’ve been working with Vets for 12 years and every time I’m with that group it’s a lot of fun,” said Fabry, referring to his Veteran teammates.

Fabry coaches between 50-60 archers five days a week as the archery director for Break the Barriers, a nonprofit organization in Fresno, California. Break the Barriers offers free archery training for disabled Veterans. He also collaborates with the VA medical center in Fresno to help gets Veterans in the door.

“It’s an honor to be a part of this team. My teammates are some of the best shooters in the United States. We’re really a family, not a team,” said Fabry.

“We get behind each other. If someone has a bad day, we’re right there to pick them up and get them ready for the next day.”

Tucker was introduced to archery in 2014 when her now fellow teammate, Jeff Fabry, came in to the prosthetics office where she worked and asked if she’d ever tried archery. He then offered to go out to his car and get his bow for her to try.

Just seven months after that, she moved to Colorado Springs to train.

Tucker competed in the 2015 Vegas Shoot. Between then and now, she’s competed in the Arizona Cup, SoCal Showdown, the Parapan Am Games and the World Archery Para Championships.

“Losing my arm was a blessing way beyond the sport itself. Just believe and try your best at whatever you do,” Tucker told TeamUSA.org.

Lisa Coryell is an Army Veteran, and the first woman W1 archer to compete in the Paralympics this summer in Rio.