Team Rubicon: Disaster response and a commitment to mental health 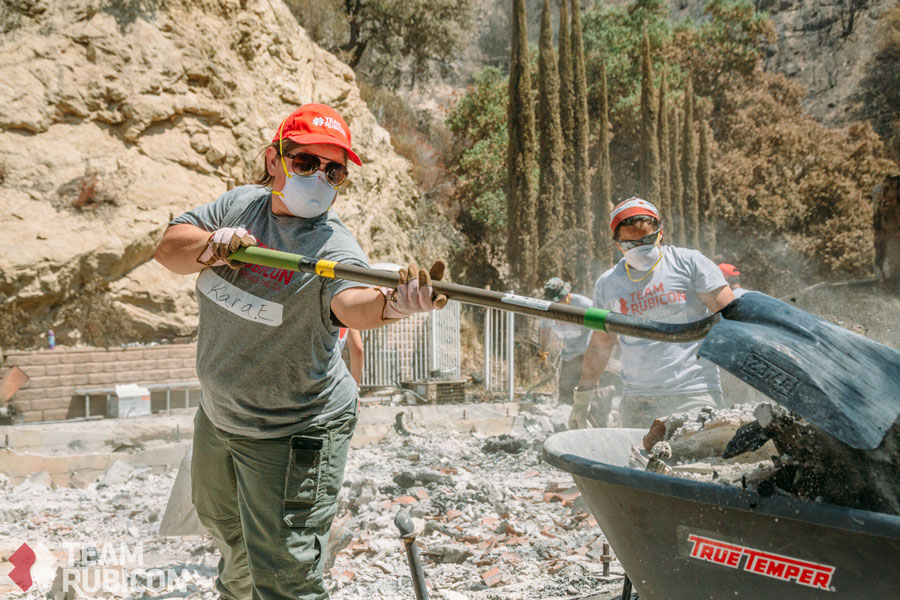 Take a step out of your worn-out boots. Look around. The surrounding world is a new place after your military service, a daunting sight, an opportune time for self discovery, but a difficult road for many. Now imagine for a second, a new route that provides a familiar, gritty atmosphere and mission. Picture damaged and destroyed homes, towns half underwater, blackened landscapes burnt by fires, and then picture community residents who need help. This image isn’t a battlefield, it’s the aftermath of a natural disaster. So what happens next? Team Rubicon responds with a crew of dedicated members comprised of mostly military Veterans, accustomed to dirty assignments in any environment. Today, if you were to travel to Baton Rouge, Louisiana, you’d find Team Rubicon clearing muck from basements and helping residents rebuild on a mission dubbed Operation Geaux Big.

Nicole Morales’ story gives us sense of the experience in Louisiana.

Team Rubicon is a Veteran-led disaster response organization uniting the valuable skills and experiences military Veterans possess to provide relief when disasters strike. Its dual mission of disaster response and Veteran reintegration is altering the framework and current paradigm set by other aid groups. Our volunteer members are 75 percent military Veterans and 25 percent kick-ass civilians.

Since Team Rubicon’s inception in 2010 when an eight-man team of Veterans and medical professionals responded to the earthquake in Haiti, the nonprofit organization has conducted 148 operations around the world, 31 in 2016 alone. This includes Operation Geaux Big in Baton Rouge, Louisiana, where 113 members have deployed to aid in ongoing flood relief efforts. Team Rubicon also launched Operation Hermes this spring, where medically trained responders are providing primary care to refugees displaced by conflict in the Middle East.

To serve as a member of Team Rubicon’s growing volunteer base of 40,000 doesn’t require one to take off multiple days off work or travel long distances from loved ones to deploy to areas devastated by hurricanes, wildfires, earthquakes and other disasters. The organization brings members together through local training opportunities, service projects, social events, and, recently, through Tough Mudder events around the country as it was recently named the official U.S. Charity partner of Tough Mudder.

Team Rubicon reunites Veterans with a sense of purpose, community and identity often lost after walking away from service. This half of the organization’s dual mission was most prominently highlighted when original member Clay Hunt took his own life in 2011. Clay was a Marine Veteran and served in Iraq and Afghanistan with Jake Wood, Team Rubicon’s cofounder and CEO. He met up with Jake in Haiti a few days after the team, which would become Team Rubicon, first arrived. Clay was a strong advocate of Team Rubicon’s mission and one of the first to acknowledge its potential in the battle against post-traumatic stress for returning Veterans. While Team Rubicon set out to respond to disasters abroad, losing Clay emphasized the need for continued service at home, and the organization began to identify communities in the U.S. where assistance was needed, starting with Tuscaloosa, Alabama in the wake of deadly tornado touchdowns.

Clay Hunt with the original team in Haiti 2010

Team Rubicon has continued Clay’s fight by arming its members with multiple resources, including the Clay Hunt Fellows Program (CHFP), a leadership and training program for motivated veteran members who are eager to grow. The CHFP selects candidates with an array of skills and diverse military backgrounds, and each Fellow must show dedication to Clay Hunt’s original belief that finding a purpose after military service was something Team Rubicon naturally provided.

Since 2012, Team Rubicon has offered suicide prevention training known as ASIST (Applied Suicide Intervention Skills Training) to its members, led by instructors within the organization. Upon completion of the two-day ASIST workshop, participants should be willing, ready, and able to provide help to someone considering suicide and feel confident to intervene when someone is showing signs of suicidal behavior. So far, more than 400 members have completed ASIST through Team Rubicon.

Team Rubicon is often referred to an extended family of volunteers devoted to disaster response. By keeping members engaged with regional training opportunities, unique mitigation projects such as Operation Salton Sink in Calipatria, CA, as well as disaster response operations, they’re united together with a common objective. Many of the active Veterans and responders among Team Rubicon’s ranks have expressed its positive impact on their own mental health.

As September is National Suicide Prevention Awareness Month, Team Rubicon is reaching out to those in need of a renewed purpose the same way they reach out to citizens everywhere whose lives have been hit by a disaster. Team Rubicon’s message is the same in both situations: don’t worry, you’re not alone, we got this.

Learn more and join the team at teamrubiconusa.org.

Team Rubicon’s primary mission is providing disaster relief to those affected by natural disasters, be them domestic or international. By pairing the skills and experiences of military veterans with first responders, medical professionals, and technology solutions, aims to provide the greatest service and impact possible. Through continued service, Team Rubicon seeks to provide our veterans with three things they lose after leaving the military: a purpose, gained through disaster relief; community, built by serving with others; and self-worth, from recognizing the impact one individual can make. Coupled with leadership development and other opportunities, Team Rubicon looks to help veterans transition from military to civilian life.