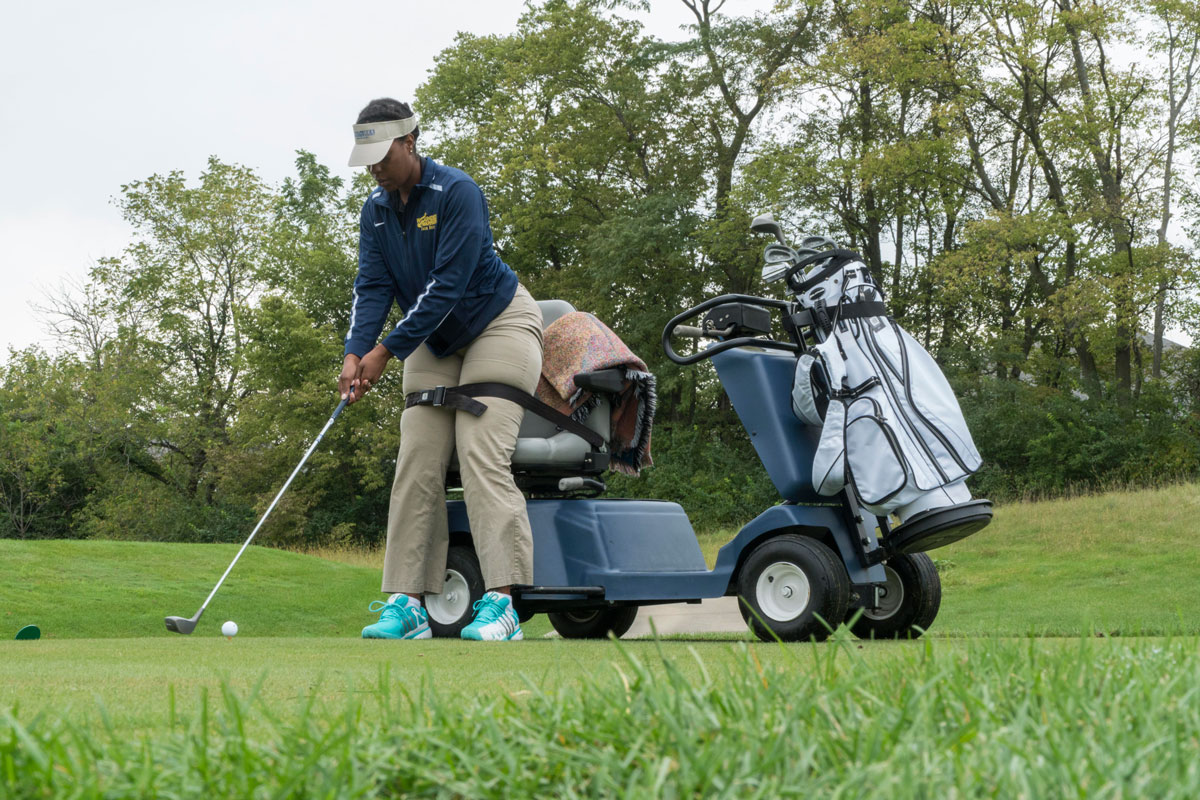 “Don’t be afraid. Keep an open mind and just go for it. You have nothing to lose by trying, you are not the first person and won’t be the last,” urges Navy Veteran Sharona Young.  “It’s normal to be afraid to try something new. Don’t let that keep you from getting out there. Try it. You wont regret it. It will be life changing.”

If you’re a disabled Veteran considering trying an adaptive sport, that’s the advice you’ll get from Young, a 35-year-old disabled Navy Veteran trying golf for the first time this year at the National Veterans Training Exposure Experience (TEE) Tournament.

“Every adaptive event I have been to, the people have been very welcoming, more than helpful, nice,” said Young.

Just three years ago, at the age of 32, Young was diagnosed with multiple sclerosis (MS) and was medically discharged from the Navy after 14.5 years of service.

Young struggled with depression after her diagnosis.

“When I was diagnosed with MS it was devastating. I just felt like…my life is over, what am I supposed to do now? I’m broken. I can’t work like I used to… I can’t do things with my daughter like I used to,” said Young.

She had a Navy counselor who encouraged her to give adaptive sports a try, and recommended she go out for the Warrior Games, an adaptive sports competition for wounded, ill and injured Servicemembers and Veterans. Young said she doesn’t know if she would have ever come out of her depression if she hadn’t listened to that counselor and given adaptive sports a try. At her first event, she met people with a wide range of different disabilities: spinal cord injuries, cancer, ALS, MS, quad amputees.

Young uses a Solorider golf card to stay active and improve her game.

“It was eye opening. I thought, ‘if this girl can be out here winning gold medals and she doesn’t have any legs, I can do something. I still have my legs, they don’t work all the time, but I can still do something,’” said Young.

“Adaptive sports has given me a new outlook on life, new hope,” said Young.

Young said she went through a lot of trials and tribulations as a kid growing up in Minneapolis. From a young age, she thought, “This can’t be all there is to life. I’m going to see what else is out there before I accept that this is it.”

Young had an itch to travel, so she called every recruiter in the phone book. A Navy recruiter was the first to call her back. At that time, she didn’t know anything about the military. She says she didn’t even know the difference between the branches, or what boot camp was. No one in her family had military experience.

Young made a career as a Chief Yeoman. She served on USS Bataan for four years, traveling through the Mediterranean and the Middle East. The Navy took her to Spain, England, France, Germany. She’s visited 34 states in the U.S., as well as Puerto Rico, the Virgin Islands and Canada.

Despite no longer being in the Navy, Young continues to get her travel fix at adaptive sporting events around the country. In 2016, she’s traveled to eight states for various events.

In the last three years, Young has tried archery, cycling and tennis. She participated in VA-sponsored events such as the National Veterans Wheelchair Games, Winter Sports Clinic and the Summer Sports Clinic. She’s headed to Las Vegas next week for a racquetball tournament. This year is her first time participating in the National Veterans TEE Tournament, and her first time playing golf.

She loves bringing her 10-year-old daughter whenever she can. Just last weekend, she took her daughter to a surfing event in Florida, where they currently live.

Young said her daughter recently told her, “When I grow up, I want to play wheelchair tennis, too.” She laughed and said she replied by telling her daughter she could give standard tennis play a try first.

“You have to have an open mind, try something new, learn something new, if you get into that mindset of, ‘I can’t, I cant, I can’t, or poor me,’ then life is going to be much harder for you. This day and age, there is a way. Somebody else is already figuring something out,” said Young.

She said taking her daughter to these events means she could meet other kids she can relate to with people with disabilities in their families. Young also volunteers at her daughter’s school and most days, rides her hand bike alongside her daughter on their ride to school in the morning.

Young’s view on life is a positive one that she willingly shares.

“MS is a very unpredictable disease, and that saying, ‘Treat every day like it’s your last’… that’s the mentality I have now. There is a very good chance that I can wake up one day and not be able to see anymore or be permanently paralyzed, or can’t use my hands. I just don’t know. If that should happen at least I can look back and say, ‘you know what, I tried all these different things and I’m happy I did.’ Instead of laying saying oh well man I wish I would have went and tried that tennis or I wish I would have went to that golf clinic. I can be comfortable and happy knowing I did try. In fact, even if I did wake up tomorrow blind or paralyzed, I know that won’t be the end, I’ll still be able to go out and have fun and do things, instead of sitting waiting to die. Adaptive sports has opened my eyes to possibilities I never would have imagined otherwise had I not listened to my counselor and gotten out and tried something.”

With that, she was back to the course.