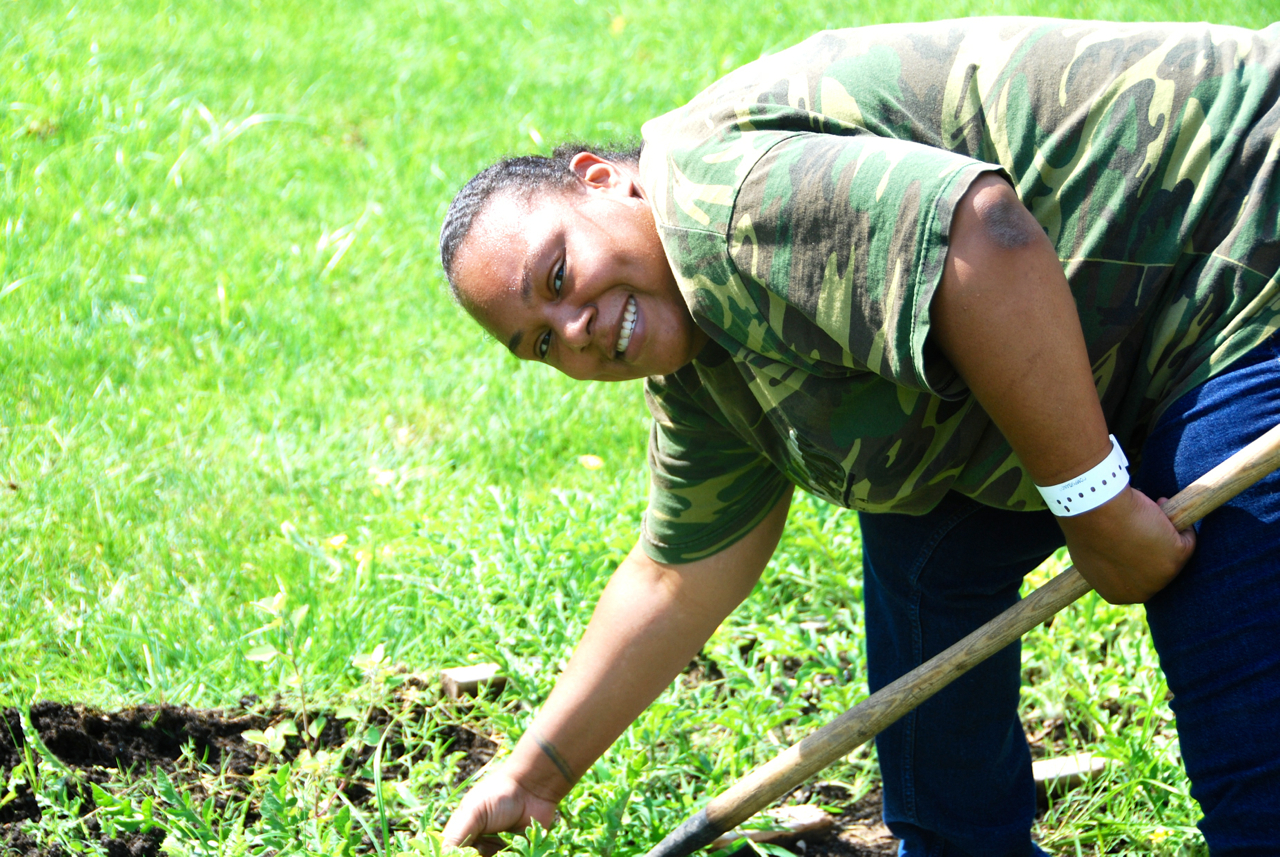 “It was such a pleasure to sink one’s hands into the warm earth, to feel at one’s fingertips the possibilities of the new season.”

The above observation is from The Forgotten Garden, a novel by Kate Morton, and it pretty much sums up the thinking behind a new program launched this year at the Topeka VA.

“Our philosophy is that if you get your hands in the dirt, it’s very healing,” said Peggy Tice, a nurse manager who runs the Stress Disorders Treatment Program at the Colmery-O’Neil VA Medical Center in Topeka.

In the spring of 2016 Tice decided to introduce vegetable gardening as one of the therapeutic activities in her seven-week program for Veterans dealing with post-traumatic stress and other anxiety disorders.

“It kind of takes you back to your roots, pardon the pun,” she said. “If you’re caring for something and nurturing it, it takes the focus off yourself.  Plus, it’s fun.

“Sometimes your garden gets wiped out and you have to start over.”

Lauren, a 27-year-old Army Veteran, agreed that a little sweating in the garden is the perfect way to release tension and anxiety. “I can get my hands in the dirt and work off some of the steam that builds up inside me,” she said.  “Gardening is very therapeutic for me.  You take a seedling, something so small and tiny, and then you end up with something so great.  And it’s not just food for your body.   It’s nourishment for your soul.”

Peggy Tice noted that tending vegetables, believe it or not, is also a good way to build better communication skills. “You have to communicate with the people working alongside you in the garden,” she said.  “You may not be able to tell the difference between a weed and a tomato plant, so you have to ask the person next to you before you pull the wrong thing out of the ground.”

Angela Nealon displays one of the many cucumbers she and her fellow gardeners have nurtured together.

The nurse manager revealed that her vegetable garden almost didn’t happen because of severe storms that hit Kansas earlier in the year.

“We got a late start this year because we had flooding in the spring and our garden got wiped out,” she said. “This is Kansas, after all.  We have weather.   But things like that happen in life.  Sometimes your garden gets wiped out and you have to start over.  It’s a disappointment, but you rebuild and go on.  That’s what we’re trying to teach these patients.”

Tamara, a Navy Veteran, said she and her fellow gardeners still need to keep a watchful eye on the Kansas weather.  “We had a lot of rain last week and I went out to the garden to make sure our cucumbers weren’t drowning,” she said.  They weren’t, so I felt better.  The cucumbers are my favorite.”

The 35-year-old Chicago native said nurturing her cucumbers and other vegetables has allowed her to start reconnecting with the universe outside herself.  “My father has a garden back home in Chicago,” she said.  “For years he tried to get me to spend time with him out there but I was never interested.  Now when I go home to visit I’m going to be out there in the garden with him.  It’s something we can do together.”

Listen to the Plants

Peggy Tice said Tamara’s sense of reconnection is not an unusual occurrence among the Veterans in her Stress Disorders Treatment Program.

“The longer you have PTSD, the harder it is to look outside yourself,” she explained.  “But gardening gets you out of your head and that’s when your anxiety starts to go away.

“It’s easier to relax with plants because they don’t talk back to you,” she added.  “Well, they do talk to you but in their own way.  They tell you when they need water, or fertilizer.  But they don’t argue with you.   They don’t aggravate you.”

Aggravation is something Angela, a 42-year-old Marine Corps Veteran, is learning to leave behind.  “It’s hard sometimes to relax my mind,” she admitted.  “But gardening allows me to express myself in a way that’s peaceful.  I can’t change the things that have happened to me, but I’m learning that I can change how I respond to them.  Now, instead of focusing on my trauma I focus on nurturing something.  It reminds me that I’m still a person.”

Angela said one of her favorite experiences in the garden didn’t involve gardening at all.

“One day we painted golf balls to make them look like lady bugs,” she said.  “Such a simple, child-like task, but it was a real joy for me.  We placed them in the garden just for fun.  Looking at them makes me smile.”