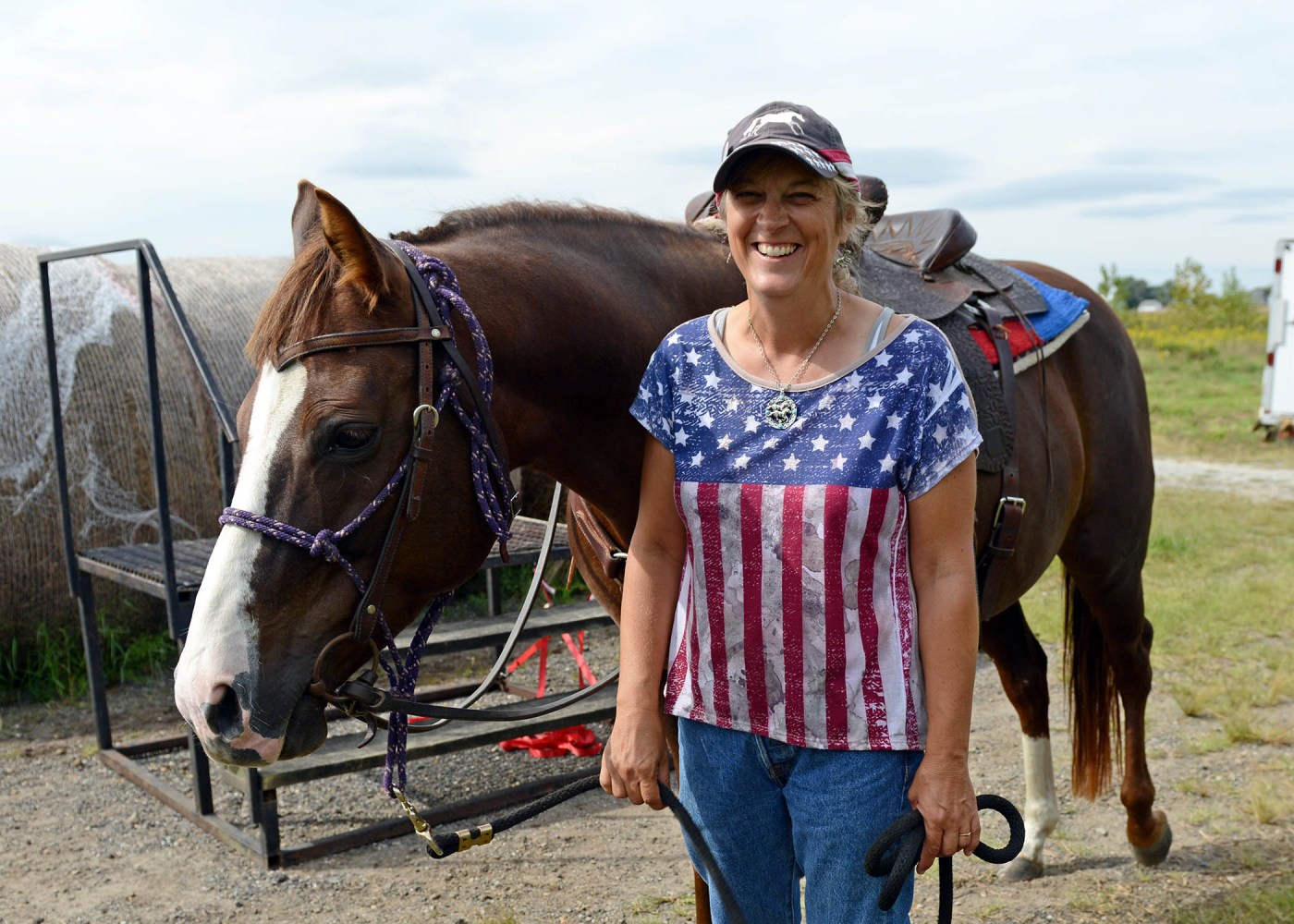 Wednesday was a crisp, beautiful sunny day in Iowa City. I was assigned to cover a morning session of therapeutic horse riding as part of the VA’s National Disabled Veterans TEE Tournament. I didn’t expect to get on a horse that day, but when the opportunity presented itself and there was an open seat on a 15-minute trail ride, I said yes.

It’s no surprise that Veterans across the country are discovering the benefits of therapeutic riding. There’s something to be said for the connection between rider and horse. Besides the fact that it provides an opportunity to get outdoors, especially for those Veterans who have mobility challenges, there’s something healing about focusing on an animal and trusting it to carry you on its back.

The National Disabled Veterans TEE Tournament has been offering horseback riding for five years. That collaboration began with Thunder Rode, when Kirt Sickels, director of the TEE Tournament, received a news release from Thunder Rode founder, Michelle McLain-Kruse. The release announced Thunder Rode had begun offering therapeutic riding services specifically for Veterans. Sickels reached out and asked McLain-Kruse if her organization would be willing to offer horse rides for Veterans as part of VA’s annual event in Iowa City.

Thunder Rode Therapeutic Riding is a nonprofit therapeutic horseback-riding program based in Decorah, Iowa, that teaches special needs individuals how to ride horses independently. It has provided rehabilitative training and therapeutic riding services to individuals of all ages for the past 11 years.

McLain-Kruse’s passion for working with Veterans at the TEE Tournament is clear. Although she says her work in therapeutic riding “just happened to her,” it’s clear that it’s where her heart is. Her volunteers at this event, nearly half of them Veterans, will tell you so.

Many of the Veterans who signed up for horseback riding at this year’s tournament have never ridden a horse.

Before the first ride of the day, a visually impaired Army Veteran who had been signed up spoke out and told the group that she didn’t sign up for riding. Her recreation therapist told her she needed to break out of her comfort zone and signed her up to ride horseback for the first time. So she did. Twice. She loved it so much that after her first ride, she got back in line to go again.

“Her reaction was somewhat typical of someone riding for the first time. First she asked many questions, then she started petting the horse and said, ‘Oh, this is nice.’ You can always tell that they’re no longer nervous when they stop talking about riding a horse and start telling stories and chatting about all kinds of other stuff,” said McLain-Kruse.

McLain-Kruse said it’s amazing to see how therapeutic riding connects Veterans from across generations, cultures and creates a camaraderie that’s hard to find. She shared a story about how her father, a Vietnam Veteran who also volunteered that day, connected with a Veteran his daughter’s age over a location where they’d both served during a ride.

Elmer Hansen, a Vietnam Veteran and longtime volunteer for Thunder Rode, has worked the TEE tournament each year since it began offering therapeutic riding. This year, he brought his wife and daughter along as volunteers.

“There’s nothing better than seeing the smiles on these Veterans’ faces when they go for a ride,” said Hansen.

Just before I got on for a ride, a Veteran with cerebral palsy climbed atop a horse like a natural. He sat sideways on the saddle, picked up both legs and dropped them over the front. McLain-Kruse got excited.

“Oh, you’ve ridden before!” she said.

“These Veterans amaze me, each year, each time I come back,” said McLain-Kruse.

She then instructed me on how to put one foot in the stirrup, step up and swing my other leg around to the other side of the horse. Admittedly, I was intimidated. I didn’t want her, or the horse to sense that I’d only been on a horse once before, nearly 20 years ago.

Once I was on, a volunteer took me for my ride, walking alongside, guiding the horse and talking to me about her recent trip to Washington, D.C., where I work. I rode along, chatting with her, one hand on the saddle and one hand on Star, my horse, near her neck.

I know that it’s not just riding horseback that Veterans find therapeutic. It’s the conversation, the connection to the horse, to the guide, to nature, and the thrill of trying something that’s out of the ordinary for most of us.

VA partners with organizations across the country to offer therapeutic riding services to Veterans with a wide range of disabilities. The TEE Tournament is open to Veterans with visual impairments, amputations, traumatic brain injuries, psychological trauma, neurological conditions, spinal cord injuries and other disabilities. Each year, the TEE Tournament uses a therapeutic format to promote rehabilitation, fellowship and camaraderie among participants. Over 200 Veterans attended this year.

Before I left for the morning, I asked McLain-Kruse why she keeps coming back to the TEE Tournament. She laughed at me.

“Are you kidding me?” she said. “I can’t not. Seriously. This day is so valuable for so many people, I can’t imagine not doing it. That’s the truth.”