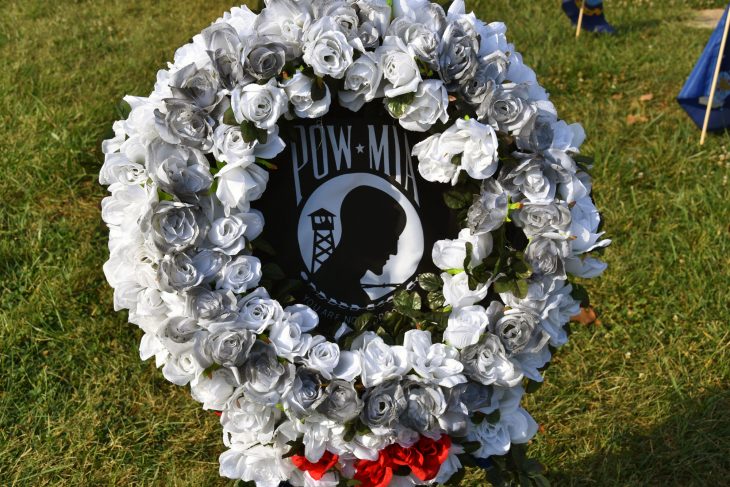 Under clear blue skies and the September sun, Veterans, staff and family members gathered this morning in Lexington, Kentucky, to raise a flag honoring the nation’s prisoners of war and those still missing in action. The ceremony at the Lexington VA Medical Center’s Leestown campus was one of six events taking place in Central and Eastern Kentucky, and one of hundreds taking place across the country on this National POW/MIA Recognition Day.

In Lexington, four former POWs attended the event, three from World War II and one from Korea.

“Our Veterans risked capture, imprisonment, and their lives to protect this country,” said Candace Bradley, a Voluntary Services coordinator at the Lexington VA who helped organize the event. “It’s our duty not to forget their sacrifices and to pay tribute to them.”

Charles E. Dick was taken prisoner in Korea on May 18, 1951 and was held at Ch’ang Song until April 24, 1953. He traveled to Lexington from Monticello, Kentucky, to attend today’s event with his wife Charlcy and daughter Marlene.

“I’m very appreciative that they haven’t forgotten us,” Dick said. “My family knows I love to come to this. It’s not to get recognition, but it’s the atmosphere, the spirit of it, the appreciation.”

Retired school teacher Bertha Hoover and her daughter Vicki Lee Peace attended the flag ceremony to honor the memory of Bertha’s husband, Robert L. Hoover. Hoover was serving in the 143rd Infantry Regiment, 36th Infantry Division when he was captured by the Nazis. PFC Hoover was held at Stalag 9C in Bad Sulza, Germany.

Bertha Hoover said she was honored to participate in today’s event. “I appreciate the fact they’re still remembered.”

World War II Veteran Blas Gerardo, his wife of 68 years, Mary, and their daughter Carmen traveled from Danville, Kentucky, to participate. Gerardo, an Army Veteran, was captured during the Battle of the Bulge.

According to daughter Carmen, when he was taken prisoner, “His mother received a telegram saying he had passed away in the war. When he came back to Los Angeles from Germany [after the POW camp was liberated], she saw the Los Angeles Times front page photo and she recognized him.” That’s how his family learned Gerardo had, in fact, survived the war.

The Gerardo family has a long history of military service, with 10 family members, including grandsons and granddaughters, under the age of 30 currently serving. “The last one that just joined just graduated from high shool, is 17-years-old and went into the Marines,” Carmen Gerardo said. Her father “gave him a little pep talk. Nobody else could hear — it was just between the two of them.”

James Tipton and Alvin Perry were both POWs held in Germany during World War II. Tipton was an Army Air Corps pilot when his plane ran out of fuel over Germany. Today he lives in Waco, Kentucky, less than 10 miles from where he was born, and is one of the few remaining POWs from a group that met once a month. That’s where he met Perry, who was captured by the Nazis in France in 1944.

“We had a POW program that met once a month and at one time we had about 20 people who came,” Perry said. A native of Anderson County, Kentucky, Perry still lives in Lawrenceburg.

Also among those in attendance was Denny Hart, a retired Army Veteran and author of A Soldier’s Anthology: Story-Telling by America’s Veterans, The Kentucky Connection. “Their stories need to be told,” Hart said. “They’re being forgotten and they’re dying off at a rapid pace. They all have a message for today’s generation.”

What is the message Hart has gleaned from his interviews with POWs? “Stand up. Speak out. Let your voices be heard.”