McDonald to Sammies finalists: “As a fellow civil servant, thank you.” 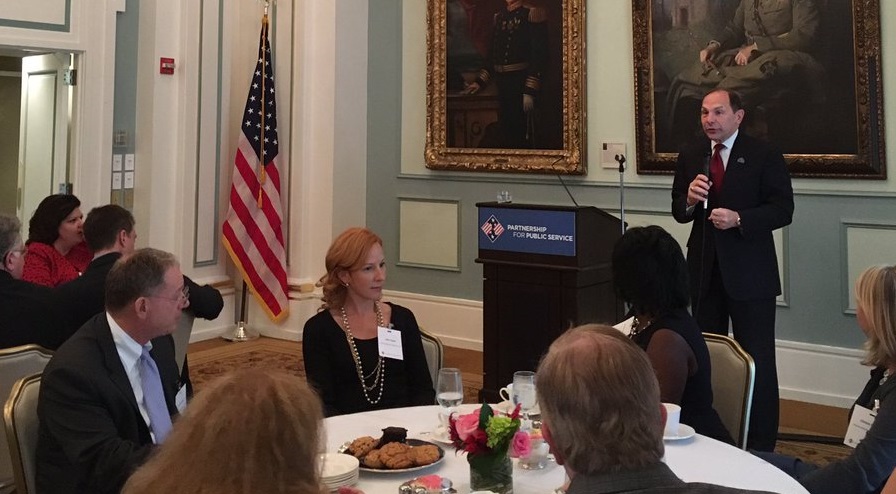 Today in Washington, D.C., the Partnership for Public Service hosts the annual Samuel J. Heyman Service to America awards. Last May during this past Public Service Recognition Week, two VA employees were named as finalists for the 2016 awards, known as the “Sammies.” The awards highlight excellence in the federal workforce and are designed to inspire other talented and dedicated individuals to go into public service.

This afternoon, VA Secretary Bob McDonald spoke to all of the 2016 finalists at a luncheon before tonight’s awards presentation.

“There are a host of reasons to say congratulations to all you finalists, and I know this is neither the first, nor the last, time you’ll hear it. But congratulations,” McDonald said. “Thanks for your commitment, for your insight, for your patriotism, your innovation…for your sense of purpose in your life.”

McDonald recalled the work of two recent award recipients and how their work led to one of his best days, a day “when I saw a paralyzed Veteran walk”

“He stood up from a wheelchair he’d been in for 40 years, and he walked. What a miracle,” McDonald recalled. “Billy walked because some good people showed him how to use a powered exoskeleton device called the ReWalk.”

In 2014, Dr. Ann Spungen and Dr. William Bauman were honored with the Samuel J. Heyman Science and Environment Medal. They were instrumental in getting the ReWalk to the United States and used by Veterans. They’re clinicians at the James J. Peters VA Medical Center in the Bronx.

Dr. Thomas O’Toole is director of the National Center on Homelessness among Veterans, part of the Veterans Health Administration in Providence, Rhode Island

O’Toole created two nationwide programs to help high-risk, high-need homeless Veterans receive the comprehensive medical care, housing assistance and social services they need to get off the street and reclaim their lives.

While working as a primary care doctor at a VA hospital in Rhode Island a decade ago, O’Toole realized that large numbers of homeless Veterans and those at risk of winding up on the streets were not receiving the medical care or the housing assistance, food and social services they desperately needed.

He responded by establishing a clinic that integrated medical care and support services for Veterans — an initiative that has since expanded into a national program now available at 62 VA medical facilities. O’Toole followed this successful pioneering effort by creating a second national project now operating at those 62 medical facilities that identifies and helps homeless Veterans who repeatedly need acute medical services.

Anne Barker Dunn is deputy director of the Homeless Programs Office, part of the Veterans Health Administration in Washington, D.C.

Dunn reduced recidivism among Veterans caught up in the criminal justice system and lowered their chances of becoming homeless by providing housing, job counseling and mental health and drug treatment services.

For years, Veterans who had encounters with the criminal justice system, often as a result of mental health or substance abuse problems, did not receive any special assistance. Many ended up homeless or in prison, and when freed from jail, had no support to help them reenter society and lead productive lives.

Today, two programs led by Dunn and her team from the Veterans Health Administration are helping Veterans who have had problems with the law receive the assistance and treatment they need.

The Health Care for Reentry Veterans program provides assessment services for incarcerated Veterans and information they can use to plan for life outside prison walls. The program also offers released inmates access to medical, psychiatric and social services as well as employment help.

A second initiative, the Veterans Justice Outreach program, helps Veterans who have had interactions with law enforcement or have been jailed briefly for offenses that did not result in prison time. This program involves field staff who work with special Veteran treatment courts to keep individuals out of jail and help them with mental health issues, substance abuse problems and housing needs.

The Service to America Medal are the Oscars of government service — a highly respected honor with a vigorous selection process. Named for the Partnership for Public Service’s late founder who was inspired by President Kennedy’s call to serve in 1963, these awards align with his vision of a dynamic and innovative federal workforce that meets the needs of the American people.

The Partnership for Public Service is a nonprofit, nonpartisan organization whose mission is to help make our government more effective, and the  “Sammies,” honors the many exceptional federal workers who are doing just that — breaking down barriers, overcoming huge challenges and getting results.