More than 4,500 Veterans turn out for VA’s largest outreach event 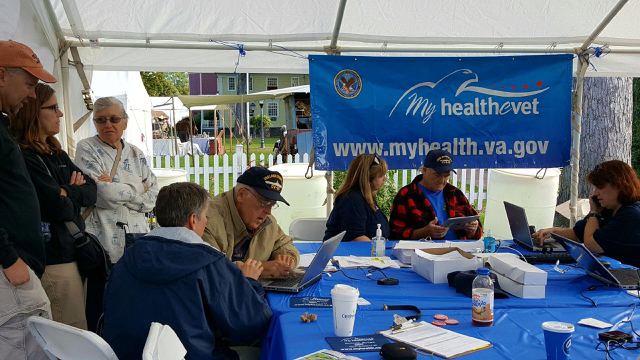 VA’s presence at The Big E, the largest agricultural event on the eastern seaboard and the fifth-largest fair in the nation, is one of VA’s largest outreach events, with VA personnel conducting outreach and representing every major service line, including the Veterans Health Administration and the Veterans Benefit Administration.

Navy Veteran and Connecticut resident Joe Labbadia has been coming to The Big E for almost 60 years. He first visited the VA outreach tent last year and thought it was fantastic. “I don’t really know what this program is, the VA New England Healthcare System,” he said. “I want to get enrolled in something so if one of these days I need it, I’ll be all set.”

For VA New England Healthcare System, it’s important to be out in the community for Veterans like Labbadia, who have made The Big E a part of their family tradition for generations. Instead of Veterans having to come to VA locations, the VA comes to them.

“We have a lot of repeat customers, people who specifically come back every year to get their flu shot. What it brings to the Veteran is a one-stop shop. You literally can come here and you can be enrolled in health care, you can come over to the VBA folks and check on disability compensation, GI bill, VA home loan, if you’re an enrolled Veteran you can get your flu shot. You can register for My HealtheVet if you’re not currently utilizing that service,” said Michael McNamara, VISN outreach program manager, New England Healthcare System.

Former Air Force Combat Camera photographer Stacey Pearsall took professional portraits of Veterans as a part of the Veterans Portrait Project, and the regional mobile Vet Center was also on site to provide readjustment counseling and information resources to Veterans.

Sometimes it takes a Veteran a few times to start taking advantage of their benefits. “After them seeing continuously coming out and being dependable, that’s when they’re like, ‘You know what? I’ll play ball,’” said Paul Corbett, deputy outreach coordinator.

The day ended with the VA staff and the Mobile Vet Center taking a lap around the Big E in a parade, handing out American flags and making sure the community knew that VA is a part of their community and that they are here to help.