Home / Guest Posts / Too Many: AMVETS fight back against Veterans’ suicide

Too Many: AMVETS fight back against Veterans’ suicide 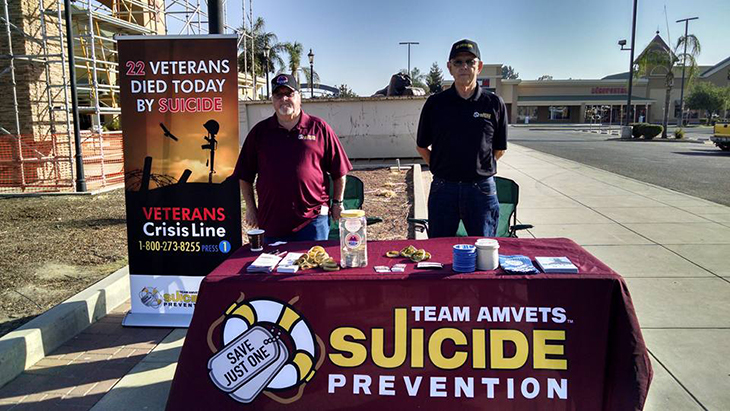 Twenty Veterans commit suicide every day: almost one per hour. That is too many. AMVETS has dedicated itself to shining a light on this issue from our local chapters to our national commander. Our local posts attend community days and car shows to pass out Suicide Prevention Crisis Line materials to Veterans; they volunteer at local police and fire departments as suicide counselors for local hotlines. Together, our members form a guerrilla group out to fight against and prevent veteran suicide through any and all means available.

I was determined to create a positive response to this problem.  The program was titled, Operation Save Just One.

About 5,000 Veterans not receiving help from VA died by suicide. I saw an immediate need to notify the 5,000 that help was available.

In partnership with the VA’s suicide prevention coordinators and AMVETS Department of California’s 9,000 members, we conducted several outreach events contacting Veterans about help that is available to them.

The first year, I was dismayed at the number of Veterans contacted that had no idea any help was available. Early in 2012, I was notified of a young Marine that was saved through our efforts.

From 2012 to 2016, with continued assistance from the VA and its facilities, Operation Save Just One has moved to national prominence. Currently California has 33 “saves”; several other states have reported saves as well.

This article was submitted by AMVETS, one of America’s leading vVterans’ service organizations with over 250,000 members. AMVETS (or American Veterans) has a proud history of assisting Veterans and sponsoring numerous programs that serve our country and its citizens. Membership in AMVETS is open to anyone who is currently serving, or who has honorably served, in the U.S. Armed Forces from World War II to the present, to include the National Guard and Reserves.