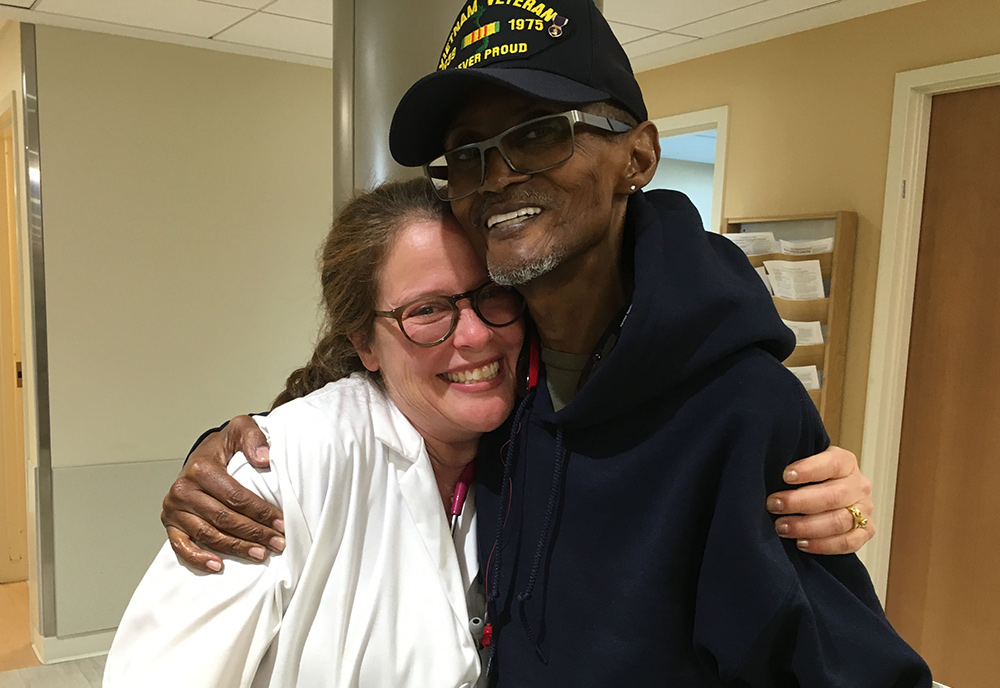 “Hit me like a like a ton of bricks,” Vietnam Marine Corps Veteran Robert Hall, 67, told his primary care (PC) physician Dr. Sabrina Felson. He was explaining how he felt recently hearing from his oncologist there was a bad prognosis for his gastrointestinal cancer.

Dr. Felson said no one can know exactly how long a patient has to live. She reminded Hall he would be meeting with members of the Palliative Care team in upcoming weeks and that the goal now was to make every day the best day possible and to maintain his control in shaping what time he did have left here.

He is clear about his main priority, which is quality time with his family, particularly Jayden, his 11-month old curious and spirited grandson. His daughter, Monique, says that when Jayden sees his grandfather, he is “all gums, he’s so excited.” Jayden is also soothed by Hall’s calm voice and Monique says appreciatively, “Jayden is a handful, but when my dad lies down next to him Jayden just falls asleep.”

Daughter and grandson have recently moved in to stay with and tend to Hall during his illness. “Somehow, he caught on to calling me Bobbie,” said Hall, sharing photos of his dimpled grandson with Dr. Felson, who has been his PC physician for 10 years.

Navy Veteran Penelope Bennett-Kone, Primary Care Program Support Assistant, is very protective of Hall and enjoys talking with him on his frequent visits.

Hall says, “I remember a lot of things about Vietnam.” He held up his hand and flicked his fingers, to describe the “star shells,” flares that were set off at the airstrip where the new troops’ plane landed. “To welcome you to war,” said Dr. Felson.

Stories about “Wet Socks and Rain”

He kept a lot of war details private according to his daughter, who does remember hearing stories about “wet socks, and rain, and bullets flying over your head.” Hall was injured by mortar friendly fire and medivacked to naval hospitals, first in Vietnam and then to Japan before returning to the States. He has 100 percent service connected disability status.

When asked what she admires about her father, Monique says “Everything! I admire anyone who can protect people and put other lives first. That’s an unselfish person.”

Hall, like many of his fellow Vietnam Veterans, struggled with drugs and alcohol when he returned home. It was the unexpected and tragic death of his son at age 13 that pulled him back into the fold of his family. And into the welcoming arms of the church he’d grown up in, where he now serves as Deacon and sings in the choir.

Monique says, “You can’t walk the streets of Harlem with him cause he stops to talk to everyone. Everybody knows him. You run outside for five minutes and it takes three hours.” On a recent morning Hall said he was “Feeling OK, a little up, a little down.” He had been busy all morning answering phone calls, from VA, some people in the church and his daughter. By noon, he had to prop his swollen legs up and take a little nap.

Dr. Felson says that for Hall, like many of the Vietnam Veterans she sees, “Their grandchildren are so important. That is their legacy.”

The hope is that Jayden will walk the streets of Harlem with the same love and respect that his grandfather garners with his patience, bravery and kindness.