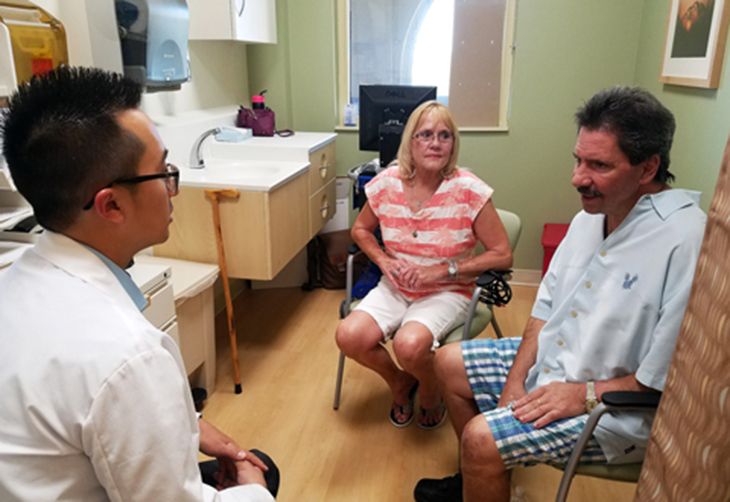 Fatigue is one of the most common symptoms with nearly every known human illness.  The age old question “why am I so tired” can often be answered by observing one or more personal habits, routines or overall lifestyle.  Other times, fatigue can be a sign of something much more serious – even life threatening – like Hepatitis C.

“I felt so tired all the time,” Harbachuck recalled. “It felt like I had the flu or something, and it just wasn’t going away.”

“I knew something wasn’t right,” she said.  “He was in terrible shape both physically and emotionally. I knew we had to get him to the VA as soon as possible for help.”

With some encouragement from his wife, Harbachuck agreed to see his primary care doctor and was tested for Hepatitis C. The results came back positive and the virus had already caused extensive damage to his liver.

The outlook was not good for the once strong rescue diver who participated in the retrieval mission after the Challenger Space Shuttle broke apart off the coast of Cape Canaveral, Florida, in 1986.

At the time of his diagnosis, and because of his condition, he could not be successfully treated and faced the possibility of premature death. This fear would soon subside with the advent of new antiviral medications that effectively cure the disease.

Hepatitis C is a disease that affects the liver.  It is caused by a virus, called the Hepatitis C virus, or HCV for short.  The virus is most often spread through contact with infected blood or blood products.

For some people, the disease is short-term.  For the majority of people infected, up to 85 percent, the disease becomes a long-term infection that can result in serious health problems and even death. Veterans born between 1945 and 1965 are the highest at-risk population in the country.

“Many people who are infected with the virus live with it for years before experiencing any significant symptoms,” said Dr. Joseph Hong, Hepatology Pharmacy program manager at Bay Pines VA Healthcare System.

“The disease is very asymptomatic, which makes it very dangerous.  Often, acute onset of fatigue is the only real symptom,” he said. “The longer an individual is infected, the more damage the virus causes. The worst case scenario is end stage liver disease and liver failure, which can mean certain death.”

According to Hong, about one in 10 Veterans in the at-risk age group (50-70 years of age) are diagnosed with Hepatitis C, but cautioned that the virus does not discriminate when it comes to infection.

“This is a very dangerous disease,” Hong reiterated.  “Veterans with concerns of a possible exposure at any point in their life should be adamant about testing, no matter their age.  The sooner we know about the infection, the better the outcome.  This is especially true today with the availability of new treatment options.”

In 2014, after decades of research and development, the Food and Drug Administration (FDA) approved several new medication therapies.  Many more have been developed since and have been effectively shown to cure 95 to 99 percent of patients with little or no side effects.

The typical treatment regimen requires patients to take one pill a day for 12 weeks.  While treatment for a non-Veteran can cost up to $80,000, Veterans enrolled for VA health care receive the medications at no cost or pay an $8-9 co-pay for each one-month supply.

In September 2015, Harbachuck was the first Bay Pines VAHCS patient treated with Daclatasvir, a newer medication approved by the FDA in July 2015. Daclatasvir is one of several medications available to Veterans enrolled for VA health care who require Hepatitis C treatment.

After being on the medication only four weeks, the virus could no longer be detected in Harbachuck’s body.  The result was the same after he completed the full twelve weeks of treatment. He was cured.

“I got a new lease on life. Praise the lord, you know?” Peter said, reflecting on the outcome of his treatment.  “I can’t even describe the feeling.  It was like hitting the lottery or something.  I thought I was going to die from [Hepatitis C] at a young age.” he said.

Harbachuck wife Annie was even more excited about the news.

“I was convinced that the treatment would work. I had to be,” she said. “The treatment was an absolute gift.  I felt so good for Peter.  The light in his eyes seemed to shine brighter, and now we have the opportunity to move forward.”

For the first time in 10 years, Harbachuck will celebrate his birthday free of the virus.  He will turn 50 on October 24.

Get tested. Get treated.

Peter is one of about 1,000 Veterans successfully treated by the Bay Pines VA with one of the new medications.  According to Hong, many more should seek testing and treatment.

“We have definitely seen an increase in the number of Veterans seeking testing and treatment,” he said.  “VA is the largest provider of Hepatitis C treatment in the country.”

Veterans with questions on testing or evaluation of Hepatitis C are encouraged to contact their Patient Aligned Care Team (PACT) or visit www.hepatitis.va.gov.

About the author: Jason W. Dangel is a public affairs officer at the Bay Pines VA Health Care System.