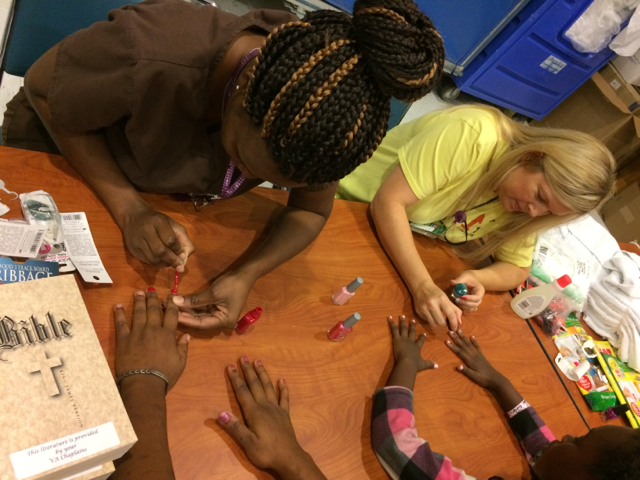 “Have you been up to see the operation center?” Dr. Richard Stone, VA’s Principal Under Secretary for Health, asks me.

Having just swept over Florida, Hurricane Matthew was traveling up the Atlantic coast. Our discussions that morning had covered placement of resources and contingency plans for the next towns along its path. As we waited for the elevator, I reflected on my knowledge of VA. Like most physicians who trained in the U.S., my foundation of knowledge and experience was built through learning from my Veteran patients. VA health care meant a vast network of medical hospitals, replete with canteens, hoteling services, and outpatient clinics, which provided a level of coordinated care infrequently matched in the private sector, for a group of people who were treasured. Now, several years after working at a VA medical center and 53 days into my new position at VA Central Office, I had discovered yet another facet of this compassionate organization.

We stepped out of the elevator and went through an unassuming door. I was immediately greeted by a wall of talking heads and swirling hurricane graphics from the TVs tuned to major news networks. Pods of computers with analysts on phones were surrounded by spaces created for private group huddles. Dr. Stone took in the room with me and then politely excused himself to join a high-level operations meeting.

This agency takes Abraham Lincoln’s commitment to serve Veterans and families to heart: to care for those “who shall have borne the battle”  and their families, a charge that can be found emblazoned on the front of the central headquarters building in Washington D.C. Caring for those who served to keep America safe means more than delivering health care and other services during times of stability; it also encompasses an explicit mission to serve Veterans and the community during a national emergency.

Like the central operations center, the operation command centers were up and working all across the southeast in preparation for the hurricane, and leveraged unparalleled medical resources from our VA health care system to ensure patients were safe. I learned that VA deployed employees to check in on each Veteran living at home who was on supplemental oxygen, and provided supplies to ensure they had three days of extra oxygen to bridge a potential period when road closures and flooding would prevent delivery of more supplies.

An evacuation plan for Veterans and families from critical areas had been devised not only to get them to a shelter that had medical and mental care providers, but to a location that also had mobile Canteen services waiting to feed them comfort food. I smiled when I received a picture from the Carl Vinson VAMC, showing a nail painting party taking place in their evacuee shelter in Dublin, Georgia. Employees mingling with Veterans, family members and even pets turned a frightening few days into a more comfortable experience. Alongside the nail painting, a planned customer service week event was expanded to an ice cream and cookie social for evacuees who were grateful and thanked them profusely. TVs, a Wii gaming system and a small library brought entertainment and a slice of home.

Like no other system in the country, daresay the world, getting cared for by VA means not only receiving health care and other services during times of stability, but the assurance that during natural disasters like Hurricane Matthew, a family is waiting to welcome you and take care of you with compassion and a bit of fun.

About the author: Tina Shah, M.D. M.P.H., is a White House Fellow appointed to the Office of the Under Secretary for Health