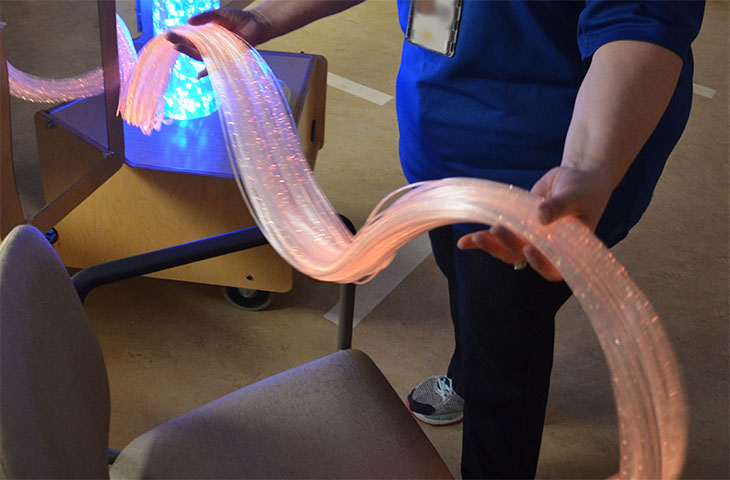 Tucked away in a corner of the Haley’s Cove Community Living Center is a nondescript room with some special equipment and a funny name.

The Snoezelen (pronounced SNOOZE-a-len) Room holds equipment that is an important part of the treatment regimen for patients with severe dementia.  Also called a multi-sensory environment, equipment in the room is used to stimulate the patient’s senses to evoke a calming and therapeutic effect.

The therapy was invented in the late 1970s by two Dutch therapists and the name is a contraction of two Dutch words, “snuffelen” – to seek and explore – and “doezelen” – to relax.

Recreation Therapist Christine Nevah said the environment is used to stimulate dementia patients to give them an outlet and to elicit responses.

“One of our machines is called the bubble tube, which incorporates water and light and changes colors, and they have light strings that you drape on a person like a kind of blanket,” Nevah explained.  “It gives them some sense of security.  A lot of times folks with dementia are in their own kind of world and we’re trying to bring some normalcy to what’s going on inside them.”

James A. Haley Veterans’ Hospital Recreation Therapist Christine Nevah prepares the rope lights and bubble tube in the hospital’s Snoezelen Room for the next patient. The room in the Haley’s Cove Community Living Center is designed to help calm anxious and agitated dementia patients in a multi-sensory environment.

Nevah also uses the effect wheel, a disc that rotates and projects scenes on the wall including tropical fish, tropical birds and woodland scenes.  Recordings of waves and water sounds, birds chirping and other soothing sounds are complimented by aromatherapy using essential oils so all of the patient’s senses are stimulated.

The desired effect is to calm a patient who may be suffering from anxiety or anger because they are unsure of what’s going on in the environment around them.

“One Veteran in particular, whenever they give him any kind of care, whether it’s bathing or dressing, he usually gets agitated so I’ll try to bring him into this environment with the soothing music and the lights to try to calm him back down after that,” Nevah said.  “The point is to try to help them keep calm.”

Nevah said she also talks with family members to find out what the Veteran liked before his or her illness.  A female Veteran, she said, likes Elvis and Garth Brooks, so playing that kind of music has a relaxing effect on her.

All of the Snoezelen equipment is portable so it can be taken to patients who can’t make it to the room themselves, and all is easily sanitized between patients, Nevah said.  It’s also used on a regular basis since she has a full schedule of patients during the week.

“Depending on the Veteran and how they’re doing, I usually work with them for about 30 minutes and I try to see them twice a week,” Nevah said.  “I work hand-in-hand with psychology and psychiatry because they’re the ones who determine the functionality of what level (the patient) is at, so I go based on their criteria.”

Nevah explained that the ultimate goal is to have several people on each shift at the Community Living Center trained to use the Snoezelen equipment.

“Many disciplines can use the equipment, and our goal is to train people like certified nurse assistants how to use it so that if somebody is having an issue when we’re not here they can bring them into the environment and try to help them,” Nevah said.

While the immediate goal of the Snoezelen Room is to help agitated patients calm down and relax, Nevah said that using the equipment also has longer term effects like helping the patient retain the cognitive abilities they still have intact as long as possible.  She’s also seen improvements in some patients.

“One of our Veterans that I work with, she would only use one statement, say one statement to everything,” Nevah said.  “And since I’ve been working with her she is actually responding to what you’re asking her with more appropriate responses other than that one statement.  So it seems like over time they get more comfortable and it activates another level in them.  Then you’re able to work with them better.”

For some people, Snoezelen is a funny name for a room and may evoke images of a Dr. Seuss character.   But as long as it is a character with a calming, therapeutic effect on those around it, that’s okay.