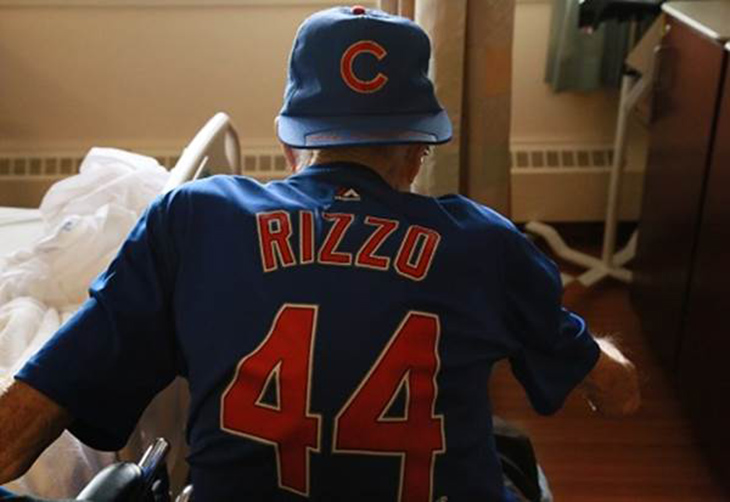 The following is a partial post from the original that appears on the Marion VA Medical Center’s website.

WWII Navy Veteran Robert Perkins is visiting the Marion VA Community Living Center for a short stint to re-build strength. Although his physical condition isn’t quite up to par, his spirits and love of the Cubs sure are during the World Series that enters Game 7.

“I’ve been a Cubs fan since I can remember,” said Perkins whose grandfather, a WWI Veteran, used to take him and his siblings to watch the Cubs at Wrigley Field. “We just enjoyed being there, the atmosphere was nice and it was a beautiful old stadium. My grandpa even gave up half his pension to get seats to watch them win the Series in 1908.”

During his time in service, he recalls listening to baseball games in the chow hall — including the 1945 World Series — the last time the Cubs played for the championship.  “Every chance I had to listen to the Cubs, I made sure to listen.”

Perkins served for six years in the Navy as a radar operator. He jokes about how he had trouble keeping his mouth shut as a young adult, but as an operator his job was top secret, so he had to keep his lips sealed.

“All the other personnel hated us, especially our officers because they wanted us to tell them what we knew. But we had red tags on our uniforms to remind us of our loyalty to Uncle Sam. We even had special chow privileges, boy were the other sailors jealous,” laughs Perkins.

But it wasn’t all fun and privileges, Perkins spent five years in the Pacific Ocean fighting the Japanese from one island to the next.

“We rode on smaller ships that were 100 feet long and only 40 feet wide. We would get so close to the enemy that you could hear them breathing. It was five years of living hell,” said the now 94-year-old Perkins.

When he isn’t working with Marion VA physical therapists, Perkins still lives alone. His son, Jack, a Vietnam Veteran, says his father “still washes his own dishes in the evenings. Don’t let his age fool you, he still gets around and manages to live on his own. He is still independent and strong as ever.”

While his job in the service required him to keep quiet about intelligence, but he sure isn’t quiet at all about being a Cubs fan.  To find out who his current favorite Cubs player is, as well as his all-time favorites, read the full story on Marion VA Medical Center’s website.