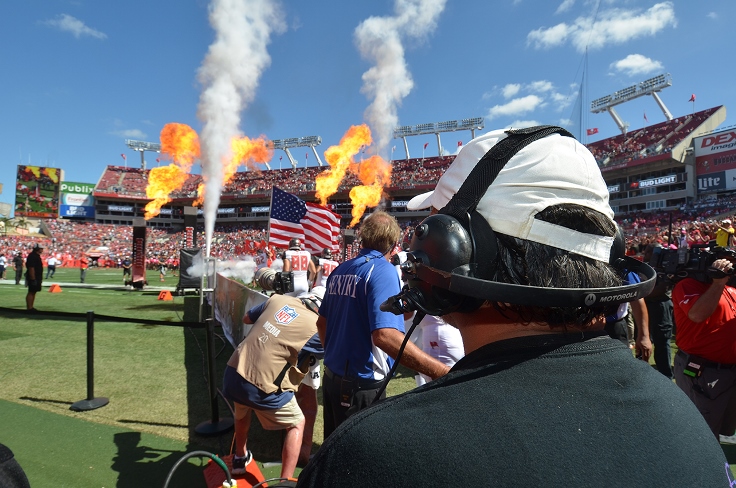 During the week, Chuck Flanagan is a supply technician at the James A. Haley Veterans’ Hospital, ordering, receiving and delivering the materials used throughout the hospital to care for our nation’s Veterans.

But his off-duty hours are often spent in a somewhat flashier fashion.

Flanagan, a 22-year VA employee, has also been working in the pyrotechnics and special effects industry during his off-duty time for more than 10 years. As a lead technician, he sets up and sets off fireworks displays and other effects for clients large and small, but his most recent regular gig with the company has been working for the NFL’s Tampa Bay Buccaneers.

Anyone who has watched the team’s home game opening activities at Tampa’s Raymond James Stadium in the last five seasons has seen Flanagan’s work. Bucs players run onto the field during player introductions through a cloud of fog as flames burst from towers on either side of them.  Flanagan controls the flames while one of his teammates controls the fog and smoke.

Flanagan, a former Army National Guardsman, described the player introductions effects as “organized chaos,” but the hours leading up to those few minutes are spent with heavy labor and more than a little waiting time.

“The initial setup usually takes about five hours because you have to bring the equipment into the stadium, assemble it, put the tanks on, bring it out to the field, and test it to make sure everything is operating correctly,” Flanagan said of activities before the first home game of the season. “Then to set up the actual day of the show takes us about 45 minutes to an hour putting the tanks on the carts, securing them and making sure the electronic systems are working correctly.”

That equipment includes two 1,600 pound carts with flame projectors on towers as well as CO2 fog projectors. There are also two other flame projector towers and two towers that shoot a CO2 cloud high into the air as the players take the field.

Much of the carts’ weight is from the four 200-pound CO2 tanks and two 60-pound propane tanks on each, with another six 200-pound tanks operating the two CO2 towers. About 85 to 90 percent of the CO2 and propane will be expended during the player introductions.

Other members of the pyrotechnics team sit in each scoreboard and control percussion cannons used during the animated pirate fight sequence shown on the scoreboards before the game, as well as fireworks that are shot from the top of the boards. They also do the special effects and fireworks displays for special events for the Bucs at the stadium, like the induction of retired player John Lynch into the Ring of Honor as part of a Thursday Night Football  halftime show.

While working the Buccaneers games has been a highlight of his off-duty career so far, he’s also worked other large fireworks displays.

Flanagan said he’s been a fan of the Buccaneers since moving to Florida in 1985, so the decision to accept the offer to help at the games didn’t take much thought.

“I got offered the opportunity to help out on the show and it was the most thrilling moment in the world to me,” Flanagan said. “It’s my favorite NFL team and I get to help bring them on the field.”

The adrenaline rush that takes place during the organized chaos that is player introductions means a lot to him as well.

“My sister-in-law said it best,” he explained. “I feel like a rock star because I get 70,000 people in the stadium on their feet screaming.”