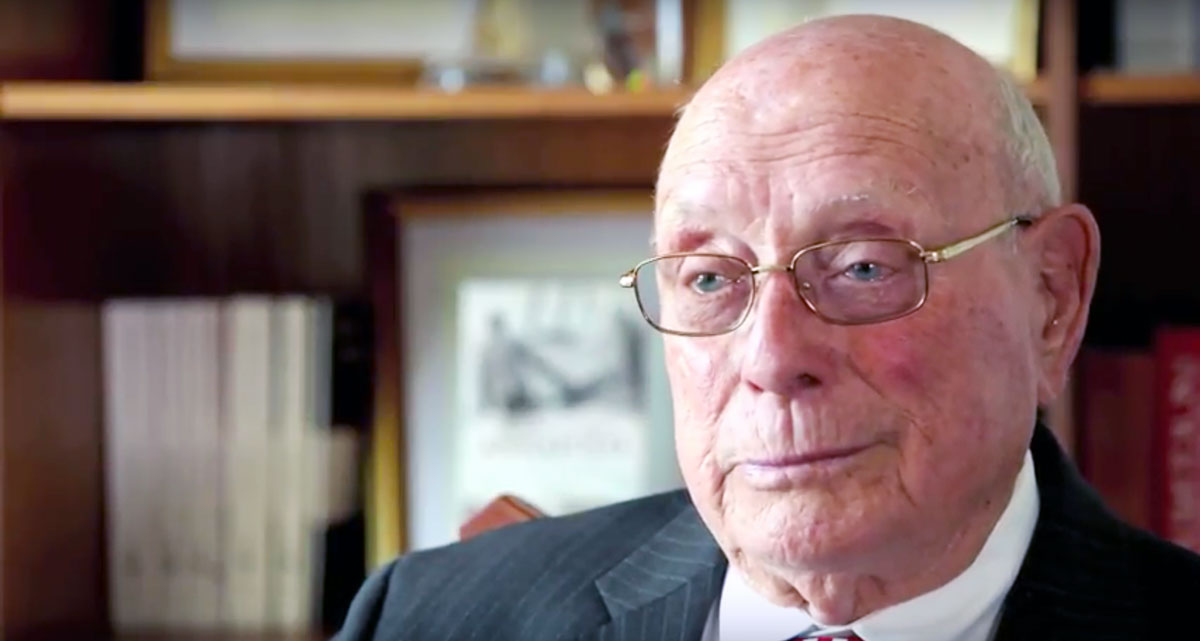 Hershel “Woody” Williams does not remember most of the Battle of Iwo Jima. After he took out the first pillbox, he does not remember how he returned to his station five more times over a period of four hours to retrieve serviced flamethrowers and continued to take out pillbox after pillbox. For those actions, Williams would be awarded the Medal of Honor.

“Much of that day is just absolutely blank. There are other things that are so vivid that I’ve never been able to get them out of there,” said Williams as he sat in a corner office at the VA central office in Washington, D.C. The window overlooked the White House and the Washington Monument, where 70 years earlier he stood on the South Lawn while President Harry Truman placed the Medal around his neck.

Williams grew up on a dairy farm in West Virginia. He tried to enlist in the Marine Corps when he was just 17, but his mother wouldn’t sign his consent form. One month after his 18th birthday, he found himself at a Marine recruiter’s office, only to be turned away for being two inches too short. One year later, the Marine Corps removed the height requirement and in May 1943, Williams successfully enlisted at 19 years old.

Like all Marines, Williams was trained first as a rifleman during his boot camp in San Diego, California. When he arrived overseas, he worked as a flamethrower demolition operator. He joined the 3rd Marine Division on Guadalcanal, and then fought in the campaign to take back Guam, which had been occupied by the Japanese. A year later, he was put on a troopship headed for Iwo Jima. He had no idea where he was going until he got on the ship, where he was told they would be a reserve division to the 4th and 5th Marine Divisions, because they didn’t think they would need as many Marines to capture that tiny island.

Williams was assigned four Marines, two automatic riflemen and two regular riflemen, and their job was to protect him as he tried to get to a pillbox and take it out.

I didn’t know it, because things were chaotic, but two of those Marines gave their life that day. They were there protecting me,” said Williams.

His Medal of Honor citation reads, “on one occasion he daringly mounted a pillbox to insert the nozzle of his flame thrower through the air vent, kill the occupants and silence the gun; on another he grimly charged enemy riflemen who attempted to stop him with bayonets and destroyed them with a burst of flame from his weapon.”

These events happened on the same day that the American flag was iconically raised at the top of Mount Suribachi.

“I was about 1,000 yards or so from Mount Suribachi, and the first thing I noticed was some of the Marines around me were jumping up and down and yelling and saying something about a flag and firing the weapons into the air. I had no idea what was going on until I saw the flag,” he said. “And of course I begun doing the same thing they were doing and we were celebrating,” he said.

Although many of those day’s events were a blur, one vision is still all too vivid for William’s despite the number years that have past.

The thing that sticks out most in my mind are the Marines that we had lost wrapped in ponchos, because we had no body bags back in those days, and just stacked like cordwood,” he said. “I’ve never forgotten that,” he said.

Yet, Williams continued to fight through the remainder of the five-week-long battle, and was wounded on March 6, for which he was awarded the Purple Heart.

The first time he had an idea that he would be awarded the Medal of Honor came when a clerk from West Virginia came to his tent and told him that he typed up a letter recommending him for a medal. The clerk didn’t know what the medal was, and neither did Williams’ first sergeant. All he was told was to put on his khakis because he was going to General Erskine’s tent.

“I was absolutely scared to death. I didn’t know what I had done that got me in enough trouble that I had to go see the general,” said Williams. It was in the tent that the general told him that he would receive Medal of Honor. “I had never heard of it, I didn’t know what it was and I had no reason to even think about it,” he said.

Williams began his long journey back to Washington D.C., riding for the first time on an airplane from Guam to San Francisco. His plane ride back was a sobering one.

“There were 47 or 48 former prisoners of war on that plane. They were probably the happiest group of people that I’ve ever seen, because they had been released after three or four years of Japanese prison camps, but they looked almost inhuman,” he said. “Their cheeks were hollow, their eyes were sunken in. Very skinny, very poor physically.

There were 13 others who were also receiving the Medal of Honor the same day.

“Nobody ever shared with me that citation. Nobody had ever said that this is what the Medal of Honor represents, or this is what is going to happen to you afterwards. Nothing like that.”

Most of the ceremony was a blur to him, but he did remember what President Truman said to him as he fastened the Medal around his neck. “He said to me, as he said in many ways, different ways to different people, that he would rather have this medal than to be president,” said Williams.

While in Washington, he also had a meeting with the commandant of the Marine Corps, General A. A. Vandegrift, a Medal of Honor recipient who commanded the 1st Marine Division to victory in the Battle of Guadalcanal. Williams stood at attention the whole time and never looked directly at the commandant, and doesn’t remember most of the conversation because he was so scared.

“I’ve said, ‘I don’t know where I was more frightened—with the president or the commandant.’ I think with the commandant,” said Williams.

Despite the enormity of the situation, he clearly recalls two specific statements Vandegrift made to him that day: “That medal does not belong to you. It belongs to all those Marines who never got to come home,” and “Don’t ever do anything that would tarnish that medal.”

“I remember those words. I’ve held on to them. So I’ve kept my medal shined from that day on,” Williams said.

After the war, Williams returned to West Virginia and worked as an engineering company as a supply officer. He was only working there for a short time when we received a letter from the VA offering him a job as a contact representative for $2,980 a year. He had never heard of that much money in his life, compared to the $45 a month he earned in the Marine Corps, so he took the job.

Williams had never dreamed of what a great job this would be for him. He had never done anything administrative and spent a lot of time working with prisoners of war.

“After I got involved and was able to, most days, do something to assist people that maybe would have never received that assistance, you’d always come home in the evening feeling good and anxious to get back to work the next morning because you knew that you were going to be able to do something that would help somebody,” he said. “That, I guess, was engrained in me. Something that really gave me great pleasure, and I’ve said it was the very best job anyone has ever had. And they paid me well to do it!” he said.

For 33 years, from 1946 to 1976, he served as a contact representative with VA in field offices located in West Virginia and New Mexico.

Although he retired from his work at VA, Williams has never stopped serving Veterans. He formed his own foundation, the Hershel Woody Williams Medal of Honor Foundation, dedicated to honoring family members of fallen Servicemembers.

To date, his foundation has worked to construct 10 memorials for Gold Star families in eight states. There are more than 20 other memorials currently in the works all of the country. His foundation is also campaigning to establish Medal of Honor Memorial Walls in VA Medical Centers around the country. There are already displays in West Virginia honoring the Medal of Honor recipients in their local community.

We sometimes forget the sacrifices that have been made by families, by loved ones, by Veterans, just so we can wake up free every morning. And without them, without that commitment, that dedication and that sacrifice, we wouldn’t be America. We’d be something else,” said Williams.