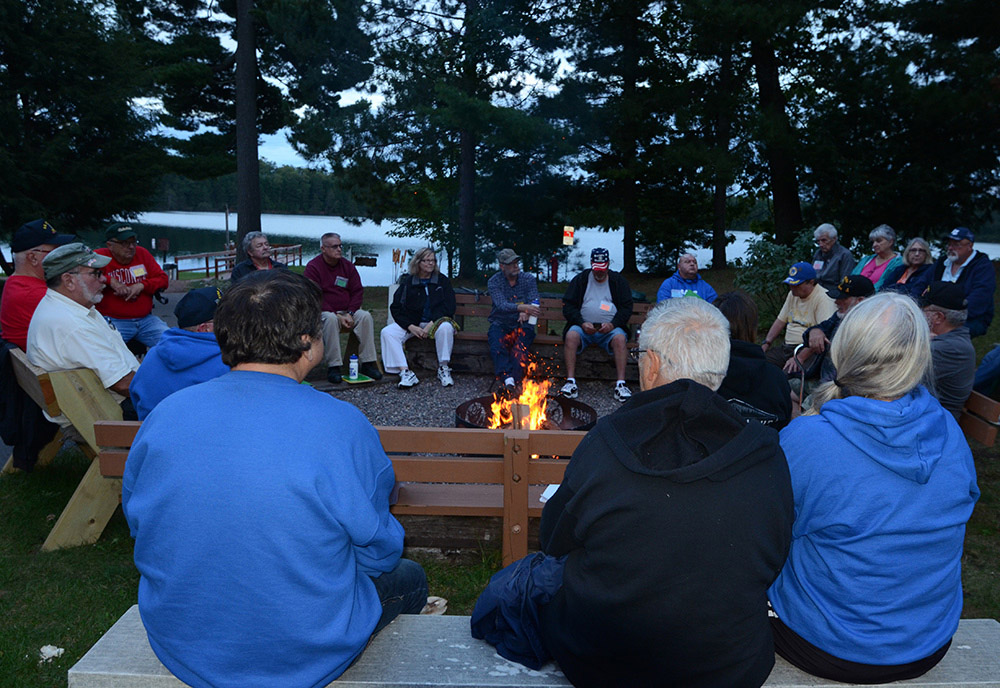 Steve Biever was slowly dying and nobody knew why. There were blinding headaches, loss of vision and unexplainable pains. Getting out of bed was a chore. Deep depression set in.

Then he met Carole Cole, a nurse and certified diabetic educator at the Appleton VA Clinic. “Have you ever had an A1c?” she asked.

A1c is a diabetic test to see how well your body controls the amount of sugar in the blood. Normal levels are between 4 and 5.6 percent. Biever’s were over 11 percent — far into the danger zone on the glucose scale, with a high risk of severe complications, including organ failure. He was only 43, but his body was attacking itself and shutting down.

“Carole saved my life, no question about it,” Biever said. “She said, ‘Oh my Lord, this should have been tested three years ago!’ But damn it, I never complained. I had all the symptoms — going to the bathroom 10 times a night, shakes, blurry vision, and the first thing I thought was, ‘I’m an Army guy. I can handle this.’ But then I couldn’t handle it.”

“I can’t take all the credit,” VA’s Cole said. “Steve was pretty sick and had multiple health problems, plus other issues that weren’t diagnosed yet. At first, he was treated for individual symptoms, but the more we start talking and the more he started telling me about all the symptoms, it seemed obvious.”

Biever is more to the point: “She’s my guardian angel. I’m here today because of her.”

Doctors immediately put Biever on Metformin, a drug to help regulate his blood sugars. Cole told him about the first-ever Diabetes Camp that was scheduled a couple weeks later at Camp American Legion. That was 2012. The camp was the brainchild of Diane Kesler, also a certified diabetic educator and nurse at the clinic, who each year brings Cole and other nurses and staff to manage the program, all on their own time.

Biever has since lost 56 pounds and is an ongoing success story at the annual Diabetes Camp to help Veterans learn about and manage their disease.

He was at Camp American Legion in Lake Tomahawk, Wis., this past September, along with 26 other Veterans from the Appleton area who were learning how to understand and manage their diabetes.

“I was still so sick and I don’t know how she talked me into it. I came up that first year, and couldn’t even get out of bed for the first part of it,” Biever said. “That’s how sick I was. I couldn’t even make it to some of the events. I was near death.”

Biever, who spent three years in the Army and another 10 in the National Guard and Reserve, wasn’t always that way. He built a successful DJ company and depended on his energy as part of his career.

“It really did sneak up, and nobody expects that,” he said. “At first you say you don’t feel good, and then it gets worse. I couldn’t figure it out. I don’t get the flu. I don’t get colds. I don’t drink. I don’t do drugs. And it’s really weird because I just lost a friend to diabetes and still didn’t realize.

“But they call diabetes a silent killer,” Biever added. “It’s very slow, it’s very painful. You lose a toe. Then you lose half a foot. Then you lose a leg. I love life. I’m an actor, or at least I’m trying to be. I run my company, and can’t afford to be sick. If you’re a fisherman, you don’t go fishing for trout in the toilet. You have to get to events like this and get educated.”

After staying in bed all day that first Friday, Biever made it out of his cabin Saturday and Sunday to eat and socialize with some of the other Vets.

Biever changed his diet. He walks and works out on the cardio equipment at his local gym. And slowly, ever so slowly, the weight dropped and he felt better. He went from 228 to 170 pounds. “Every day you feel a little better, but when you’re so sick you don’t realize it. It took me two years before I felt like I got my life back.”

Cole said those who are newly diagnosed have the hardest time working on a diet.

“You tell them to go to a dietitian and they will say, ‘I’m not going to listen to some skinny person tell me how to eat.’ They stay in denial and think it won’t matter until they get too sick and then it can be like putting scrambled eggs back together in the shell. The sooner people accept it and work at it, the better their chances.”

For Nurse Cole, the Fight is Personal

“When you get sick and tired of being sick, then you meet with a dietitian,” Biever said. “Too many people are hard-headed. Look at the group photos we take every year. You can see people who came once and didn’t come back. You can see how many have died. That could be me.”

While he tells his story, a group of Veterans a few tables away learn how to make homemade soap. Earlier in the day, they took tai chi. There was also a fly fishing lure lesson and a chance to go fishing on the pontoon. “They don’t do that just for fun, they do it to show these guys they need to get their butts off the couch if they want to live,” Biever said.

And Biever said he wants to live, so he does what he can, encourages others and still looks forward to that one weekend a year at Camp American Legion.

“I can’t tell you how much it does for me, as a nurse, to see someone like Steve succeed,” Cole said. “This will always be one of my wonderful moments in my career.”