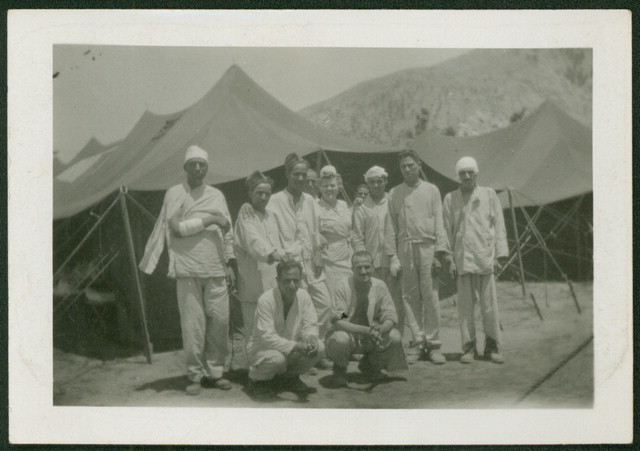 Above: 1LT Vera Gustafson with patients, Maddaloni, Italy, May, 1944

Vera Cecelia Gustafson Palmer experienced World War II in a unique way. She was seldom far from the front, and she saw the worst that the war inflicted, but she also saw heroism on a daily basis. And many saw hers. Palmer was a proud soldier of the Army Nurse Corps.

During World War II, women participated in the war effort in various ways. They bought war bonds. They worked in war industries. Some joined the military. Nurses willingly left the safety of their homes and offered their expertise to the Army, saving lives by caring for soldiers in tough battlefield conditions. Vera Cecelia Gustafson Palmer was one of these nurses. On May 28, 2003, at age 86, Mrs. Palmer sat down with Michael Willie to record an oral history for the Veterans History Project. For much of the interview, she read from a written document rife with details about her time in the Army Nurse Corps. Her entire Veterans History Project collection has been digitized, and it can be accessed online here..

Palmer was born and raised in Chicago, Illinois, in a family of seven children – six girls and a boy. After graduating from high school, she had a couple of different jobs before she “went into training – nurse’s training,” which lasted for three years. At the end of her program, she became a registered nurse, and she “worked in doctor’s offices…[and as] an industrial nurse” before her coworkers convinced her to enlist in the Army Nurse Corps. The army unit that she joined was composed largely of “graduates of the University of Illinois Medical School and [people] from the Midwest.” She became a member of the 27th Evacuation Hospital, which, as she recalled, consisted of “49 officers, including the doctors, 52 nurses, and 307 enlisted men.” Although she did not know him when she entered the army, the man that she would marry, Sergeant Walter Palmer, was an enlistee in her unit.

The United States was deeply involved in World War II when Palmer, then Vera Gustafson, first joined the Army Nurse Corps, but she spent her first year and a half on duty in the United States, first at Camp Breckinridge, Kentucky, and later doing maneuvers in Tennessee and West Virginia. Then, “[i]n the spring of ’44, [her unit] traveled to Fort Devers, Massachusetts” to get outfitted, and the nurses and some of the officers moved on to Camp Patrick Henry, in Newport News, Virginia. From there, they “headed for Europe.” When asked if she got seasick on the trip across the Atlantic Ocean, Palmer responded with, “Not me. I’m a Viking!” followed by a big laugh.

The ship brought them to Casablanca, and they then traveled by train and automobile to Oran, Algeria, “to a campsite…right by the Mediterranean Sea.” Then, on May 9, 1944, they “sailed for Naples.” Three days later, Palmer was working at a “1,500-bed hospital and [getting] ready to receive patients from the Battle of [Monte] Cassino.” They had patients of many different nationalities and ethnicities, and found them all to be “grateful, cooperative, and appreciative.” Palmer recalled that, among the patients, “wounds were proudly unbandaged to [show] their fellow patients.” In total, her unit cared for “1,467 patients” before moving on to their next assignment.

After their time in Italy, the 27th Evacuation Hospital “set sail for southern France.” When they arrived, the people “welcomed [them] and showered [them] with fruit and crunchy French bread.” In this location, they were responsible for treating American, British, and French personnel. They moved north by train and truck in order to stay close enough to the action to be of help. During the Battle of the Bulge, the unit did such great work that it earned the Citation of Merit. Since “German planes were dropping bombs all too close to [them],” they were evacuated on December 28, 1944. Mrs. Palmer’s unit continued to follow the Army’s advances to care for those who were wounded along the way, moving toward the Rhine and, later, into Dreisen, Germany. Along the way, her unit was also given the responsibility of helping to nurse hundreds of returning prisoners of war back to health. Palmer recalled that “[t]hey all told similar stories of cruelty and starvation.”

Palmer’s next assignment was to help care for people who had been imprisoned in Dachau Concentration Camp at the time of its liberation. She recalled the acuteness of the hunger she encountered among the people in Dachau, describing one woman, “a Hungarian political prisoner, [who], at the time of her capture, …had spoke[n] seven languages. And here she was just worried about getting her food.” She also remembered that “[i]f they couldn’t finish their food, they stuffed it under their pillow for later.”

Later, Palmer moved on to a less emotionally draining assignment, where her unit “had little activity except for accidents and general illnesses.” During this assignment, even though the United States and Germany had just been enemies, “[n]ative German boys collected [the Americans’] laundry and took it home for their mothers to wash. …After the war, [she] sent care packages to” the young boys who had done this for her husband and for her. She also kept in touch with them throughout her life and noted that “[w]e still exchange Christmas cards.”

While Palmer was in Europe, the Army gave her the opportunity to explore her surroundings and travel whenever it could. She recalled that, in Rome, “a priest who been, uh, in the United States…offered to take us through and see the Sistine Chapel, which, uh, was not open to usual tours.” As her time in Europe continued, she “went to London, the French Riviera, Sorento, Riems, Paris, and Dieppe. “ In Dieppe, she saw women making “beautiful” lace by hand. During her time in England, she “visited…the Salisbury Cathedral, which is an example of twelfth century – pure twelfth century Gothic architecture.” Additionally, Palmer sang at the weddings of three nurses who got married while they were stationed in Europe.

After returning to the United States, the 27th Evacuation Hospital had reunions “in the Chicago area, ‘round O’Hare field…every few years, and then…every five years” for decades.

Vera Cecelia Gustafson Palmer died on July 13, 2008 and was laid to rest in Chattanooga National Cemetery. We honor her service.