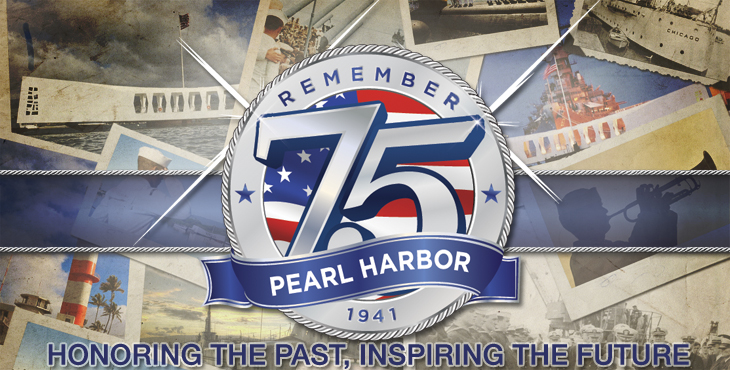 On Dec. 8, 1941, President Roosevelt declared, “Yesterday, Dec. 7, 1941— a date which will live in infamy — the United States of America was suddenly and deliberately attacked …”  He was referring, of course, to the massive attack on our Pacific Fleet at Pearl Harbor, Hawaii.

That attack left our nation stunned and shaken.  It transformed our country—ending our isolationism, awakening a mighty war machine and economic engine, marking America’s acceptance of world leadership, and reinforcing the invaluable lesson of always being prepared to defend our freedom.

Today, we honor the almost 3,600 Americans killed or wounded at Pearl Harbor 75 years ago.  And we remember America’s greatest generation—those who came forward to answer a great challenge:  16 million took up arms in the struggle, while Americans of every age and walk of life contributed to the war effort.

This anniversary reminds us not only of a solemn chapter in American history, but of the great courage and resolve demonstrated by those who answered the challenge of Pearl Harbor—qualities that have continued to define each succeeding generation of America’s Veterans—as well as the young men and women in uniform today.

We at VA honor the memory of those who gave their lives that day, as well as those who fought and survived.  Inspired by their valor and selflessness, America emerged determined to triumph in the ensuing battle against tyranny.

In the last scene of Saving Private Ryan, the aged Private Ryan, Veteran of World War II, kneels reverently before Captain Miller’s grave and says to Miller and to all Veterans, “I’ve tried to live my life the best I could. . . . I hope that, at least in your eyes, I’ve earned what all of you have done for me.”

The anniversary of Pearl Harbor is a time for all of us to reflect on the service and sacrifices of Veterans, and to ask a question:  Are we earning the freedoms and privileges Veterans secured for us all?

Today, we thank those who stood watch on Dec. 7, 1941.  We honor those who lost their lives and were wounded on that December morning.  And we salute all America’s Veterans who shared in the monumental global struggle that followed the destruction at Pearl Harbor.

As we begin the holiday season, take a moment to remember the events of Dec. 7, 1941, the heroism and valor of those who fought for our freedom yesterday and those who protect America’s most precious gift today.