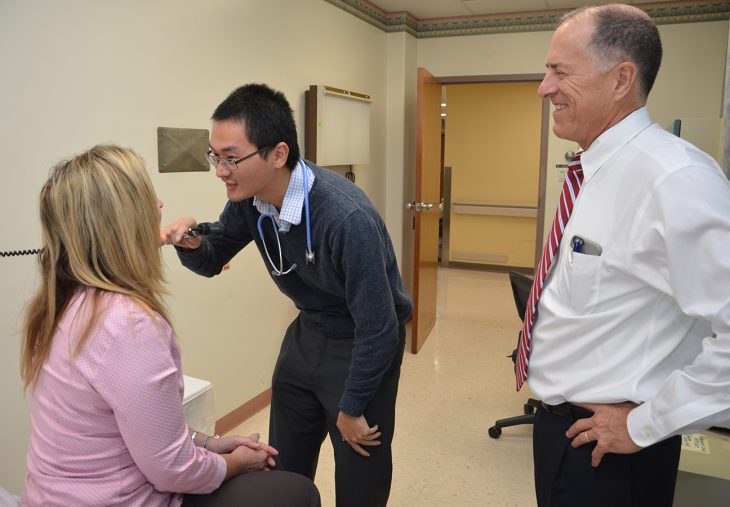 The next time you go to the James A. Haley Veterans’ Hospital Allergy and Immunology Clinic, the doctor you see may be working for free.

A group of five physicians leave their private practices to volunteer at the clinic without compensation one to two days a month to treat Veterans and to help train allergy and immunology fellows – new physicians continuing their specialty training.

The longest serving of the “Without Compensation” or WOC doctors is Hugh Windom, an allergist who makes the drive from his home and private practice in Sarasota, Florida, twice a month to work at VA’s clinic. He’s been making that same drive since he opened his practice in 1992.

For the first 20 years of his time as a WOC doc, Windom would shut down his practice, Windom Allergy, Asthma and Sinus, and make an almost 140 mile roundtrip drive to the hospital in Tampa.

“I used to close the office, but now that I have associates, the office is open so patients are being seen,” Windom said. “For about the first six or seven years I did it every week, then things (at his practice) got busy and the drive got hard, so I said every other Wednesday, the second and fourth Wednesday.”

While Windom and the other volunteer physicians see patients at the clinic, one of their primary goals in the program is to help train the newest group of doctors who are training in the allergy and immunology field. To this end, they are dual-hatted as both VA-accredited physicians and as faculty members at the University of South Florida College of Medicine.

“I remember when I was in training, it was great not just to have the same three or four of your fulltime faculty, but you get this other guy who bops in,” Windom said. “There’s a lot of different flavor that each physician brings to the table, so I come for that reason.  I‘ll ask them what their other faculty member said about a similar case so we get the chance to compare notes.  That’s the best way to go.”

While the fellows get the chance to learn from a seasoned physician, the education portion of the experience goes both ways. Windom said working with the Veterans and the fellows gives him the opportunity to learn as well.  Each morning starts with a conference to discuss cases and other items of interest in the allergy and immunology world.  From there the physicians see patients and assist the fellows with their own patients.

“There are great returns, not only the personal part – working with the fellows, working with the Veterans – but the educational part,” Windom said. “The conference kind of keeps me on my toes.  Once you leave training, if all you do is go back to your little silo and work with your nurses you might think you’re pretty smart until you realize you’re getting behind.  So it’s nice to keep up and realize you don’t know everything.”

According to Dr. Richard Lockey, director of the University of South Florida College of Medicine’s Allergy and Immunology Division, called the volunteer physicians and faculty members “altruistic” and said both the students and the patients benefit from Windom and his fellow WOC docs’ service.

“They’re excellent doctors. They’re what I call ‘doctors’ doctors,’” Lockey said.  “These are doctors that doctors go to because they know they’re the best.  They could be working in their own practice and taking care of their own patients and adding to their income, but they’re taking a day out to help us with our training program.”

“I think first and foremost he provides excellent care to the Veterans and set an example to the fellows about how to give good care,” Ledford said. “The second thing is the example it sets of service, of giving time, of asking no compensation other than the experience, and helping to take care of both Veterans and helping the next generation of doctors.  I think that example of service, to me, is an enormous message because I sometime think we don’t give enough examples to young people on the importance of giving back.”

For Windom, working with his Veteran patients has an additional meaning since his two children are currently serving.

“I have two children in the military – one’s flying for the Navy and the other is at (the U.S. Military Academy at) West Point – so it’s kind of paying it forward a little bit,” Windom said. “I’m helping the ones who’ve already served hoping that it will help my kids out someday.”