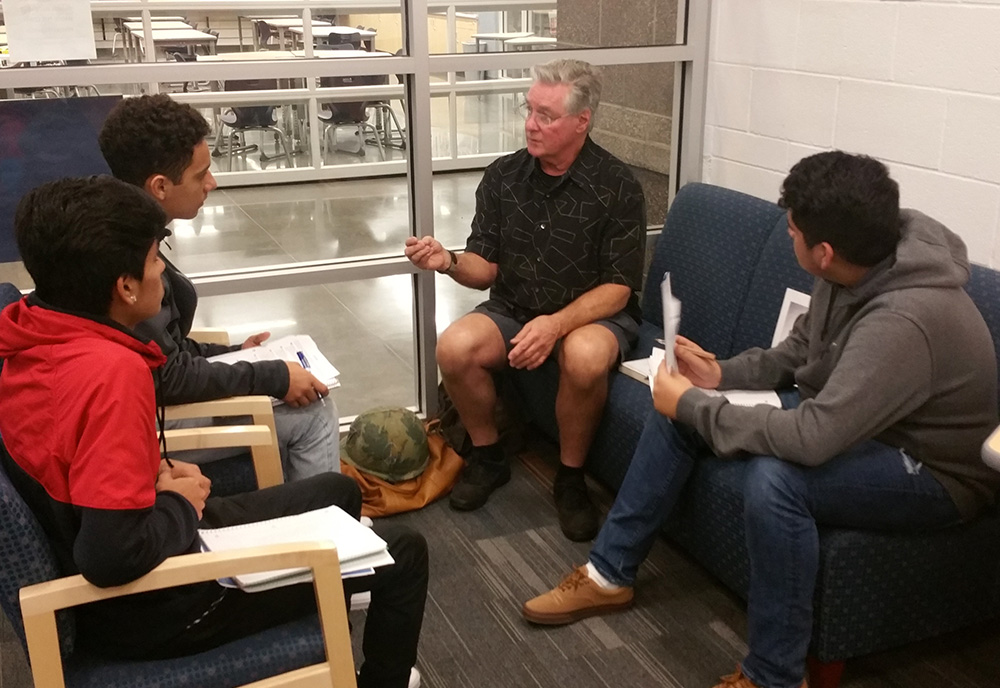 “We who have seen war never stop seeing it.”

Veterans Day has come and gone, but every day is a day for us as a nation to recognize our Veterans for their selfless service and sacrifices. And that is exactly what students at a local high school recently did as a class project.

Paul Carlin, a teacher at College Place High School, College Place, Wash., recently contacted the Walla Walla VA Medical Center for assistance in locating Vietnam Veterans willing to be interviewed by students in his English class. The students read the book “The Things They Carried” by Tim O’Brien, which has sold more than 2 million copies since 1990. Mr. O’Brien blended fact and fiction in this book to tell his story as a member of Alpha Company while serving in Vietnam.

The culmination of this project was for the students to interview Vietnam Veterans to learn about their personal stories and capture them using the national Veterans History Project resources.

The curriculum at this new high school is centered on project based learning and the goal of this project was to help them master speaking and listening skills.

“This project gives the students an opportunity to not only learn a very valuable piece of American history through a primary source – a Veteran who was there – but also gives students a chance to give back to their community,” Carlin said.

Groups of three students met initially with Veterans to review questions that would be asked during the video-taped interview. In the follow-up meeting, students recorded 30-minute interviews with their assigned Veterans.

Veterans were encouraged to talk about their early days of service, wartime service, including any particular experiences and personal reflections. All the material collected during the interview, including the video recording, is forwarded to the Veterans History Project at the Library of Congress, to be forever preserved.

The students embraced the project with enthusiasm and curiosity. Anthony Meza said he hadn’t realized how much hatred was connected to the war. After reading the book, he noted the war was much different than how he envisioned it might have been and the hatred the Veterans experienced when they returned home. Anthony learned that you have to think on your feet when at war:  a story was shared about how soldiers improvised to close a head wound when a tree branch fell on a comrade.

Anthony already had thoughts of going into the Marines and welcomes the challenge that would come with that, sharing that his grandfather served in the Army in Mexico. Although the book project didn’t particularly sway him in either direction, it did give him some insight about what happens in a war.

Peyton Ridler learned that you need to give the ultimate respect to all Veterans because you really don’t know what they may have experienced. Tierra Tonhdavong learned there are some things that words just can’t explain and memories that can’t be erased.

James Benzel said he got a good feel of how it was to be drafted, and Paul Bauman reiterated how Veterans were not accepted and couldn’t easily acclimate back into society. It was agreed by all that we now show better appreciation for those who have served.

Participating Veterans thoroughly enjoyed the opportunity to give back to the students. Many brought magazines, pictures, and other souvenirs along with them to their interviews. They shared personal experiences and eagerly answered the students’ questions. And although some had previously participated in the Veterans History Project, that didn’t stop them from wanting to be part of the project. What a great way to pass on first-hand vital historical information to the younger generation.