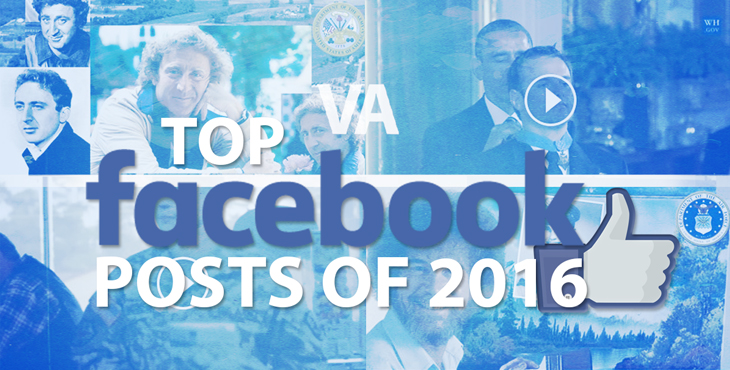 Every Veteran has a story to tell, and in 2016, VA shared many of their stories. In doing so, we hope that we have deepened your connection with the men and women who have served. From #VeteranOfTheDay posts, to articles covering Veterans’ experiences, and videos with of Medal of Honor recipients, we hope we’ve done our best to honor your stories.

As we approach 2017, please continue to share your stories with us. We are inspired by your courage and sacrifice.

Enjoy the VA’s 9 most popular Facebook posts of 2016 below:

On Feb. 3, 2016, we posted a video about United States Marine Corps combat photographer and Iwo Jima Veteran Norm T. Hatch as he shared his experience of the iconic flag raising atop Mount Suribachi. 1.3 million views

Adaptive athlete and Veteran Derek Weida told his inspiring story through a video by Inspiredmedia360 and Carey Pena TV, which we shared with our Facebook audience on Feb. 27, 2016. 2.1 million views

The fifth most viewed post was a #VeteranOfTheDay honoring Army Veteran Gene Wilder on Aug. 30, 2016. Wilder passed away on Aug. 28. 2.6 million views

This video from Airman Magazine, posted on Jan. 29, 2016, features Carlyle Harris, a prisoner of war during the Vietnam War. He is credited with introducing ‘tap code,’ a form of communication that he and his fellow brothers in arms used to relay secret messages. 2.6 million views

Our most popular Facebook post of 2016 was a video from Moments.org. Millions of you enjoyed this touching video on the bond between generations of those who have served. 10.4 million views