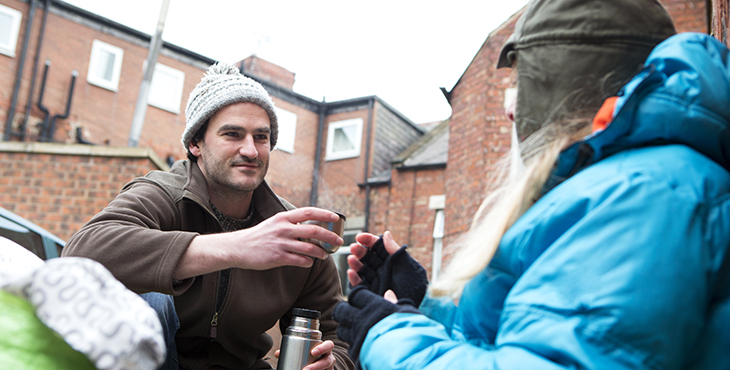 In 2009, VA announced the goal to end homelessness among Veterans. In a recent article in Veterans Affairs & Military Medicine Outlook, Craig Collins explores some of the research being conducted in VA to achieve this goal.

Homelessness disproportionately affects Veterans compared with the general U.S. population. While about seven percent of Americans are Veterans, Veterans account for 11 percent of the homeless population. To combat this problem, VA partnered with the Department of Housing and Urban Development to form the HUD-VA Supportive Housing (HUD-VASH) program. HUD-VASH has given out more than 85,000 housing vouchers to provide rental subsidy and support services to Veterans and their families, with encouraging results. Veteran homelessness declined by 36 percent from 2010 to 2015*. However, reports show that more than 47,700 Veterans were homeless as of 2015.

One particular HUD-VASH program that Collins highlights is based on the increasingly popular approach to subsidized housing called Housing First. Many U.S. and international agencies are moving to a Housing First model to address homelessness in various populations. This program provides homeless Veterans with housing vouchers unconditionally in the hope that having a place to stay will help them in other areas as well.

The traditional approach to subsidized housing has involved providing long-term housing only after homeless people meet conditions such as finding work or completing addiction and mental health treatment. Housing First flips this strategy. In providing housing without conditions, VA hopes that Veterans will have a better chance of moving forward with recovery and employment when they do not have to worry about finding permanent housing.

“Housing First is a major change of clinical philosophy and a giant logistic change at the same time,” said Stefan Kertesz, M.D., of the Birmingham VA Medical Center. “The clinical philosophy takes housing and treats it as a human right instead of a reward for doing well.”

Housing First involves more than just providing a place to stay. The program also includes case management by a social worker and referrals for health and social services. So far, Housing First has been successful: studies show that this approach leads to better long-term housing outcomes, as well as better health care outcomes.

Implementing this program is not without its difficulties, however. Housing First requires VA caseworkers to deal with logistical problems involving real estate, bills, and material needs such as clothing and furniture in addition to resolving clinical and psychological issues. These extra responsibilities have led to some turnover or burnout of social workers working in VA. As Kertesz explains, Housing First requires a collaborative effort across VA among social workers, VA leadership, vehicle fleets, information technology people, mental health services, emergency departments and many others.

VA is conducting ongoing studies to figure out how to best implement this program VA-wide. Some of the difficulties found so far involve variations in the way Housing First is being implemented across different VA medical centers, and concerns about competing responsibilities getting in the way of social workers’ case-management duties.

In his article, Collins goes on to discuss a few other examples of how VA researchers are working to end homelessness. He ends his article by pointing out that changing how the largest health care system in the country delivers services to tens of thousands of Veterans is a “colossal undertaking.” But as VA expands these and other programs to understand Veteran homelessness and find workable solutions, there is reason to hope that the rate of this problem among Veterans will continue to decline.

For more on VA’s efforts to end Veteran homelessness you can read the Veterans Affairs & Military Medicine Outlook article here.

About the author: Tristan Horrom is a writer-editor with VA Research Communications and with VA’s Journal of Rehabilitation Research and Development.