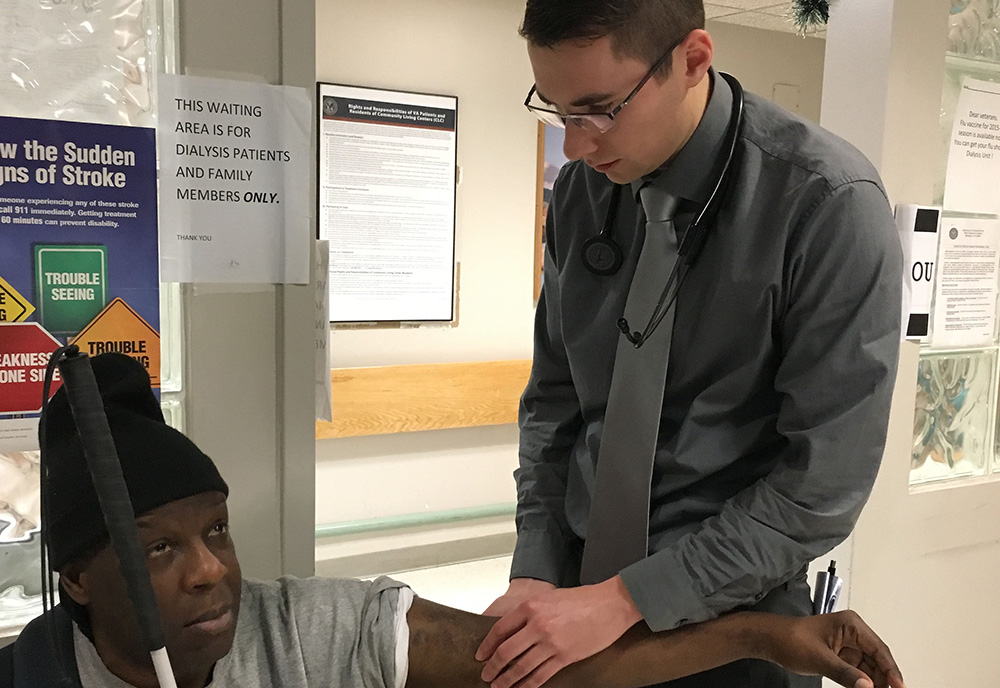 “I want to keep my independence.  I may have to do some things differently, but that doesn’t mean I can’t do them.”  The bottom line for Army Veteran French Scott, Jr. is that he masters the physical challenges that come his way and enjoys life.

Scott has been managing diabetes-related blindness since 2007.  Until very recently, he was also dealing with kidney disease that put him on dialysis beginning in October 2009.  But very good things happen.  And, on the advice of Dr. David Goldfarb, Chief Nephrology,  Dr. Aleksey Etinger, Nephrology Fellow  and Irina Presler, Nurse Practitioner and transplant coordinator, Scott decided to have a kidney transplant.

“Let’s go for it. We have nothing else to do.  It’s a risk.  Listen, you get a chance and something can always go wrong.  But, you’ve got to take that opportunity,” says Scott about how he responded to the transplant option.

All this involved several doctors, and many nurses at VA’s Manhattan Campus as well as a large clinical staff at VA Pittsburgh, the VA Regional Center where Scott’s transplant was performed. Scott is grateful and appreciative of everyone who has helped and encouraged him.  Kathleen Holland-Deconcilio, R.N., PCTC Dialysis and Chemo, praised the commitment of Ms.  Presler, and the medical and nursing teams who encourage dialysis patients to go on the transplant list.

“At VA NY Harbor, we do all the required screening and work-up here for transplantation. The medical records are then sent to Pittsburgh for evaluation and their approval.  Once approved, the patient and his support person are sent to Pittsburgh for the interview and to be informed of the entire procedure for transplant.  It is truly a team effort by the Nurse Practitioner, Registered Nurse, and Social Worker coordinating his dialysis schedule, the transportation arrangement and other details, that made it possible for Mr. Scott to go to Pittsburgh for his transplant.   Mr. Scott is doing terrific.   We love seeing him. He is such a wonderful, caring person.”

Ms. Holland-Deconcilio added that kidney transplants are now performed at James J. Peters VAMC in the Bronx.  “This will make it easier for the patients and their families to be close by when our Veterans have their transplant.”

Using Assistive Devices for the Blind

Born and raised in Patterson, N.J., Scott enlisted in the Army after graduating East Side High School, and served for three years as a Personnel Administration Clerk at Fort Hood. After honorable discharge, he first worked as a health claims examiner and later for Sunoco as a shift manager.  He had to stop working when he became blind first in his right eye and then his left.

Scott uses a white cane.  He says the clinical staff in the VIST program (Visual Impairment Services Team) in Manhattan and at Eastern Blind Rehabilitation Center (West Haven VA Healthcare System) have been extremely supportive, helping him obtain assistive devices for the blind and supporting the use of this technology and implementing organizational approaches to daily living.  He uses a Script Talk medication reader, for example, that reads out the information printed on the labels of VA issued medication when it is scanned.

Blindness and the need for dialysis never kept Scott at home.  “I’m up and out by 11,” he says.  In recent years, he’s traveled to see family, friends and sometimes “a friendly friend.” He’s taken trips in recent years to Chicago, North Carolina, Virginia and Florida.  Asked what he has been doing about dialysis during these trips he said, “I just go to another VA or a dialysis center.”  During Hurricane Sandy, Scott was one of many VA dialysis patients, who transitioned seamlessly to alternate dialysis centers because Dr. Goldfarb and his team were committed to ensuring no interruption of treatment.

“Sit on my behind with a blue drink”

Dialysis is in the past now. Scott had his kidney transplant two months ago on October 20, 2016.  Like all transplant patients he needs to take many medications.  He’s encouraged that he’s already been able to drop two prescriptions from a long list.  “Basically, I take medicine from 8 a.m. to 10 p.m.”

Scott intends to go to the Bahamas this March.  “I want to go because I’ve never been there.  I want to sit on my behind at the beach with a blue drink in my hand.” After he returns, Scott plans to visit “his people” in North Carolina.  “My next trip will be to Vegas,” he says, “A poker card is calling my name.”

Holland-Deconcilio also mentioned the need for organ donors is constant.

“Are you a donor?” she asks.  “Does your driver’s license state you are a donor, have you spoken to your family about your wishes?    Let’s make someone’s wish come true.”