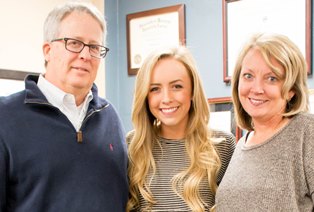 Katie Gardner had no idea why she was summoned to the director’s office at Veterans Health Care System of the Ozarks (VHSO) last month, but she would soon find out she was chosen for James H. Parke Memorial Scholarship – a value of $20,000.

Gardner, a senior at Fayetteville High School, has volunteered at VHSO officially since she was 14, but in reality her service to Veterans began much earlier. When she was nine years old, Gardner participated in a class project making lap robes for Veterans called “Warming the Hearts of Veterans.” She and her classmates made the lap robes and presented them to the VA Voluntary Service (VAVS) executive committee president, who accepted them on behalf of VHSO Veterans.

James Parke Memorial Scholarship winner Katie Gardner with her parents in the director’s office shortly after being told she had won the scholarship.

“I cannot imagine my life without this experience getting to know some of America’s greatest heroes,” Gardner shared. “Volunteering at the Veterans hospital has brought me a glimpse into the hearts of those who do not just want to  make a difference, but instead they have a sincere longing to do so. This has shown me the perfect example of servant leadership.”

Gardner has served in numerous roles as a teen volunteer including: escort, taking vital signs, selling popcorn, clerical duties, serving coffee, data collection and ambassador/greeter. She has also been an active participant for the past six years at the National Salute to Veteran Patients.

“I truly hope my choices, actions, and decisions honor them and show them my gratitude for what they have done. I think it is very important my generation understand the freedom we have today is because of the sacrifices our Veterans are willing to make for us,” Gardner said.  “And it is because of them, that we have the freedom and the abilities to pursue our goals and dreams.”

Katie also lends her time to the state Veterans home, and has spent countless hours at the Fayetteville National Cemetery participating in Wreaths Across America, putting out flags for Memorial Day, co-chairing the volunteer appreciation lunch for three years, and in various other capacities. In addition, she has also reached more than 10,000 students and adults to educate on the importance of serving Veterans and volunteering.

The James H. Parke Memorial Scholarship was named after the first director of VA’s Voluntary Service. Organizations, volunteers, VA staff and others contribute to the fund, which was established in 1976 to serve as a non-profit source of funds for the scholarship. Each medical center may nominate one student volunteer for the award. One student is selected based on a number of criteria, including scholastic activity, leadership capability and inspiration to patients through service performed.

Gardner plans to attend the University of Arkansas in the fall.

About the author: Wanda Shull, is a public affairs officer for the Veterans Health Care System of the Ozarks.