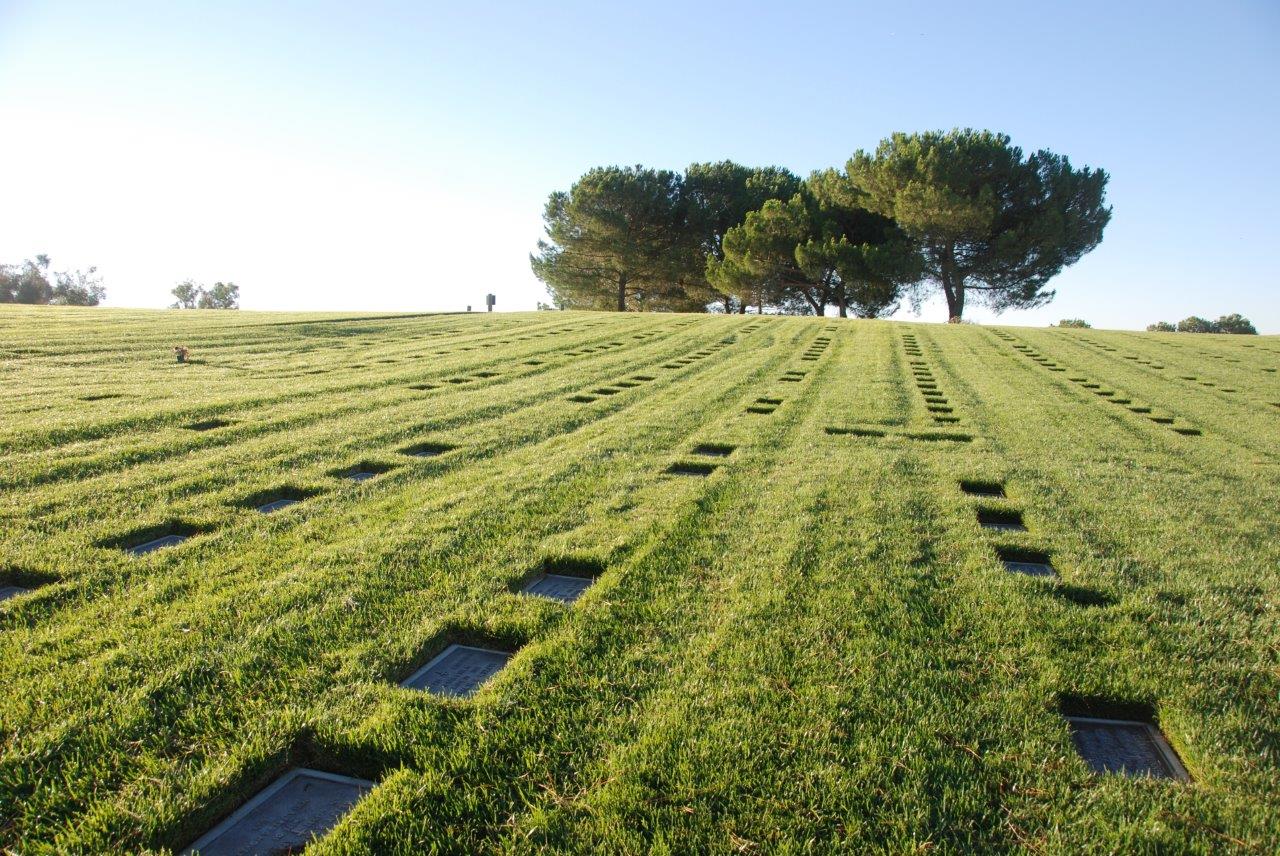 Today, she shares an uncommon series of events that happened recently at Riverside National Cemetery.

Llaneza is the cemetery foreman at Riverside, and like all the professionals at VA’s national cemeteries, he executes his duties out of a deep sense of honoring those interred there and serving their families. What Greta shares about Llaneza goes beyond: he honored the Veteran’s legacy of Thomas Naud. And the incredible story that unfolded from his devoted execution of duties is truly unique, with an exceptional ending.

The office of Edgar Llaneza Riverside National Cemetery’s Facilities Foreman is a terrific place to stop off while making the rounds at the cemetery. Its welcoming environment is a great spot for interesting conversation, a cup of coffee, tea or cocoa dispensed from his fancy Keurig beverage dispenser. The mementos that dot his office are always the center of some stimulating discussion. On a recent visit I noticed a new item among his possessions; a picture of arguably one of the greatest college basketball coaches who ever lived: John Wooden and his father. Although I grew up in North Carolina – Tar Heel Country, and Dean Smith and his Tar heels ruled Atlantic Coast Conference basketball from the Dean Dome – a certain deference was always given to the “Wizard of Westwood,” John Wooden of UCLA.

The picture was of an advertisement for a John Wooden seminar, extolling the virtues of good character and the value of honesty. I was curious to know how he came across the item, since Coach Wooden had been gone a number of years. He explained, “I like items like this, I use them to motivate and teach my people.” He asked if I wanted to know how he acquired the flyer, and he told me I was not going to believe it. The son of a Veteran whom we had recently interred gave him the flyer. Edgar proceeded to tell me a story of a wonderful chance meeting with surprising coincidences that forged a lasting bond between the Foreman and the family of Corporal Thomas Naud.

As Facilities Foreman, Edgar’s job takes him all over the cemetery. In October, he was inspecting equipment out in the cemetery and noticed a gentlemen standing at the curb with a map. He looked puzzled. All NCA employees are taught that if a visitor looks like they need help, offer assistance. The gentleman explained to Edgar his father, Thomas Naud was going to be buried at Riverside National Cemetery (RNC) and he wanted to see where his final resting place would be. During the course of their brief conversation the gentleman became overwhelmed with emotion as he continued to talk about his father. Edgar sensed that the gentlemen wanted to talk about his father, so he lingered a while longer.

He explained to Edgar “You know my Dad was a Hero … Bronze Star, Purple Heart. We were writing a book together about successful people.” John Wooden was one the people that he had interviewed. Now that his Father was gone he was not sure he could finish the work. Edgar explained to me that the gentleman was indeed “quite famous.” In addition to the Wooden flyer, the gentlemen later mailed Edgar his father’s biography and a pictorial card, about the size of a postcard that outlined the 90 year old Veteran’s life. It is kind of card frequently distributed at a funeral to give one an idea of the departed’s life story. The included in the among the pictures was a young very attractive smiling couple possibly on their honeymoon with a caption “Married 62 years” another picture showed a young reporter interviewing President Harry Truman; and probably one of the cutest pictures ever, five beautiful kids with the caption: “Beloved Children,”and a picture was of the 90 year old Thomas Naud which simply read, “Lover of God Age 90.” Printed on the backside of the card was the 23rd Psalm, a youthful Private Naud posing proudly in uniform and a picture of his grandchildren and the words “ Proud Grandfather.”

Funeral Card for CPL Thomas Naud, made by his family

Reading Mr. Thomas Naud’s bio and viewing the card, it was obvious this Veteran was every bit the hero. The recipient of two medals of valor for his WWII service in the European Theater, he also enjoyed a successful career in television and film. Corporal Naud’s biography was impressive. He was one of the youngest reporters on the original NBC’s “Today Show with Dave Garroway,” the show’s founding host and anchor. As a young producer and team member on the “Today Show,” Mr. Naud was perhaps best known as “The Man on the Street” opposite Garroway. While with the “Today Show,” Mr. Naud interviewed on live television everyone from President Truman, Marilyn Monroe to Rocky Marciano at ringside. Later he produced television shows for the three major networks, including “The Today Show,” “The Tonight Show,” “The Jonathan Winter’s Show,” “The Pat Boone Show” and hundreds of live musical variety shows. He also wrote and produced Columbia Pictures baseball comedy “Safe at Home,” starring two future Baseball Hall of Famers, Mickey Mantle and Roger Maris. Interestingly enough, Mr. Naud’s occupation before entering the service was listed as a baseball player.

Over the next several years, he created and put on the air over 22 original variety and game shows and for the major networks, including CBS-TV’s “It’s Your Bet” and ABC-TV’s “The Girl In My Life.” In the late seventies, Mr. Naud purchased and developed proprietary Introvision Film Production Technology. Robert Osborne of The Hollywood Reporter, and host for Turner Classic Movies described Mr. Naud’s breakthrough invention Introvision as “the most important development since the advent of sound and color.” Essentially, still photographs, or real time moving picture images, can be turned into three dimensional, realistic looking sets and settings. In 1985, Mr. Naud’s Introvision company received television’s highest honor, an Emmy, and for their visual work on Hallmark-TVs children’s production of “The Hugga Bunch.” He also received an Academy Award in 1988 (an Oscar), from the Academy of Motion Picture Arts and Sciences for his Introvison technology utilized on HBO-TV’s “Inside the Third Reich” and Warner Brothers’ “The Fugitive,” starring Harrison Ford.

Funeral card for CPL Naud, second side. Made by his family.

I could see why it was important to his son that we knew who we were burying. During the course of their conversation he asked Edgar if could he select his Father’s gravesite of if what about a “Twenty- one gun” salute and a flyover were possible? In typical great customer service style Edgar explained scheduling these type things really did not fall into his department, but our Administration Office would be able to assist him and would help him with setting up Military Honors. He also explained that for first interments gravesites were assigned as the need arose. He could not confirm the gravesite, although section in front of where they were standing would be where his father would be buried. Edgar assured him that “Taps” and a presentation of the flag to the next of kin would occur. Edgar explained that the rifle salute was not something he could guarantee, but we would do what we could to make it happen. The two gentlemen parted; with a promise from Edgar he would attend Mr. Naud’s committal service. True to his word on the appointed day, Edgar attended the service.

A few days later as Edgar arrived for the committal service. Just like clockwork, the Riverside National Cemetery Memorial Honor Detail filed off the bus and marched with military precision to the committal shelter and assumed their place on the firing line, ready to render a rifle salute to Corporal Thomas Naud. During the service, as if prearranged and on cue, approaching from the snow-capped San Jacinto Mountain range, flew a lone F-16 Fighting Falcon, giving Corporal Naud his flyover. Knowing how close the family was to their Dad, Edgar realized how special it would be for the family to witness their father’s interment. He asked the cemetery representative, Terry Cole, if it would possible for the family to witness their Father’s burial. Terry said, “Sure Edgar, Let me check with interments and see if they can accommodate the family.”

As Edgar stood on the curb with the family who was watching their father’s burial. The son remarked “This is great. We wanted a gravesite close to the curb.” Edgar said. “The family was thrilled.” They thought I made all this happened. Really, I didn’t do a lot.” I assured Edgar, “Yes, you did.” Just his presence alone was important; when the son needed to talk, Edgar listened, he gave him helpful information, and he showed up as promised. Also, RNC learned something about Mr. Thomas Naud that we would not have readily known. Edgar brought everything together. But the flyover, I assured him, was something he could not take credit for. It was divine intervention or serendipity.