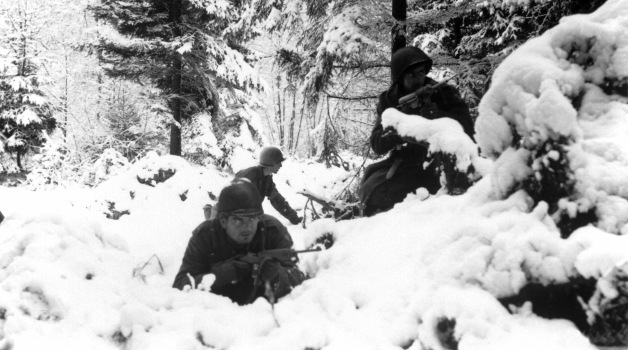 On December 16, 1944, the Germans launched what is considered their last major offensive of World War II. Just shortly after the Allied force’s successfully invaded Normandy, France, the surprise attack from Hitler’s forces caught them off guard. The battle lasted until January 25, 1945. The United States suffered 19,000 fatalities and more than 89,000 casualties.

In commemoration of the 72nd anniversary of this historic battle of courage and fortitude, we invite you to meet Army Veteran Harry Miller.

Harry served in the Army from 1944 – 1953 during World War II. He first served as a member of a tank crew, then transitioned to a messenger center clerk. He fought in the Battle of the Bulge.

During the battle, the 1st Army Headquarters instructed the tank crews to go down to an ordnance depot and take whatever they needed for the tanks. “We had to take good parts off of one tank and put it on another. We finally got three tanks and a tank destroyer that would operate and run, and had a gun,” he said in an interview with VA. They took the three working tanks and sent them to their C Company. Those three tanks ended up taking out three German tanks, which ended up being members of the 1st SS Panzer Division Leibstandarte SS Adolf Hitlerbeing, Hitler’s old body guards.

After World War II, Harry went on to serve in Korea and Vietnam and served enlistments in both the Army and the Air Force.

Listen to the audio below for Harry’s full account of his service before, during, and shortly after the Battle of Bulge.