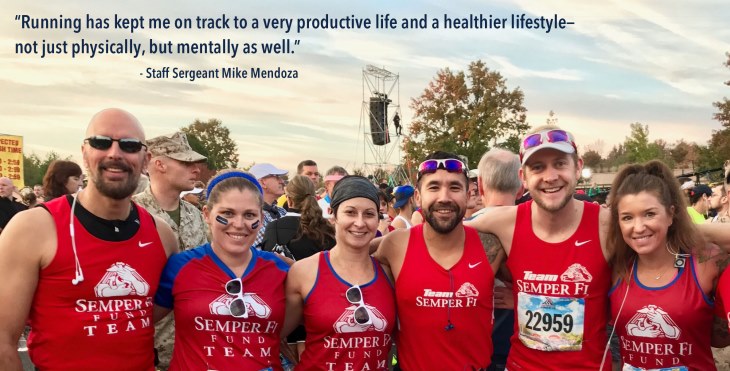 As a naval medical officer with nearly two decades of operational mental health experience, I’m often asked: “What can I start doing today to help my mental situation get better?”

In this time of what is referred to as “patient-centered care,” the answer to that question is unique for every individual:  What works for you may not work for someone else. While medicines most certainly have their place, I’m here to give you one word of advice that, according to both my own experience and wide-ranging research in the field, has shown to provide positive benefit to almost everyone:  Exercise.

Exercising with others is a great motivator. Semper Fi Fund offers a recreational, team-based, sport program called Team Semper Fi for injured servicemen and women who use sport as a rehabilitative tool on their road to recovery.  The motivation, inspiration and camaraderie that Team Semper Fi offers is truly extraordinary.

Whether that physical activity takes place as part of a team or as an individual in a gym, out on the hiking trail (with the added therapeutic benefit of nature) or in your own backyard, exercise simply means increased physical activity. The benefits you’re likely to see from increasing your activity by as little as thirty minutes a day three days a week make the effort very worthwhile. These include:

You feel much better after a good night’s sleep than you do after a restless night’s sleep, right? That’s hardly a surprise: Sleep is the body’s way of recharging itself — not just physically, but also mentally.

When you exercise, you’re increasing your body’s temperature; the drop in temperature after exercising is a signal to the body to get some sleep. A recent study by the National Sleep Foundation found that “people sleep significantly better and feel more alert during the day if they get at least 150 minutes of exercise a week.”

The health benefits of exercise are particularly notable for Veterans who suffer from post-traumatic stress. Research has shown that focusing one’s mind on the physical activity at hand, whether it’s walking, hiking, swimming, seated cardio or whatever it may be, can help reduce the immobilization stress response familiar to anyone suffering from PTSD.

Of course, there are many more benefits to exercise that I don’t have space to comment on here, for example: Improved self-confidence. A sharper memory. Better control over addictive impulses. A force multiplier for therapeutic efforts. Increased energy and stamina. An improved overall mood.

So, get out there and get moving — you have nothing to lose but those negative thoughts — and maybe a few less sleepless nights, too!

Navy Capt. Robert Koffman, M.D., was the senior consultant for Integrative Medicine & Behavioral Health at the National Intrepid Center of Excellence in Bethesda, Maryland. With more than three decades of active service and two decades of boots-on-the-ground operational experience as a naval medical officer, Koffman serves as medical director for the Semper Fi Fund.