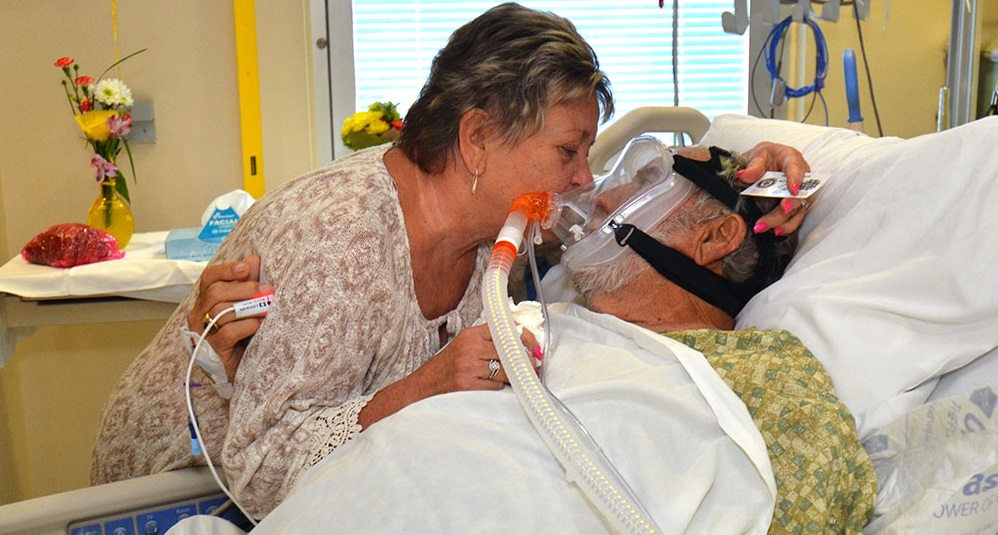 The following guest post was submitted to VAntage Point by Ed Drohan a Public Affairs Specialist.

The groom needed help slipping the ring on his bride’s finger, and their first kiss was through an oxygen mask.

The couple had originally planned to be married June 17, but 75-year-old Homer fell ill about two weeks ago and was admitted to the hospital.  His condition worsened to the point that doctors told the family he would probably not live more than a few more days, so the couple decided to move up the wedding and hold it in the hospital.

In less than 24 hours hospital staff members came together to ensure the day would be a memorable one for the pair.  Jane said her first hurdle was getting the marriage license from Hillsborough County since both she and Homer would normally need to apply in person, but with the help of Social Worker Christine Edmond she was able to get it.

“Because Homer wasn’t able to be there, I had to have a letter from the doctor saying he wasn’t able to get out of his bed,” Jane said.  “The social worker did the letter and the doctor signed it, and then I took it up there.  I had to write a note to the judge saying it was important to us to get married and that it was probably not a good idea to wait too long.  They OK’d it and I came back here and the wedding happened.”

“We wanted to make sure this was special for them.”

Nurse Anitha Mathew and acting nurse manager Audriana Pevec also rallied their staff around the couple to ensure their wedding was a memorable one.

“We started getting the wheels rolling to see what we could do for this Veteran,” Pevec said.  “I think this was a special moment and we wanted to do what we could to make sure this was special for them.”

Pevec discovered nobody could recall a wedding like this ever taking place at the Tampa VA hospital.  She coordinated with Staff Chaplain Dennis Mathai to ensure the couple’s minister was cleared to perform the ceremony in the hospital, and even helped arrange for a wedding cake for the ceremony.

“Our nurse manager called me and said there was going to be a wedding today, so I quickly called the people in the kitchen who make things happen and, and magically, we had a wedding cake,” said Registered Dietician Lynn Hiller.  “I think this is wonderful.  I’m happy we were able to be here for them.  It is a privilege to be here for them.”

Jane and Homer Johnson hold hands at his bedside after their wedding ceremony at the James A. Haley Veterans’ Hospital Medical Intensive Care Unit March 2.

The staff also purchased flowers for the bride, decorations and balloons to brighten up the hospital room, a cake knife that commemorates their special day, and a card filled with congratulations from everyone on the staff.

“It all just kind of came together,” Prevec said.  “It was really nice to see everyone help. I think it’s one of the least things we can do.  It really is an honor.”

While Homer had trouble speaking because of his medical problems, he was able to express his appreciation to everyone involved not only in the wedding, but in the care he’s received since being admitted to the hospital two weeks ago.  His new bride felt the same way.

“I’m thankful for all the support,” Jane said.  “You can’t do this without them, without the support of the staff and the people around you.  It’s like having a whole hospital of family.”

Homer Johnson passed away with his wife by his side March 4.