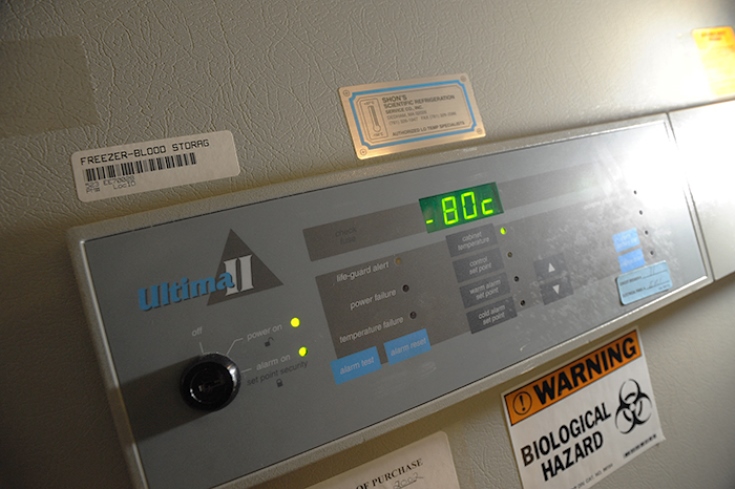 VA is leading the way in genomic medicine, the study of DNA to learn about health and diseases. The Million Veteran Program (MVP) is VA’s ambitious initiative to advance genomic research. Journalist Craig Collins explored MVP in the current issue of Veterans Affairs & Military Medicine Outlook.

Genomic studies often involve looking for similar genes in a particular group—for example people with diabetes—to try to find DNA traits related to the disease being studied. But these studies have an inherent problem. They require large numbers of genetic samples for comparison, which are hard to come by. That’s where MVP comes in.

Well over 550,000 Veterans have enrolled in MVP as of early spring 2017. It is now the world’s largest genomic database tied to a health care system. VA predicts that a million Veterans will be enrolled by 2020. Volunteers give blood samples, which are stored at the Massachusetts Veterans Epidemiology Research and Information Center in Boston. The samples are coded so that researchers are blinded to the volunteers’ identities.

As Collins explains, VA is an ideal venue for genomics research. It is the nation’s largest integrated health care system. It uses one of the world’s most sophisticated electronic medical record systems. And many of its researchers also work at some of the best research universities in the world. VA is in a unique position to take advantage of its existing systems and large patient population, about 8.8 million Veterans, to make MVP a success.

According to Dr. Sumitra Muralidhar, program director of MVP, the initiative offers an opportunity to revolutionize the way medicine is practiced. As Muralidhar explains, researchers can use the large number of MVP volunteers and VA’s electronic records to “better pinpoint the causes of [a disease], genetic as well as lifestyle and environmental factors. You can include all these in a study.”

The ways the MVP genetic repository can be used by researchers are still evolving. Working with such vast amounts of data takes a lot of computing power. Researchers access the anonymous MVP data through a computer network called the Genomic Information System for Integrative Science (GenISIS). Right now, 25 to 50 researchers may be accessing the system at the same time. As the system continues to develop, Muralidhar and her team hope to enable hundreds or even thousands of researchers to work with GenISIS simultaneously.

VA is forming partnerships with other organizations to expand MVP. VA and the Department of Defense have signed an agreement to open up enrollment to active-duty service members as well as Veterans. This will likely expand the database to include younger participants, allowing for more comparison between different demographics.

VA and the National Institutes of Health have an agreement that will invite MVP participants to enroll in NIH’s Precision Medicine Initiative. MVP also has an important role in the National Cancer Moonshot initiative, which aims to use precision medicine and genomics to find a cure for cancer.

To facilitate these projects, VA and the Department of Energy are working together to use the expertise and large supercomputing capacity of that agency’s labs. Using these supercomputers will allow MVP researchers to analyze data on a scale not currently possible.

VA researchers are already taking advantage of the data available while MVP continues to gather volunteers. Large studies on PTSD, substance abuse, obesity, and many other topics are underway using MVP data.

According to Muralidhar, MVP has the potential to optimize treatments for a variety of diseases, or maybe to prevent them entirely. As she points out, many Veterans are eager to volunteer to make this monumental undertaking possible: “They served their country once, and they look at this as a second opportunity to serve.”

You can read Collins’ full article by clicking here.

If you are a Veteran interested in participating in MVP, visit http://www.research.va.gov/mvp/ or call toll-free at 866-441-6075 to learn how to enroll. Find out more on VA genomic research from the VA Research Genomics topic page.

About the author: Tristan Horrom is a writer-editor with VA’s Journal of Rehabilitation Research and Development and with VA Research Communications.