From the street to the mountain, Veteran credits VA programs for newfound freedom 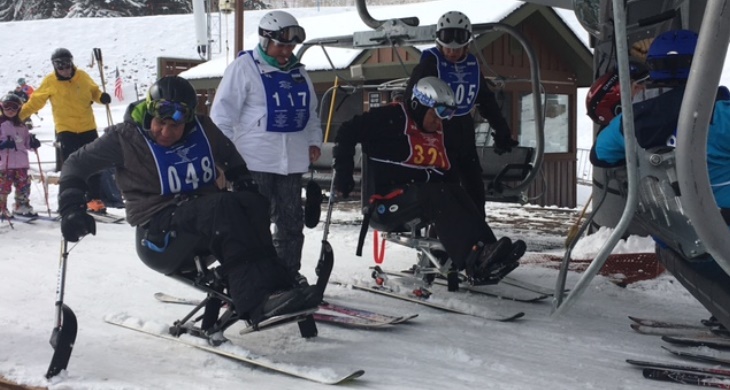 There was a time Air Force Veteran Miguel Davis-Dacio of the Bronx, New York, found himself as a homeless Veteran begging for help. Tuesday at the National Disabled Veterans Winter Sports Clinic, he found himself on the bottom of a ski slope for the first time, begging to do it again.

“I have found being in movement has been helpful in my recovery, giving me a sense of freedom I haven’t had before,” he says. “This is my first time skiing, but I’ve been involved with different programs taking care of horses, singing in choral groups, participating in the goal ball.”

Davis-Dacio credits his athletic ability to feel confident skiing with a visual impairment. “It affects your sense of depth, balance and distance, and I make small misjudgments but the guides have given me good feedback and I feel I’m in good hands.”

Ski instructor Randy Benson of Los Angeles guided Davis-Dacio down the mountain and said his first time could not have gone better. “Check out that smile, I think that says it all,” he said.

Benson, a military reservist, says he has returned year after year to volunteer helping Veterans like Davis-Dacio realize their strengths and says no matter how many years he has volunteered, he feels he gets more out of the experience than the Veterans do. He focuses on teaching safety first, and “then the fun will follow.”

Air Force Veteran Miguel Davis-Dacio takes a moment after downhill skiing to chat new strategies with his ski instructor Randy Benson of Los Angeles after his first trip down the mountain.

Visually impaired participants are taken up on the mountain where it was quiet and given instruction on how best to approach the mountain. “Left! Ok, right!” instructors called out directing the lesson to ensure safety on the way down. Many visually-impaired skiers are followed by guides to ensure they feel supported and at ease.

Cara Reed, a recreational therapist from the Dallas VA Medical Center and team leader of Davis-Dacio’s group says the key to success on the slopes is faith, determination and confidence.

“It’s phenomenal to see them enjoy these new experiences and take that win back to their lives,” she said. “When they make it down that mountain, they all start to believe that if they can achieve that, they can do anything.”

Davis-Dacio smiles wide and acknowledges he is grateful for the place he is in now. He once had traumatic experiences he didn’t address and 30 years later, he found his life falling apart.

“I was angry for a long time,” he reveals, “but I realized I didn’t take responsibility for my trauma. It took me a long time to get back to this place after being homeless in New York, but it was a blessing in that I was eventually in residence with Vietnam Veterans who had similar trauma. And because of that, I realized addressing that stuff I dismissed was part of the journey I needed to take. Your trauma is never completely gone, but I’ve learned to be honest and take responsibility. I am doing that now.”

Kara Fort joined VA as a contractor in 2016. She is the granddaughter, daughter and sister of Navy Veterans. She works for HMS TECHNOLOGIES, INC a service-disabled, Veteran-owned small business based in Martinsburg, West Virginia, and gold sponsor of the event.