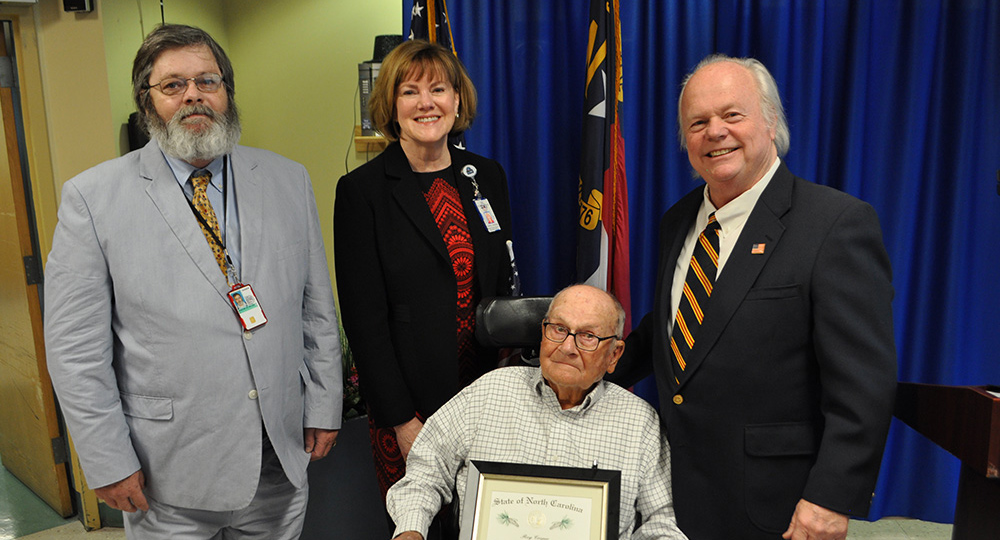 This Sunday, April 9, will be the 75th anniversary of the Bataan Death March, which claimed the lives of thousands of American and Filipino soldiers in World War II. Army Veteran Wayne Carringer, one of the survivors, will be honored at a ceremony this Sunday at the Charles George VA Medical Center in Asheville, N.C., where he is a resident of the Community Living Center.

Carringer was only 17 when he enlisted in 1939, although he told the Army he was 19. He was sent to the Philippines and after Pearl Harbor was bombed, he was sent to Bataan.  On April 9, 1942, Bataan was taken over by the Japanese.

American and Filipino soldiers fought bravely with equipment and weapons left over from World War I. Bataan had no anti-aircraft batteries. Carringer became a prisoner of (POW) , surviving the brutal 60-mile Bataan Death March.

“Thank God for giving me the courage and strength.”

He spent an entire year at Camp O’Donnell, which he recalls as a death factory.  A number of Japanese officers involved in the march and POW camp were later tried for war crimes and executed or imprisoned.

At the end of the year, Carringer was loaded onto a ship and taken to work in the Mitsubishi coal mines, working up to ten hours a day and receiving only a bowl of rice and cabbage leaf soup twice a day.

“The POWs worked in groups of 10″, he remembers. “The guards told us that if one tried to escape, the other nine would die.” He was a Prisoner of War for more than three years.

Carringer, a staff sergeant, separated from service in 1946.  He says, “I thank God for giving me the courage and strength to endure the torture, the beatings and the humiliation to come home to the greatest country in the world.”

In the photo above, Carringer is awarded the “Order of the Long Leaf Pine,” one of the most prestigious awards conferred by the Governor of North Carolina. The award is given to individuals who have served others in a manner that their actions have positively impacted the community around them and the State of North Carolina.

At the 75th Anniversary event, participants will gather in the medical center atrium to commemorate the sacrifice of thousands of American and allied Servicemembers who lost their lives in the Bataan Death March or endured years of brutal treatment as Prisoners of War.

Cynthia Breyfogle, Medical Center Director: “While we may not be able to fully comprehend the extreme hardships, sacrifices and uncertainties that our allied soldiers endured during this difficult time, we can honor both the survivors and deceased by showing out appreciation for all Veterans – past, present and future – and by keeping our commitment in serving them just as they have served our country.”

About the author: Armenthis Lester is the Public Affairs Officer at the Asheville, NC Veterans Affairs Medical Center