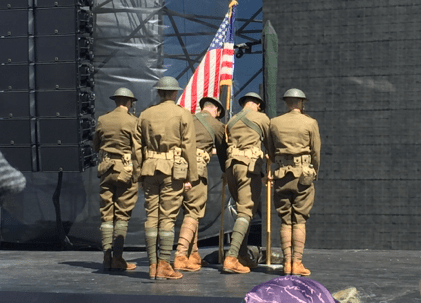 The United States entered The Great War 100 years ago this month, and Americans in uniform changed the world forever. This decision by President Wilson and the Congress on April 6, 1917 not only changed the outcome of World War I, but it changed this nation. This April, many around the US are reflecting on that. Many from around the world are, too.

On April 6, 2017 in Kansas City, MO, dignitaries from 35 nations as well as general and flag officers from many of them, joined American colleagues in uniform and in public service to commemorate that day in front of the 4,000 citizens of the home state of John Pershing, General of the Armies and the commander of US forces in WWI.

The World War I Centennial Commission was established by President Obama in 2013 to prepare for this event, and more like it in the next year. The Commission chose to hold this commemoration, called In Sacrifice for Liberty and Peace, at the National World War One Museum & Memorial; the setting was perfectly fitting.

The Department of Veterans Affairs was represented by a small delegation, seated in the middle of French Senators, Assemblymen, and several generals. There were similar delegations from the Netherlands, Belgium, Italy, Canada, Australia, and United Kingdom, as well as ambassadors and diplomats from dozens of other nations, such as Austria and Hungary.

All to honor the sacrifice of American Veterans.

I’ve taught and researched history for the better part of my adult life, and I am an Army Veteran. But at no point in my career has the global impact of the American servicemember ever been made so clear to me as in this ceremony. There are no WWI Veterans alive anymore, yet what they did has defined the word we live in today, and representatives of much of that world came to Kansas City to show that.

It was then that the teacher in me worked to find a single example that I would use in the classroom: something to show how far-reaching was the answer to the call of service, how idealistic many soldiers, sailors, and Marines were, and how their service not only changed the world, but also America.

Mrs. Rose Volkman and Mr. William Volkman lived in Hawaii, 11,000 miles from Flanders Field, halfway around the world. But they volunteered. Territorial Hawaii (Hawaii before its statehood) was sparsely populated, compared to today. Yet, so far from Pres. Wilson’s rousing speech to Congress, the Volkmans still heard the call to serve.

Mr. Volkman would complete his service as a Lieutenant Commander in the US Navy. For Mrs. Volkman, the experience was different. Rose Volkman served as a Yeoman (F), female yeomen were often called “yeomanettes”: the first category of military service in which women could enlist and serve with equal rank, pay, and promotion potential as male servicemen. There was no opportunity for Rose to earn a commission like her husband, but the honor to serve was enough.

World War I was a war for democracy and liberty. The doughboys believed that is what they were fighting for in Europe. The Yeomen (F) were serving selflessly stateside “to free a sailor for the fleet” but also to demonstrate what a woman’s place in modern society can be. Their war was also for democracy and liberty. When women’s suffrage came in 1920, the influence of the Yeomen (F) certainly contributed.

But resultant ideologies were not the principal motivators for the Volkmans. They simply volunteered when their country called, like millions others. Their service had an impact on democracy’s place in Europe and the world, and it changed America.