Home / Top Stories / This 4th of July is Different

This 4th of July is Different 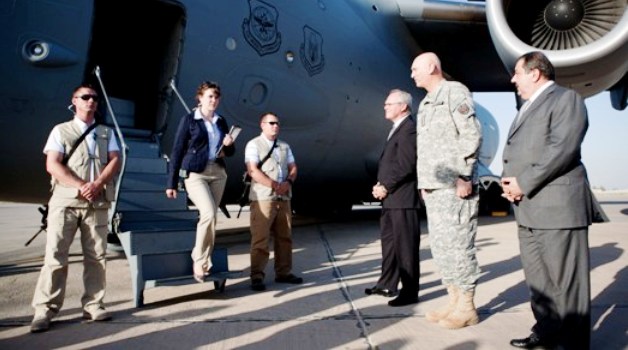 I spent July 4, 2009 and July 4, 2010 in Baghdad, Iraq. I was not there serving as a member of the military or the foreign service, but as the lead for Vice President Biden’s Advance Team.

My job was to arrive in Baghdad with a staff team, Secret Service and military personnel ahead of the Vice President (and in 2010, Dr. Biden), to work logistics and negotiations with the U.S. Embassy in Iraq, the Commanding General and staff, and the Iraqi government.

Vice President Biden’s visits were mainly business orientated: Meetings with Ambassador Hill, General Odierno and any special envoys who were in country, greeting embassy workers, and meetings with Iraqi heads of government.

But the 4th of July was reserved for U.S. troops. The mornings started with a greeting and breakfast with the servicemembers who worked at the JVB Hotel at Camp Victory. After that, the Vice President headed to Al Faw Palace to preside over one of the most moving ceremonies I’ve ever seen: a Naturalization Ceremony for active duty military. On both occasions, about 200 servicemembers were sworn in as American citizens, after serving their adopted country in uniform. And this happened inside one of the former palaces of Saddam Hussein.

Following the ceremony, we visited a dining facility at lunch time to eat with the troops. This was always scheduled for about an hour, but the VP did not leave until he had spoken with and taken pictures with every single person there—we couldn’t pull him away. The soldiers were so excited to see him; they took group photos and gave him mementos like miniature T-Walls and unit t-shirts, and asked him to sign photos of their families. Some people were shy, but the VP would go up and give them a big handshake and hug anway.

The dining facilities were decked out in more red white and blue than I have ever seen in one place. It looked like a party, and there were some cook-outs going on, but it was easy to see this was not the way the soldiers would have preferred to spend their holiday. There were no boat rides, no kids running around with sparklers, no families spending time together, and the only fireworks were the kind no one wants—mortar fire.

Though parts of my job were challenging, nothing compared to what the servicemembers that supported our visits, and their families, were going through. I was there 10 days at a time; they were there more than a year—repeatedly. My parents and friends panicked every time they’d hear the Vice President was wheels down in Baghdad; they didn’t realize that being with someone like the VP is the safest you can be in a country like Iraq. Not so for servicemembers: they were the ones making it safe for us.

And they were so young. In my job working for the Vice President, I was occasionally told that I was young for someone with so much responsibility. But my youth and responsibilities were very little when compared to the troops my counterparts and I worked with.

My trips to Baghdad changed my life entirely. I saw first-hand the skills, competency, and bravery that those who serve exemplify every single day—whether there’s a VIP visitor coming or not. I saw only a small fraction of the sacrifice and hardship they face, and it changed the way I look at service.

The dedication and support my team received from the U.S. military while on these trips is what led me to this job at VA. I chose to leave the Vice President’s Office for the Department of Veterans Affairs because I wanted to help reach out to Veterans, to help VA communicate to the troops that are leaving Victory Base Camp and returning to the U.S. as Veterans. My goal is to support and serve them just like they supported the Vice President and my team as active duty military.

This 4th of July, I will be at a cookout stateside, and there will be family and fireworks; but I will be thinking about the servicemembers in Baghdad and the price that’s being paid by them in order for me to be able to celebrate Independence Day.