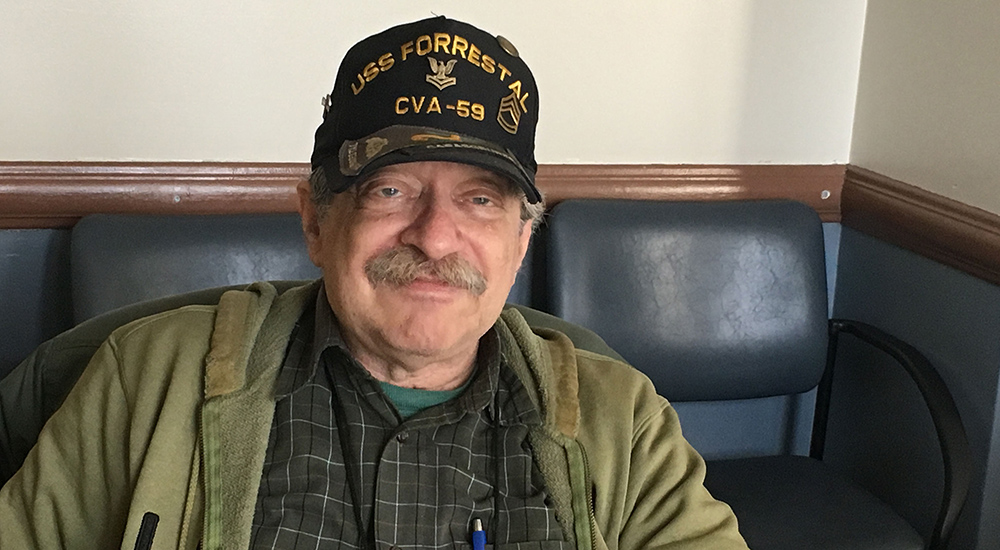 Navy and Army Veteran and LGBT Activist Denny Meyer (above) says, “People assume I’m an old straight man and say offensive things.”  Like what in a hospital setting?  Typically straightforward and to the point, Meyer says that in the past when explaining to a physician that some part of pre-colonoscopy prep at home would be problematic, the response was,  “You can ask your wife to help.”  That comment is offensive on many levels for Meyer.

Now 70, he came out as gay at the age of 15.  During his ten years of service during and after Vietnam he felt he was forced to keep silent about being gay, listen to crude anti-gay jokes and even pushed him to laugh at them to avoid being the target of homophobic violence on the part of fellow service members.  Why did he stay in?  “I loved the Navy.  It suited me,” says Meyer.  His service included work on an aircraft carrier in the Mediterranean, and duty at helicopter squadron headquarters. He left the Navy honorably as a Second Class Petty Officer.  Later, Meyer held a dual status in civilian-military position with the Army reserve and left honorably as a Sergeant First Class with ten years combined service.

After his years of military service, he moved to a civilian job in international marketing.   Meyer had a 20-year lifetime partner he describes as a “beautiful, brown Filipino man,” who died of AIDS.  I cared for him for four years until his death,” says Meyer. He describes the hurtful indignity he experienced when, in 2002, he told a VA Primary Care doctor he had not seen before, that his partner had died of AIDS.  “And, the physician dropped everything, jumped back ten feet, put on rubber gloves and got rid of me as quickly as possible.” Meyer acknowledges that advances have been made in increasing LGBT Cultural Competence since that time.

Time to repay his country

Meyer’s parents were WW II Jewish Holocaust refugees from Germany.  His father, an attorney, fled from his native Berlin coming to New York. His mother arrived in New York as a penniless, illegal immigrant from Frankfurt.  She became a cleaning lady as she learned English.  She retired 60 years later as a shopkeeper.

His parents met in New York, married and lived in the German Jewish refugee community on the far Upper West Side of Manhattan.  Meyer grew up in the late 1940s and through the 1950s in this refugee community.  In 1968, by then, in college in Florida, Meyer says, “I saw my fellow American students who took their freedom for granted burning the American flag. Meyer remembers saying, “It’s my time to pay my country back for my family’s freedom.” Then he joined the Navy.

Meyer frequently talks about himself as “an old man.”  Somehow, he manages to get around from his home in Queens dealing with the inconvenience of Access-a-Ride.  He has a Navy man’s discipline.  Very admirably, he keeps his spirits up. And, his outspokenness seems undiminished.  He is very communicative despite many physical problems.   Meyer has been coming to VA’s New York Harbor for medical attention for years.  His experience is not all perfect, but on deeply significant, life-saving care, he is very positive about VA’s Manhattan Campus.  He has spinal stenosis, spinal damage from having jumped out of helicopter gunships during Vietnam and serious cardiac problems, including an inoperable cardiac aneurysm.  Ten years ago, he had major surgery for bladder cancer.

Dedicated to equal rights for all

A wonderfully irascible New Yorker, Meyer’s background is consistent with his commitment to advocacy for equal rights.  He is president and founder of the New York Chapter of American Veterans for Equal Rights (AVER).  Created in 1990, the national organization is advocating for the needs of the LGBT military community in its fight against discrimination in military service and benefits.  AVER is dedicated to equal rights for all present and former members of the US Armed Forces and their Families.

As a representative of AVER, Meyer is tireless and generous in volunteering his time to explain the need for change and openness to include the LGBT community equally in all services and benefits provided to those who serve and have served.

Toward realizing this vision, Meyer speaks at training sessions for clinicians and is very willing to talk one-on-one with graduate students completing papers that support understanding and acceptance of LGBT service members and Veterans equal rights and treatment under the law.  Among other key elements of LGBT Cultural Competence, he wants people to be aware of issues such as transgender discrimination.  He stresses the importance of acknowledging “Gay PTSD” that relates to the suffering of LGBT survivors who “lost 99 percent of their friends” before today’s treatments were developed.