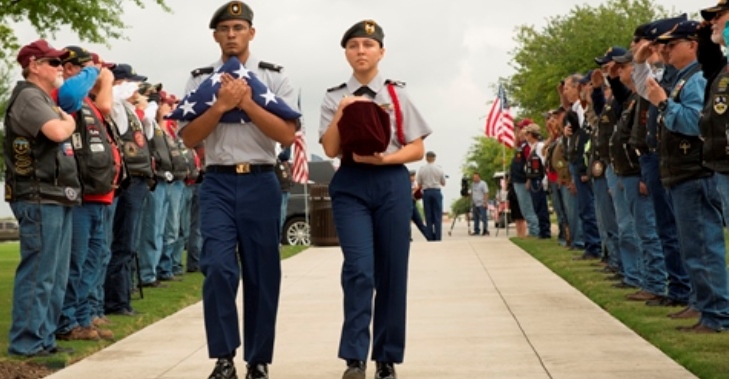 While the city of San Antonio was gearing up for its annual Fiesta, San Antonio Veterans had a more somber event to attend to just north of downtown at the Fort Sam Houston National Cemetery.

A military ceremony was held for unclaimed cremains of five Veterans from Potter County (Amarillo), Texas. The Veterans are:

The journey for these Veterans was started by the Missing in America Project, a non-profit dedicated to finding family of deceased, and providing a proper burial for Veterans.

The project’s Texas State Coordinator Joyce Earnest said the five had no family. “These Veterans were alone when they died,” Earnest said. “But we put them to rest in their rightfully-earned final home.”

Getting them to that home was arduous for Earnest who started with a list of 92 names. She began cross referencing data at a VA in Missouri to check for eligibility. Out of 92, six were Veterans; one was reunited with his next of kin. The process of identifying these patriots took a total of eight months.

Although alone at the time of their passing, the five Veterans were escorted to San Antonio by their Veteran family, The Patriot Guard Riders. They escorted them from Potter County, Texas to Fort. Sam, a distance of 485 miles. Some of the San Antonio Chapter riders even went up to Amarillo to oversee the ride.

Deputy State Captain of the Patriot Guard, Jean Clark said they owed that trip to their Veteran brothers. “When a Veteran passes and does not have any family, we fill in for them,” Clark said. “We become their family.”

Before you could see the funeral procession, a roar of 40 motorcycles broke up the normally dead silent hallowed grounds of the Fort Sam Cemetery. The Patriot Guard’s presence was confirmed by the sea of red white and blue, which prompted attendees to stand and await their arrival. The hearse pulled into the ceremonial area, encircling it, with their loyal escort in tow. The riders parked, and gathered in a grassy area, hugging and congratulating one another … the honorable mission now safely complete.

With what must have brought back memories of service to even the most senior in the group, Clark and the other leaders barked out orders to assemble. Male, female, old and young, wearing their respective service memorabilia, assembled shoulder to shoulder, preparing for the last small portion of the Veterans’ journey.

The cremains were cloaked in red velvet satchels and in an almost symbolic passing of the guard, each set of remains was carefully exchanged from the very senior Patriot Guard members to the youthful Douglas MacArthur High School Junior ROTC who walked the cremains through the waiting members of the guard who synchronously rendered their salutes.

It’s an impressive show of patriotism that Clark says without question is a mandatory service to Veterans.  “Most of us are Veterans, some of us are not, but we don’t care. Some of us ride motorcycles, and some of us do not, and we don’t care,” Clark uttered emotionally.” All we require is that you have a desire to honor Veterans, and you do it in a dignified manner.” “The Patriot Guard Riders is all-voluntary, so there are 330,000 that don’t get paid. That’s amazing,” Clark added. “We donate our time, our resources; our hearts to make sure no Veteran goes alone.”

The cremains were assembled in a viewing area, each accompanied by a U.S. flag. The flag detail read aloud the history of the flag-folding ceremony, while the folds were completed by active duty members of the Veterans’ respective branches. Once complete, rifle volleys rang out, setting off the playing of taps by the Ceremonial Services Detachment.

The crisply-folded flags for each Veteran were presented to the guests standing in as family, one of those deservedly being Joyce Earnest.

The ceremony was a relief for Earnest, her hard work, playing out before her. Addressing the attendees, she acknowledged there is more work to be done. “We need to blanket every mortuary in this country,” Earnest said. “There are Veterans languishing on shelves that need us, they need America.”

That call to action was echoed by Judge Tanner, whose willingness to assist made the interment a reality. “We are Americans,” the judge exclaimed. “This is really important that we are finally putting these Veterans to rest.” She added that the country owes them that for sacrificing so much, even their identities.

Clark said there are an estimated 30,000 Veteran cremains needing to be identified.

Earnest, whose husband Tom is a Veteran and member of the Memorial Services Detachment, has a place reserved in the same cemetery she painstakingly arranged for the Veterans interred that day. “By the time I am laid to rest in these hallowed grounds, I hope there are no longer any unclaimed remains.”

Korean War Veteran John Heinesh, who has come close to his own mortality on a few occasions, knew attending was important and treated it like a duty. “Out at my ranch, we hold official wreath and flag burnings, to dispose of them properly” Heinesh said. “Always, always do for the Vets, anything for the Vets” he said, adding that although he regretted not being able to re-enter the service after the war, he was proud he was able to accomplish his goal of becoming a soldier, a dream he had since he was a boy.

This outpouring of patriotism and support humbles Fort Sam Houston Cemetery Director Elfrieda Robinson, but it does not surprise her. “We are so fortunate to have such strong support from the community,” Robinson said. “They and their families are the reason we are here, and this community deserves nothing but the best and our best service to them.”

What might normally be a melancholy event for all intents and purposes turned into a day that a community came together and brought their soldiers home.