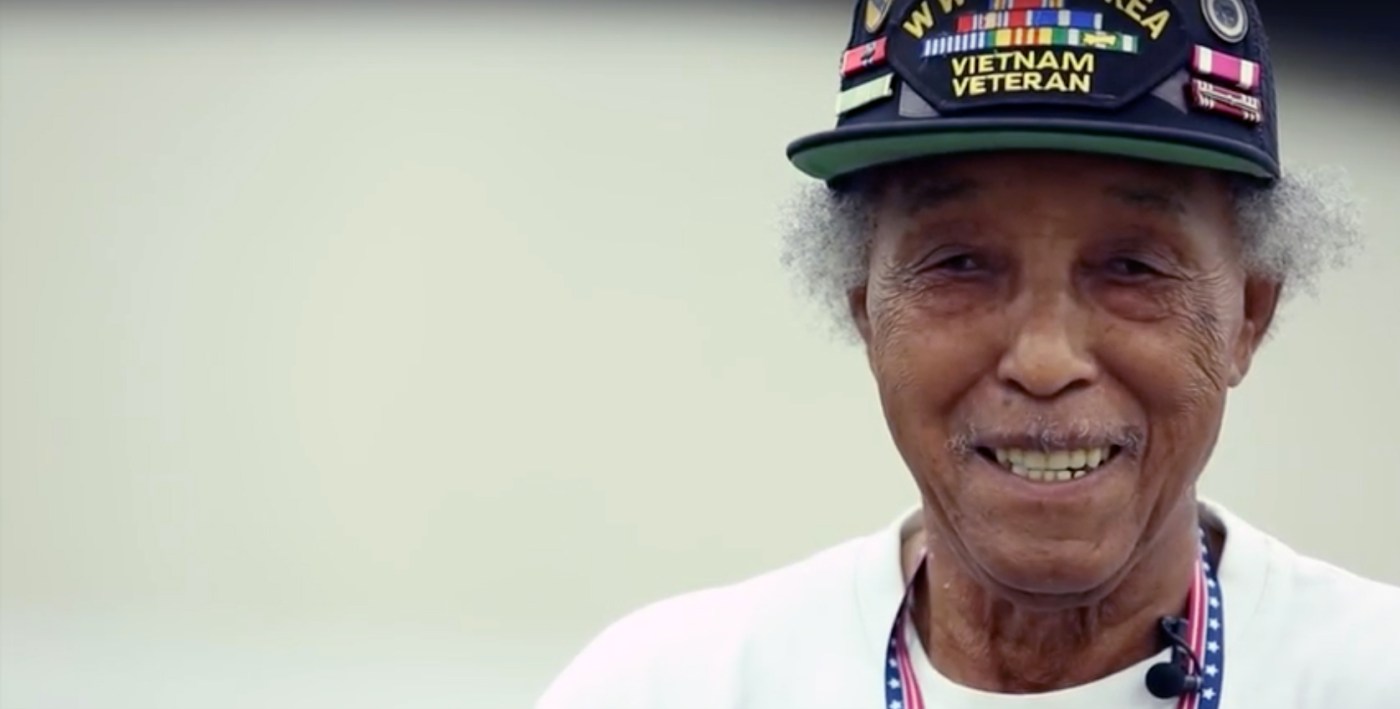 Ira L. Walton was making ladies hats in Waco, Texas, when he got the draft notice for World War II.

So he went. Then, he stayed.

“Thirty-one years in the military and never wounded. I was only out for 88 days. They stopped fighting and I was honorably discharged in December 1945 as a corporal. Found out I could make more money in the military and they were glad to have me back, so I went back on March 28, 1946.”

Walton, 94, a Veteran of World War II, Korea and two tours in Vietnam, was the second oldest competitor at this year’s National Veterans Golden Age Games in Biloxi, Mississippi. This was his 28th year at the event and he competed in shuffleboard, horseshoes and his top game – table tennis, where it’s almost unfair to his competitors. Ira still plays, five days a week.

“Sometimes I feel sorry for the people I beat,” he said.

Walton is at the top of his game on both fronts. He arranges all his travel and flies out by himself. Recalling his time in the military, he names exact dates and military units throughout his lengthy career.

He grew up in Waco, Texas, where he won a state championship in tennis during high school and earned a scholarship to a small, local college.

“It didn’t cost a lot of money, and I knew it was valuable, but my mother was still going to have to pay some cash money. I knew she didn’t have it, so I quit to work at the Progress Laundry. It was 40 cents an hour, but then I got another job working down the street on ladies hats for 45 cents an hour. I’d get the raw felt, put it on the block for any shape you wanted and put it in the steamer. I could make a hat a minute.”

He was drafted in 1943, and excelled at the written and physical entrance exam. Walton’s success led to the Army-Air Corps where he nearly became a pilot.

“They sent me to Biloxi for pre-aviation cadets on their way to Tuskegee. I passed those tests, too, and the reviewing officer asked if there was anything we missed. I figured if I didn’t tell him and they found out later, I’d get in a whole lot of punishment, so I told him I had hay fever.

“He drew a big red ‘X’ on my form and said, ‘You can’t fly a plane if you’ve got hay fever. I could, but they were looking for any excuse.”

Since his brother, Winger, was fighting in Africa with the 92nd Infantry Division, he got a transfer to the Army. He was sent to jungle training at Schofield Barracks in Hawaii with plans to fight in the Pacific, when the war ended and he got his first discharge. When he came home, the Army sent him to Germany and then Austria.

“They were really hospitable there,” he said. “They appreciated us and treated us really nice.”

Sometimes, that was better than the treatment he got from others in the Army.

“Out there in the field, they could treat you pretty bad,” Walton said. “(Racism) was just something you accepted; something you faced.”

President Harry S. Truman desegregated the military in 1947, but when war broke out in Korea, Walton landed in Inchon and was part of the all-black, 519th Trucking Company.

“We were all black and the officers were white, but segregation had been ceased,” he said. “They reassigned three individuals to us – all white – who were mechanics in the motor pool. Our sergeant told us, ‘You’re all the same,’ and that’s how we treated each other.”

Walton, still a corporal, drove Soldiers and supplies across the country.

“We went across the 38th parallel and had permission to drive as fast as the dirt roads would let us, hauling everything – winter clothes, individuals, food and money. People liked us because instead of marching we could transport them around.”

There was one near miss when a phosphorous bomb exploded in front of one of his trucks, rocketing shrapnel into the passenger seat, but no one was sitting there.

“That would have gotten someone for sure,” Walton said.

“We moved into another area that was cleared and started to relax a bit. We started a little poker game and some guys went down to the river to get washed up,” he added. “By then, the Chinese were in the fight. They were hiding and looking right at us and started lobbing mortar shells. I ran and found a foxhole. A mortar shell would come in and explode. I’d raise up my head to see where it hit, I’d hear another and get back down.

“I thought of my mother’s words: ‘Get out.’ Don’t know why I didn’t take her advice. But later, when the mortar shells stop, you think everything is OK. And the military was a steady job.”

After 14 months as the acting noncommissioned officer in charge, an officer asked Walton if he would extend in Korea for six months. He declined.

“So he relieved me of that position, put someone else in and promoted him to sergeant the next day,” he said. “That was a horrible thing to not give it to me after 14 months.”

Walton moved back to Fort Hood, Texas, and married Christine, a girl from his hometown of Waco. Several assignments followed, and so did the promotions.

Ira Walton competes in table tennis at the National Veterans Golden Age Games. At 94, he was the second oldest competitor at the event where nearly 800 Veterans participated in 2017.

Walton was stationed in Germany as a sergeant first class, when his brother was mortally wounded in Vietnam. He got emergency leave in time to see him before he died.

“He was a master sergeant,” Walton said quietly. “A mortar shell flew right into his living quarters.”

Walton finally retired from the Army on Jan. 31,1974, as a Chief Warrant Officer 2 and went to work processing claims for VA. The Army contacted him nine months later when they realized he should have been promoted to Chief Warrant Officer 3. They changed his retirement date and gave him back pay. Walton continued working at VA until his retirement from federal service in 1988.

“I enjoyed that a lot,” he said. “I was helping other Veterans. I loved that job and the care from VA in Central Texas. The medical center and I have a fantastic relationship.”

In 1990, two years after VA retirement, he went to his first Golden Age Games where he competed in table tennis, checkers and dominoes.

Ennis Charleston, a recreation therapist assistant, said that’s why Walton is a legend around the medical center.

“Look, the guy travels by himself and is totally independent. He carries on a conversation like he’s known you his whole life. He does everything on his own. That is a magnificent, wonderful, amazing thing. Everybody knows him, and everybody looks up to him.

“We have some Gulf War Veterans come in for therapy. They start getting on the cycle or rowing and talk about shoulder pain and knee pain, and we all look at Ira. They get to seeing him, and they know — no matter what your disability is, no matter what your aches and pains are, just talk to him and he’s an inspiration.”

Walton just laughs at that.

“I don’t know why I’m still going,” he said. “I guess it’s just church and clean living. Plus good, home cooking. I make homemade stew, and my kids and grandkids and great, grandkids all love that. And when you make stew, you’ve got to make corn bread. I make it all from scratch.

“It’s a secret recipe, and it’s gonna stay a secret.”

If stew and cornbread are Walton’s ingredients to success, competitors need to look out for next year because he is already making plans.

“When I get back home, I’m gonna start walking again. I need to do some conditioning to get ready for the 50-yard dash. I’m going to run it, but you have to work your heart up to that.”