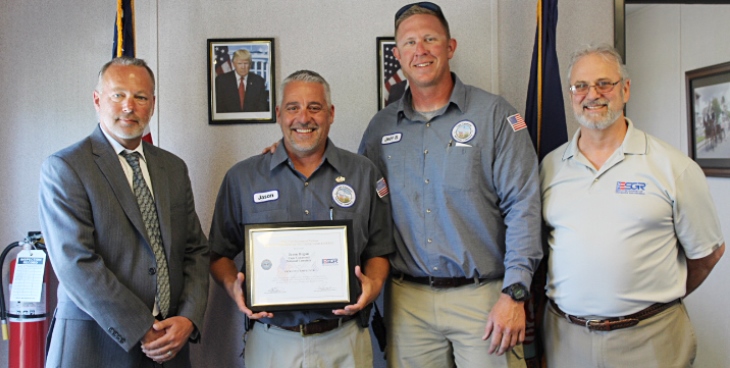 Cape Canaveral National Cemetery foreman Jason Hogan was recently recognized for his commitment to America’s citizen-soldiers with the presentation of a Patriot Award, which honors supervisors who provide extraordinary support of employees serving in the National Guard and Reserves.

Hogan was nominated by Air Force Tech. Sgt. Jeffrey Brawner, a member of the 202nd Red Horse Squadron, Camp Blanding, Florida. Brawner, also a cemetery caretaker, who said he applied for his current position long before he was ordered on an eight-month deployment that included Qatar, United Arab Emirates and Iraq.

“With everything being up in the air, as to who is actually going and when I may leave, I was really nervous that this may ruin my chances of working for such a wonderful organization,” Brawner said. “But in the end, after the interviews, I had the chance to explain my situation and informed Jason that while I appreciate the opportunity, I would be leaving for quite some time. He was very appreciative and understanding during the entire process even to go as far as calling human resources on my behalf so that I could be informed of my status while gone and any available entitlements. I couldn’t ask for a better supervisor or organization and would like to thank Jason and NCA for this opportunity.”

Hogan, an Army Veteran, said Cape Canaveral National Cemetery is proud to be an employer that believes in the welfare of its employees.

“In addition to supporting services to our Veterans, we are committed to a work environment that promotes equal employment opportunities,” Hogan said. “We wanted to give Jeffrey a peace of mind. Most of our staff are Veterans and have deployed on short notice, so we empathized with his situation. We were happy to assist Jeffrey.”

Shawn Graham joined VA in March 2016. He retired from the U.S. Navy at the rate of chief mass communication specialist with nearly 21 years of service. He deployed several times as a communication and public affairs asset in remote areas which included Afghanistan, Uganda and the Democratic Republic of Congo.